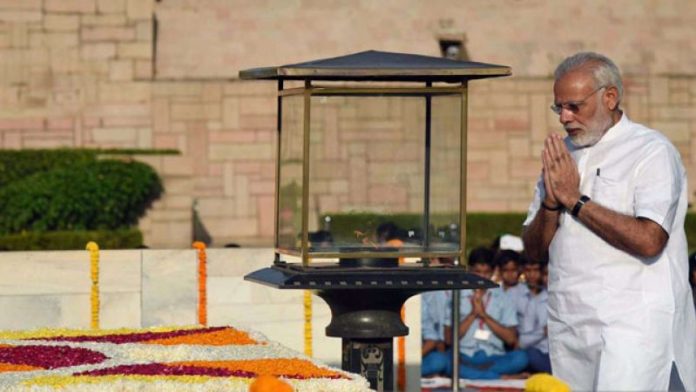 PM leads nation in paying tribute to the Mahatma

New Delhi: Prime Minister Narendra Modi on Wednesday led the nation in paying respect to Mahatma Gandhi on his 150th birth anniversary by paying tribute to the Father of Nation at the Raj Ghat here.

He stayed for some time at the Raj Ghat where an all-faith prayer meeting was being held.

“Tributes to beloved Bapu! On #Gandhi150, we express gratitude to Mahatma Gandhi for his everlasting contribution to humanity. We pledge to continue working hard to realise his dreams and create a better planet,” he tweeted.

Later, President Ram Nath Kovind and Vice President Venkaiah Naidu too arrived at the Raj Ghat to pay tribute to the Mahatma.

Earlier, Congress interim President Sonia Gandhi and former Prime Minister Manmohan Singh too arrived at the memorial ground where the Father of the Nation was cremated to offer their tribute.

PM Modi then went to Vijay Ghat to pay tribute to Lal Bahadur Shastri on his 115th birth anniversary.