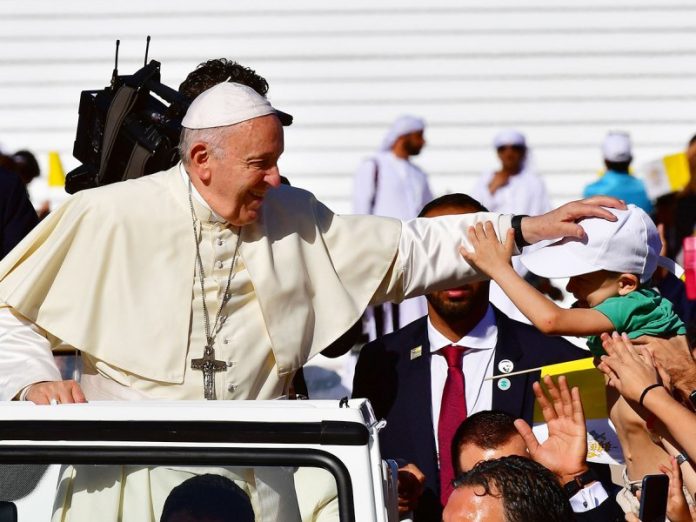 Abu Dhabi: The Head of the Catholic Church His Holiness Pope Francis was seen off at the Presidential Flight by His Highness Shaikh Mohammad Bin Zayed Al Nahyan, Crown Prince of Abu Dhabi and Deputy Supreme Commander of the UAE Armed Forces, and a host of other UAE shaikhs, ministers and dignitaries.

Shaikh Mohammad praised Pope Francis for his role in establishing the foundations of world peace, fraternity, tolerance and humanitarian dialogue. He also expressed his thanks and appreciation for his passionate participation in the various events and initiatives as part of the Global Conference of Human Fraternity.

The Abu Dhabi Crown Prince went on to laud the launch of the ‘Human Fraternity Declaration’ signed by the Pope and His Eminence Dr. Ahmad Al Tayyeb, Grand Imam of Al Azhar Al Sharif, which seeks to build bridges of love, amity and coexistence among peoples. Shaikh Mohammad was presented with a copy of the Declaration from the Pope before his departure.

It is customary for the Pontiff to send telegrams to Heads of State of the countries over which the papal plane will be flying over as travels. In a message to President His Highness Sheikh Khalifa bin Zayed Al Nahyan, Pope Francis said, “As I depart from the United Arab Emirates, I renew my deep appreciation to Your Highness, the government and the people of the UAE for your warm welcome and generous hospitality. I assure you of my prayers and invoke upon all of you abundant divine blessings,” the message said.

Pope Francis has delivered a groundbreaking Papal Mass to more than 180,000 Catholics in the United Arab Emirates.

The scale of the event, which took place at Zayed Sports Stadium in Abu Dhabi, is unprecedented for an event of this kind in the Arabian Peninsula and saw tens of thousands come from every corner of the UAE and overseas to participate.

To ensure the safety and security of everyone attending this historic occasion, multiple UAE Government authorities worked in close partnership with the Apostolic Vicariate of Southern Arabia, AVOSA, the territorial jurisdiction of the Catholic Church covering the UAE, Oman and Yemen.

His Holiness greeted the excited and jubilant crowds as he made his way into Zayed Stadium to conduct the Mass.

The Catholic Mass, known more fully as the Most Holy Sacrifice of the Mass, is the central liturgical ritual in the Catholic Church where the Eucharist, or Holy Communion, is consecrated. Tuesday’s Mass began at 10:30 a.m. and lasted for 90 minutes and was broadcast on giant screens within Zayed Sports City and simultaneously streamed live on the internet – allowing Catholics who were unable to attend to celebrate this historic event.

‘This celebration was a source of great joy to me’

His Holiness Pope Francis, Head of the Catholic Church, today delivered a Holy Mass in front of 170,000 worshippers who gathered inside and outside of the Shaikh Zayed Stadium to participate in a historic moment for locals, residents and the visitors of Abu Dhabi.

Delivering a greeting at the end of the Mass, Pope Francis said: “Before concluding this celebration, which has been a source of great joy to me, I wish to extend my affectionate greeting to all of you who have participated; the Chaldean, Coptic, Greek-Catholic, Greek-Melchite, Latin, Maronite, Syro-Catholic, Syro-Malabar and the Syro-Malankar faithful.”

“I sincerely thank Bishop Hinder (Apostolic Vicar of Southern Arabia) for the preparations of this visit and for all his pastoral work. A warm thanks also to the Patriarchs, Major Archbishops and all the other Bishops present, to the priests, consecrated persons and to so many lay faithful who are deeply committed, with generosity and a spirit of service, to their communities and to the poorest.”

“May Our Most Blessed Mother Mary sustain you in your love of the Church and in your joyful witness to the Gospel. Please, do not forget to pray for me. Thank you!,” the Pontiff said in conclusion.

A people united in peace
In a world torn apart by so much differences, going in different directions, unity can be elusive.

There’s an antidote: The union of married couples who bear each other’s burdens, the union the UAE represents, a people united in peace, mutual respect, tolerance and love, in a kind of union that liberates the human person.

The Holy Father prayed: “Look not on our sins, but on the faith of your Church and grant us peace and unity of your kingdom, where You live forever and ever.”

He invoked the mercy of the “Lamb of God, who takes away the sins of the world.”

On this visit, the Pope is joined by Patriarchs, Cardinals, bishops and religious men and women from different parts of the world.

During the announcements, Bishop Paul Hinder, who is based In Abu Dhabi, said: “You have come to us as a pastor, for the migrant workers here. We renew our loyalty to the successor of Peter.”

The bishop also recalled the encounter in the year 1219, between Saint Francis and the Sultan of Egypt.

“We wish you and your entourage a safe trip back to Rome.”

During the announcements, Pope Francis also thanked “the children of Zayed and the House of Zayed.”

Finally, to the warm applause of the congregation, the dismissal came: “Go in peace, glorifying the Lord by your life.”

The service is now over.