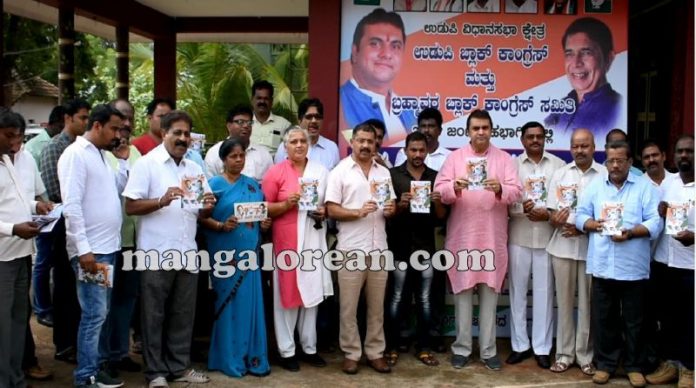 Udupi: As a state-wide call from Karnataka Pradesh Congress Samithi the Udupi district congress on Saturday, September 23, inaugurated “Mane-Manege Congress” (Congress for every home) to strengthen the party at the grass-root level in the run-up to the 2018 Assembly elections.

The district minister in charge Pramod Madhwaraj inaugurated the “Mane-Manege Congress” campaign at the labour colony Kannarpadi near Kinnimulki. The minister visited the houses and handed over booklets released by the KPCC which aims at informing households about the benefits they have received under various welfare schemes – Anna Bhagya, Ksheera Bhagya, Pashu Bhagya, Arogya Bhagya, Krishi Bhagya, Vasathi Bhagya, Vidya Siri, midday meal, scholarships, and a large number of rural and urban development programmes.

Speaking on the occasion Pramod Madhwaraj said that, Congress has decided to reach every house in all the 224 Assembly constituencies in the state through booth-level agents in order to spread the party’s message and inform people of the achievements of the Siddaramaiah government. The Siddaramaiah government which is the only government in the country has made tremendous developments in every section of the people. Booth-level Congress workers will educate people on the achievements of the party government in the state and ‘failures’ of the BJP-led NDA government at the Centre as part of the campaign. The party has already formed booth-level committees for this purpose, he added.