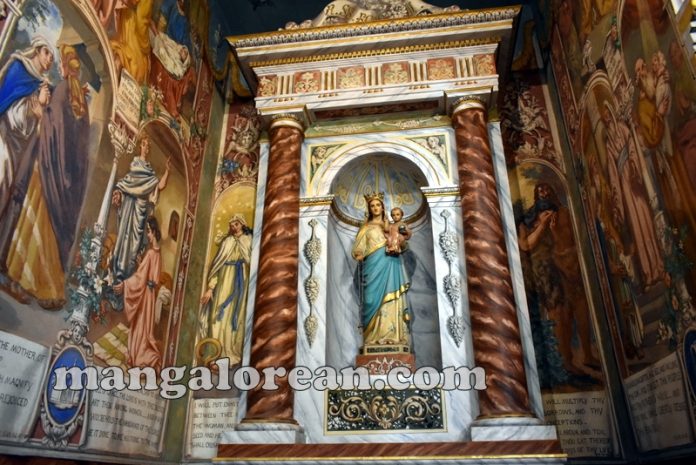 Mangaluru: Today, Saturday 16 February will be a great day in the history of the Jesuit run St Aloysius Institutions, Mangaluru, when the Re-Dedication of World Class St Aloysius Chapel Paintings by Italian artist Antonio Moscheni, after Extreme-Makeover/Restoration will be inaugurated at 5 pm. The Chapel will be blessed by Rev Dr Francis Serrao SJ, Bishop of Shimoga. Nilabh Sinha, Principal Director, INTACH Conservation Institutes (ICI), Art & Material Heritage Division, New Delhi, will unveil the commemorative plaque. Mrs Silvana Rizzi, from Milan, Italy, the great grandniece of the painter Antonio Moscheni will preside over the function. be present at the function.

The chapel of St Aloysius College of Mangaluru was transformed into an admirable work of art by the Italian Jesuit Brother, Antonio Moscheni SJ. He was a proficient painter trained in the famed Accademia Carrara in Bergamo, Italy. The Chapel was built by Jesuit Missionaries in 1880 and its interiors painted by Moscheni in 1899, during the Mangalore Mission in 1878. The Italian Jesuits played an important role in education, health, and social welfare of the Mangalorean Catholic community and built the St. Aloysius College in 1880, St Aloysius Chapel in 1884, and many other institutions and churches.

The interior of the chapel decorated with paintings by Antonio Moscheni (1854 –1905) that cover almost all of the walls, which is unusual in chapels in India. The paintings are preserved by a recognised board of the nation which maintains and restores all historic artefacts. The central row of paintings on the ceiling depicts the life of Saint Aloysius Gonzaga, to whom the college and chapel are dedicated.

Aloysius earlier life is shown in the first three panels from the rear, the paintings include: Aloysius as a child promising at the Altar of Mary in Florence to dedicate his life to God; Aloysius preaching about God to his townsfolk; Aloysius’ first communion; and Aloysius seeking admission to the Jesuit Order. The rest of Aloysius’s life is depicted on the wall above the altar. The central picture depicts him serving the plague stricken in Rome. He contracted the disease and died, at the age of 23.

The sloping ceiling panels portray the Apostles, with floral garlands weaving through the panels. No two garlands have the same flowers. The angels who hold the garland are life size. The upper arches depict saints of the Church. The lower arches depict Jesuit saints. These paintings include : St. Thomas, Apostle of India, with a spear in his hand; St. Francis of Assisi Patron of environmentalists; St. Peter Claver, who served the slaves when they arrived in Cartagena, Colombia, making them feel through his care and love that they were his equals, on the fourth left arch; Bl. Rodolfo Acquaviva, who went to the Court of Akbar, and was there held in high esteem; and St John de Britto the first missionary to wear the dress of a sanyasi as a sign of inculturation. He was a scholar who studied Sanskrit, Tamil and Indian customs.

The painting on the rear wall shows Jesus as the friend of children. It is considered to be the masterpiece of Moscheni. Due to seepage of rain water the painting was covered with fungus and calcium carbonate crystals. It has now been restored but a patch of the un-restored painting has been left untouched below the woman seated at the right.

There are also many paintings which take up the life of Jesus, like the -The birth of Our Lord on Christmas night; Jesus being baptized by St John the Baptist

The wedding feast at Cana, where Jesus changed the water in the six pitchers into wine; The Crucifixion of Jesus between two thieves on Calvary. Mary, the Mother of Jesus and Magdalen, are at the foot of the Cross. A soldier, Longinus, pierces with a lance the side of Jesus. The artist’s controlled use of light shows that there was darkness and lightning.

Now coming to the most informative part of this report – How the Chapel was painted? There are two types of paintings in the chapel: fresco and canvas. A fresco is painted on fresh wet lime plaster walls. The colours get embedded in the lime plaster as it dries up. Frescos cover about 600 square metres of the walls of the Chapel. For an oil painting, the colours are made by mixing pigments with linseed oil. The canvas is made of pure linen of strong close weave. The paintings on the ceilings in the Chapel (about 400 square metres) are in oil on canvas.

With the passage of time the paintings suffered damage due to the humidity and dust and the deterioration had set in. The stitches of the canvases had given way. The canvases were taken down with the help of a special cradle, the paintings were conserved scientifically by removing dust, dirt, and chemical cleaning that revealed the true colours of paintings which were hidden underneath. The pieces were restitched and the joints were reinforced. After re-stretching the canvas on the frame the paintings were put back in place. The work of restoration was done by specialists of INTACH from 1991 to 1994 under the guidance of Dr O.P.Agrawal.

Speaking to Team Mangalorean about the Re-Dedication of the paintings of the St Aloysius Chapel, Fr Dionysius Vaz SJ, the present Rector of St Aloysius Institutions said, ” Italian artist Antonio Moscheni, within just two and a half years had completed the work of painting the whole church, covering a total of 829 sq. meters, with exquisite frescoes and canvasses. All these paintings were badly damaged by rain water seeping through the walls, dust and fungal growth. The paintings were restored by specialists from INTACH-ICI, Lucknow from 1991 to 1994 under the supervision of Dr Agarwal, the then Director of the INTACH-ICI, Lucknow. Dr Agarwal had told us that the paintings need to be examined every 20 years. Hence at our request Nilabh Sinha, Principal Director, INTACH Conservation Institutes (ICI), Art & Material Heritage Division, New Delhi, visited the Chapel. He gave a status report of the paintings and made suggestions for their conservation. The general condition of the paintings he said is fair in the sense that despite their age, about 140 years, the process of deterioration is slow owing to previous conservation”.

“However, signs of deterioration have started to show in almost all the cases; the paint layer is losing adhesion, cracks in the paint layer are present, many paintings show losses in paint layer, tears, bulging, opening of seam, etc. The time needed for the restoration was said to be 18 months and the estimated cost would be around Rs 1.5 Crores. A team of restorers, made up of specialists in murals and canvasses, from New Delhi were deputed for the work. They set up a Site Conservation Laboratory and started work on the lower side walls till a scaffold having a flat platform was erected for the conservators to stand and work without any accidents” added Fr Vaz .

“The work on the paintings was done after careful study to decide on the treatment needed in each case. The oil paintings were treated without removing them from the ceiling. Nilabh Sinha paid regular visits to study the progress and monitor the quality of the work. An Italian visitor, a painter by profession, had remarked that the restoration work done was very good. The work was completed earlier than planned as more persons were put on the job than planned in the beginning. Hence the work was completed at the end of December 2018. The illumination of the paintings has been redone with special lights which will not damage the pigments or the bonding materials” said Fr Dionysius Vaz SJ.

Antonio Moscheni was born in the village of Stezzano near Bergamo, Italy on 17 January 1854. His artistic ability was discovered early and he was sent to the famed Accademia Carrara in Bergamo. He studied under able masters and acquired considerable proficiency in the art of painting. He then went to Rome to study the masterpieces of the Vatican. Fresco painting now became his passion. In 1889, Antonio renounced a painting career and took up religious work. But his religious superiors did not wish his talents to be lost and ordered him to paint several churches in Italy before sending him to Mangaluru, to the Chapel of St. Aloysius College. It took him a little over two years to cover the walls and ceilings of the Chapel with paintings.