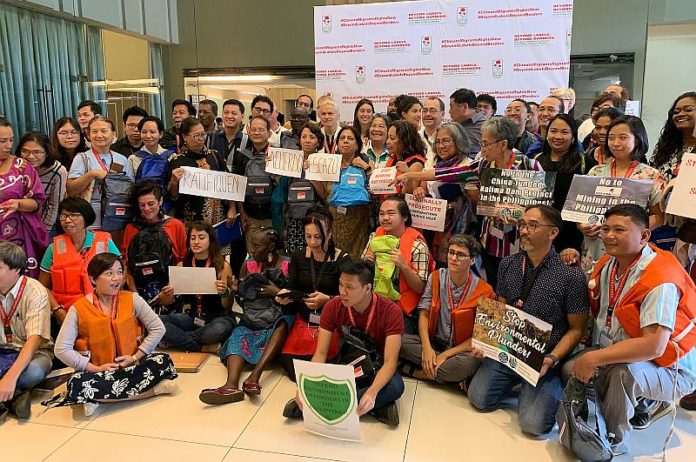 The writing is on the wall: rich countries, whose wealth and progress is at the cost of resource exploitation of conquered nations and the unabated combustion of fossil fuels for energy, must bear the onus of climate action. However, commitments from these governments have been lacking owing to a refusal to acknowledge their moral responsibilities and ecological debt, as well as due to strong lobbying of corporations. 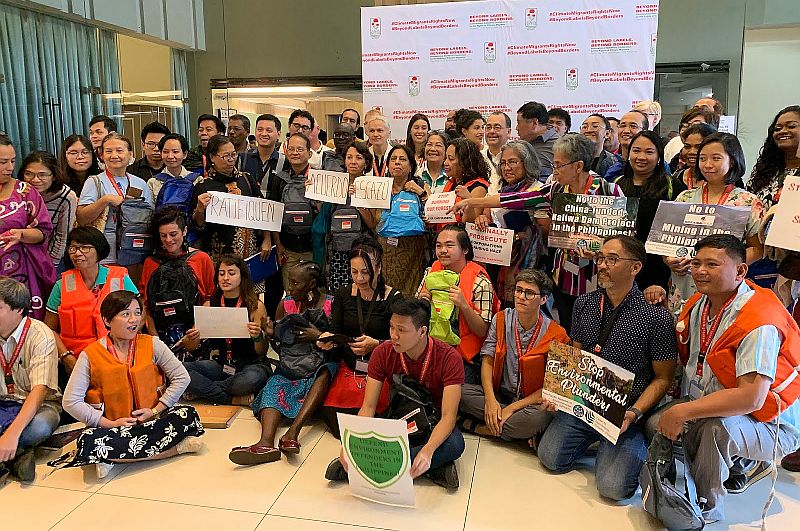 As corporations and financial institutions stand to benefit from the status quo, governments and international bodies are predisposed to favour proposals to operate on a “business as usual” scenario by employing false solutions to the climate crisis.

“We strongly oppose these measures as they do not address the real causes of climate change and threaten to derail the little progress we have made in solving this catastrophe” states Manila Initiative on rights of climate migrants, adopted at the International Solidarity Conference on the Rights of Climate Migrants (Beyond Labels, Beyond Borders) in Manila, Philippines.

“When it comes to climate change, the Philippines is one of the most vulnerable countries in the world. Five years after typhoon Haiyan (also known as super typhoon Yolanda) people are still living in makeshift tents, people still have no livelihood – there is really evidence of government neglect. On the other hand, because of Typhoon Haiyan, there was massive international humanitarian relief to the extent that the Philippines was struggling to absorb the relief pouring in from around the world. This relief was not going directly to the people most affected but leaked out due to corruption. Struggle and hardships continue for those affected communities even after five years now. No one is taking the responsibility and calling for accountability on what will happen to climate migrants after the relief has gone” rightly points out Tetet Nera Lauron, Advisor to Rosa Luxemburg Stiftung, that joined forces with Kalikasan, International Migrants Alliance and Asian People’s Movement on Debt and Development to host #ClimateMigrantsRightsNow global meet.

ONE STRUGGLE, MANY FRONTS!

“We tried to build upon our networks, to help facilitate other co-organizers from different communities develop the agenda, take ownership of the process and join forces to organize #BeyondLabelsBeyondBorders meet. We tried to bring people leading the climate, development, migration and other areas around the same conversation on #ClimateMigrantsRightsNow. One struggle, many fronts! We are all here for a comprehensive restructuring of our societies, economies, but there are some specificities related to specific issues – but together we could join forces to develop coherence on linking key issues around climate change-induced migration” shared Tetet Nera Lauron in an exclusive interview with CNS (Citizen News Service).

WHY ARE POOR PEOPLE MORE VULNERABLE TO CLIMATE DISASTERS?

Impact of climate change on our lives is growing manifold with an increase in both slow and sudden onset climate crisis events. “For sudden-onset events, the humanitarian response has always been the go-to option as it is the default mode of the international community. But as we heard in the conference humanitarian response also has its limits with donor fatigue being one of the challenges. Humanitarian response is still important and relevant, but it is not enough to find answers to difficult questions of why are poor people more vulnerable in the first place? Japan, for instance, has faced many natural disasters and climate events as well as nuclear disasters, but Japanese people are not migrating in massive numbers. So, there must be something within the Japanese economy and the way Japanese society and government is organized that gives support to the people if such disasters or occurrences happen. We do not find those support mechanisms in our countries, so people are forced to move away from their original communities,” said Tetet Nera Lauron.

“We have been pushing for conflict of interest policy within the global climate treaty (formally called the UN Framework Convention on Climate Change – UNFCCC), but unfortunately it has not progressed much. We cannot have oil or fossil fuel companies negotiating about climate policy because there is a fundamental conflict of interest. Fossil fuel companies would never push for laws that would regulate their profit-seeking activities. Big countries supported by a strong fossil fuel lobby are effectively blocking any meaningful discussion on conflict of interest policy. There is really a corporate capture of this UN space for climate change treaty negotiations. We need to take the battle elsewhere – if we cannot get results from the UN bodies then we need to hit the fossil fuel industries where it hurts the most – cut the finance pipeline” stressed Tetet Nera Lauron.

Sharing the Manila Initiative adopted at this conference, Tetet Nera Lauron said: “Manila Initiative on Rights of Climate Migrants provides us a framework on how we understand the problem of climate migration, gives guidance and shares analysis on why poor people are forced to migrate and what policy-asks and demands we should be asking our governments and other actors.”

MANILA INITIATIVE ON THE RIGHTS OF CLIMATE MIGRANTS

This Manila Initiative underlines: “displacement is the pinnacle of the worst impacts of climate change. Forced migration in the face of ecological violence is a last resort for many people. Millions of people daily, most notably those living in the Global South, leave their homes because of a lack of choice in terms of economic and environmental survival. By 2050 the UN estimates that up to one billion people will have been displaced because of environmental factors.

The climate crisis is the culmination of centuries of resource plunder and environmental destruction of the Global South by Global North countries. Those who contributed the least (or not at all) to the causes of this crisis are experiencing the worst of its impacts, and, has also exacerbated their exposure to a myriad of structural inequities. They lose access to their lands, food, water and other sources of income and their ability to manage them.”

This Manila Initiative, puts the spotlight on intensified neoliberal globalization which has been driving this climate crisis: “Corporate activities such as large-scale mining, commercial logging, fossil fuel extraction, and agricultural plantation expansion are aggravating the causes of climate change and displacing hundreds of millions of people, primarily the most marginalized sectors of society such as indigenous peoples and rural folks. Thus, the human rights of these communities are continuously being violated, especially their right to a safe and healthy environment. The impetus to act has never been more urgent.”

This Manila Initiative suggests ways in which false market-based solutions propelled by the industry and allies, can be replaced by real fundamental shifts to save our planet:

• “It is high time to reshape our economies and financial infrastructures, regulate the overproduction of commodities, phase out extractivist industries, and heed the call and demands of the people on the frontlines. To address the issue of climate migration, environmental destruction and the climate crisis is to recognize and act on the causes of global inequality, maldevelopment and forced migration;

• Urge governments and intergovernmental agencies to recognize climate change as a key driver of human migration and displacement, and uphold the rights of displaced people;

• Hold historical polluters to account. We urge countries that have benefitted from the unabated burning of fossil fuels for energy to acknowledge their ecological debt by implementing a human rights-based approach to solutions that address climate change and its impacts to human migration;”

“Only through a comprehensive restructuring of society can climate justice be achieved. We must address the root cause of climate change, inequality, and forced displacement” rightly states this potentially game-changing Manila Initiative.