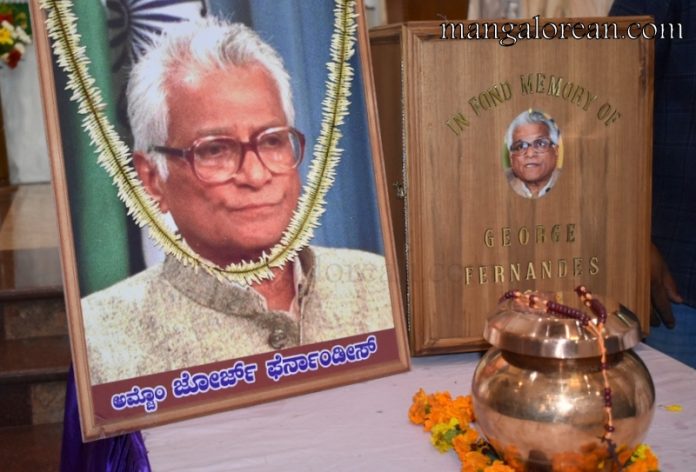 Mangaluru: Hundreds of mourners gathered at St Francis Xavier Church, Bejai, Mangaluru on Saturday, 2 February 2019, where prayers were held in memory of late George Fernandes, former Union minister and a renowned labour leader. After the prayers, George’s ashes were buried at Bejai cemetery. Michael Fernandes, brother of George Fernandes and Felix D’Souza, labour leader in Mumbai, had brought the funeral ashes of George Fernandes from Delhi to Mangaluru by flight on Saturday afternoon, after which the copper vessel containing the ashes were placed in front of the Church altar.

A large number of religious people, among politicians, were MLC Capt Ganesh Karnik, MCC Mayor Bhasker K, MLA Vedavyas Kamath, Former MCC Mayor Sashidhar Shetty, MCC Corporators Lancelot Pinto, BJP leader Yogesh Bhat, among others, relatives and members of the community had joined for this prayer ceremony. Ms Leonal Moras, the first cousin of George Fernandes also joined in the prayer service. Interacting with Team Mangalorean, relatives and companions in Mangaluru and Mumbai of George Fernandes fondly recalled their association with the departed leader and described him as a revolutionary from his childhood days.

Also speaking to Team Mangalorean, brother of George Fernandes, Michael Fernandes said, “My brother Michael always wanted his body to be buried in Bejai cemetery, where his ancestors are also buried. But since he died in Delhi, and was cremated there, we thought of bringing his ashes here to Mangaluru, so that we could have a prayer service, which could be joined by his relatives and friends here in Mangaluru who couldn’t make it for his funeral. Bejai is the birthplace of George Fernandes, and it is appropriate to at least bury his ashes in Bejai church cemetery, and fulfill his dream. After this prayer service, the public will also join for the condolence meet at T V Raman Pai Hall held this evening. It is our aim and duty to show our solidarity with his family and relatives and respect his personality.”

St Francis Xavier Church, Bejai where George was a parishioner

Corporator Lancelot Pinto while praising about George Fernandes contribution made to Mangaluru, he mentioned that he has put forth a proposal to rename Bejai New Road to ‘Late George Fernandes Road’, and that it will be finalized during the forthcoming MCC Council meeting. Michael Fernandes also spoke in Kannada about his brother’s struggle with Alzheimer’s disease, and how he coped with his life bedridden for nearly 9 years. “My brother was a man of Determination, Commitment, Hard Work, Sincerity, Corrupt Free, Dedication, Integrity, a Go-getter and a was a friend of all. I sadly miss him, may his soul rest in peace” added Michael. After the final blessing, the copper pot containing the ashes were placed in the wooden box by Michael, and laid in the pit – and everyone gathered paid their last respect.

Denis Pascal Albuquerque (grandfather of Nigel Albuquerque of MCC Civic Group, Mangaluru), a stalwart teacher of his times in St Aloysius Middle & High School, taught George Fernandes during his formative years. Nigel Albuquerque recalls his grandfather reminiscing young George saying – when the Quit India Movement took off in 1942, George and a few friends arrived at school, shouting Quit India Slogans and ready to pelt stones at the Red Building in protest. Such was the rebel George right from his younger days, growing up in Mangaluru.

It was indeed a great final tribute paid by a large gathering to a man whom they believed was a strong pillar of democracy and a great fighter for democracy and peoples’ rights. Yet another person who recalls his close association with George Fernandes is an advocate and notary J J V Fernandes, also a resident of Bejai, who stays very close to Fernandes’ ancestral house. He recalled the days when they both played together at the latter’s house. “I am seven years younger to Fernandes and I have seen him closely,” J.J.V. Fernandes told media.

P B D’sa, the National Vice President of PUCL had said that Trade Union leader Placi D’mello from Mumbai, who came to Mangaluru for the CPC Logistics strike, took Fernandes with him to Mumbai and gave him the responsibility of addressing issues concerning municipal employees. Fernandes’ revolutionary thoughts did not fit him in a seminary in Bengaluru where he was admitted to become a priest in 1946 after intermediate at St. Aloysius Secondary School in Mangaluru, said P.B. D’sa and J.J.V. Fernandes. As he left the seminary in 1949, Fernandes’ father threw him out of the house and he used to sleep at the Clock Tower near Lady Hill.

Ammembala Balappa, a Socialist by then, introduced Fernandes to Late Nagappa Alva, father of Late Jeevraj Alva, who provided him food and other facilities at that time, P.B. D’sa recalled. This was followed by the first-ever unsuccessful industrial strike in Mangaluru in 1950, following which Fernandes left for Mumbai, P.B. D’sa said. D’Nello nurtured Fernandes as a trade union leader in Mumbai and he became a force to reckon with in the following years, P.B. D’sa and J.J.V. Fernandes said. He stayed committed to the cause of labour, following the principles of Jesus Christ and Mahatma Gandhi. Sources reveal that Fernandes had participated in the Quit India movement as a boy against the British at Court Gudde in Mangaluru. And despite being in Mumbai and Delhi for years, George was very fluent in Kannada, Tulu and Konkani languages.