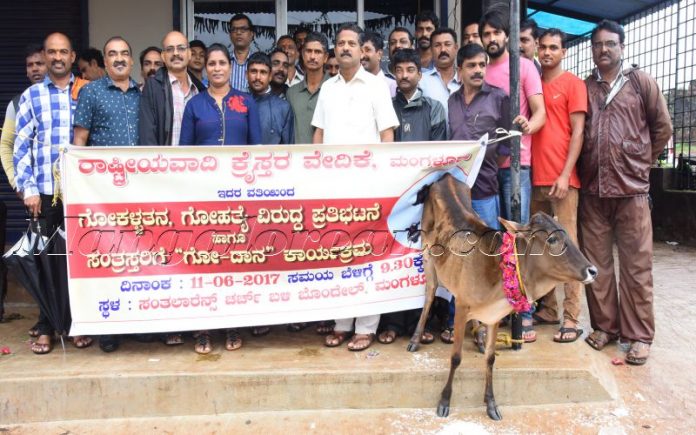 Mangaluru: The Rashtriyavadi Kraistara Vedike staged a protest against the stealing of cows, cow traffickers and demanded justice for those who have lost their cattle, in front of St Lawrence Church Bondel, here on June 11.

Addressing the protesters the BJP Minority Morcha Leader Franklin Monteiro said that cows from the farmer’s houses have been stolen. Farmers are disappointed and are now not interested in rearing cows because of the loss they have suffered from cow traffickers who have stolen their valuable cows. If cows cannot be reared in households there will be a shortage of milk. The Rashtriyavadi Kraistara Vedike demands severe punishment for those stealing cows and a death sentence to those who kill cows.

Franklin further said, “Cows from Frank Fernandes and Lawrence D’Silva’s house were stolen by cow traffickers. Lawrence D’Silva has lost more than 43 cows and Frank Fernandes has lost 3 cows. Christians do not raise their voice even for such illegal activities which is condemnable. For any reason, cows should not be slaughtered. Those who deliver inciting speeches against those protecting cows and those celebrating beef fest in Universities should be severely punished. The government should bring a strict law against the slaughter of cows”.

Franklin also said, “Let they hold Pork fest instead of beef fest? How can one say that beef is their right to food? In the coming days, the Rashtriyavadi Kraistara Vedike will fight against those who steal and slaughter cows”.