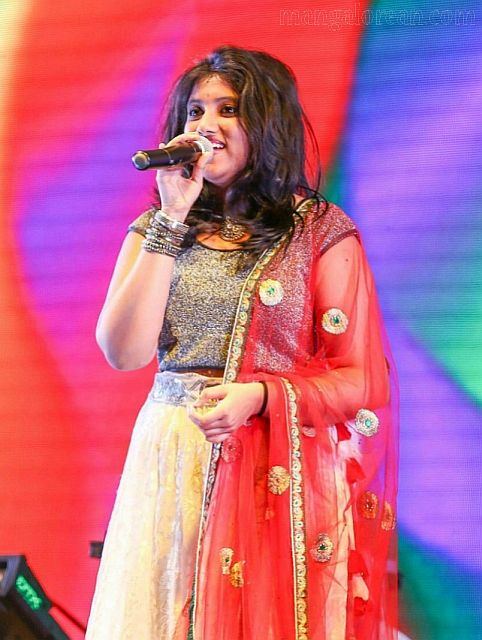 This melodious mix will be unfurled by Spandana, Muscat and will be a fusion of music and melody by the melodious “Zee Kannada Sa Re Ga Ma Pa – Season-11 singers, Sriram Kasar, Sreeraksha Achar and Aishwarya Rangarajan. They have entertained audiences all over Karnataka with their repertoire of Bhava Geethe, Bhakti Geethe, Janapada Geethe and evergreen Film songs in various languages during hundreds of stage shows and on TV channels. Now, they are all set to enthrall Muscat audience on coming Friday. Spandana Muscat has already introduced around 20-25 new faces to Muscat audience in last 5-6 years.

She has participated/won several prizes in various competitions which were graced by music stalwarts like Jesudas, Suresh Wadkar and Pritam Da. She has also had the opportunity of sharing the stage with S.P Balasubramanium, Vani Jairam, Manu, P Susheela, Madhu Balakrishnan, Raman Mahadev. She has been regularly performing live on stage at a very young age and also represented her school in singing programmes including competitions like Jhankar Spectrum and won top accolades.

Sakshi was one of the 8th top contestants of a very popular Zee Kannada TV reality show “Sa Re Ga Ma Pa – Little Champ” in 2015. Currently, she is undergoing training in “Kathak dance” under the able guidance of Jhumpa Chakraborty.

Sumana Shashidhar a well-known name in the music fraternity of Oman is a versatile singer hails from Bengaluru. Under the mentoring of her teachers at various stages of her music career, Sumana has evolved as an accomplished singer in both semi-classical and light music. Sumana is capable of rendering mellifluous numbers fluently in Hindi, Kannada and Telugu. Some of her mentors are Manjula Gururaj, Ustad Khalid Anwar Saheb and Master Ramesh Narayan.

Sumana has released 3 albums and she was blessed by the music legend the most renowned music director Sri Rajan Nagendra sir who released her first album named Srideviyara Bhakthi Sudhe in Bengaluru. Second album Sampradaya Haadugalu based on our customs and traditions was well received by the various cross section of people in Karnataka. The third album Shri Sai Sacharitha on life and teachings of Shri Shirdi Sai Baba and Sumana was accompanied by popular singers from Kannada cine industry L N Shastry and Hemanth.

Sumana has shared the stage with well-known playback singers like Madhu Balakrishnan, L N Shastry, Hemanth and Raman Mahadevan. Sumana is a passionate singer with a firm belief that music is divine and she says with most humility that the voice conferred by God should be used in enthralling the music lovers and for that matter everyone. This is indeed a good service as music unites everyone without any barrier of language or caste.

Looking forward to hear the enthralling voice of see Stars of muscat and Sa re ga ma finalists performing on 7 April . Thank you Spandana Muscat ,

Thank you so much Mangalorean.com team for uploading the article. In Spandana’s small attempt to promote music and budding musicians you have been a helping hand to Spandana Muscat for all these years. Yeh Shaam Mastani is Spandana’s 5th event. Earlier we presented “Sangeeta Lahari” in 2011 with Raveendra Prabhu and Anitha D’Souza duo team, “Yaado Ki Baarat” in 2012 with Tagore Das, Naveen Koppa and Sangeeta Balachandra, In 2013 we organized “Raag Anuraag” and in 2015 we unfurled “Shaam E Sargam” with Naveen Koppa and Prarthana Choudhury team. All these events could be possible with the blessings and support… Read more »