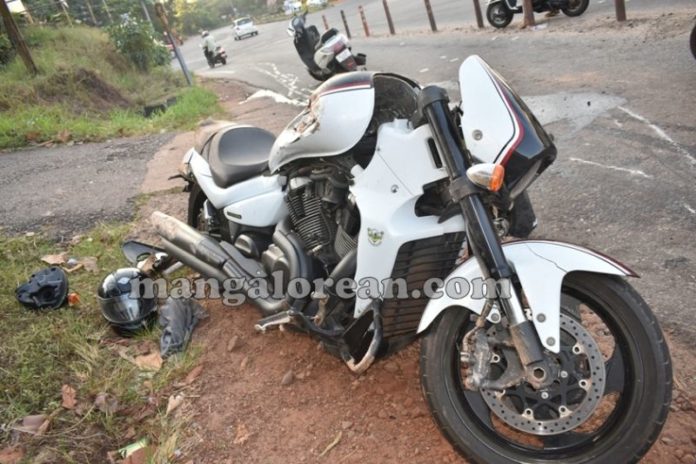 Speed Thrills but Kills! Most of City Two-Wheeler Riders are Careless and Reckless?

Mangaluru: Speed Thrills but Kills! – Yes. But not many two-wheeler riders in the city think of that. They don’t care for their lives, nor do they care for others lives. Just look at the headlines news every day in the media- too many two-wheeler accidents resulting in severe injuries or deaths. But this hasn’t stopped many two-wheeler maniac riders from riding rash, recklessly and carelessly. Everyone wants to be cool, everyone wants to be hot. Everyone knows that bikers are both, for reasons that I have discussed in this article. So just like everyone becomes a “nerd” nowadays, just by installing a crappy custom ROM on their fancy smartphone, everyone becomes a “biker” just by swinging a leg over anything with two wheels. I too ride a two-wheeler, but I don’t ride my two-wheeler like some of these maniacs-that’s ridiculous! 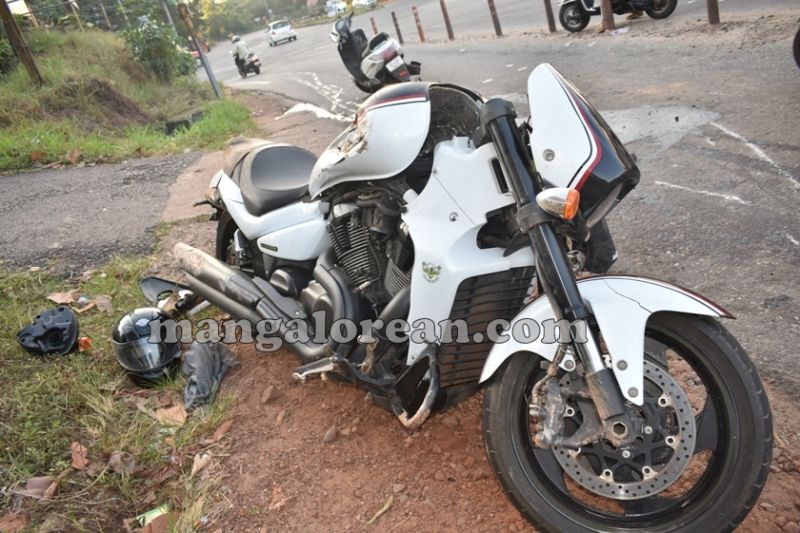 Regarding this accident which happened early this morning, it is learnt that the speeding biker was coming from Padua side and making a turn near Nanthoor Circle, going towards Bikkarnakatta/Kulshekar. But unfortunately, well before the turn, the bike skid and the consequences were terrible- the photos will explain. But luckily it is nice to note that no severe injuries were incurred in this accident, even though the bike is totally mangled. But the funny part is that when Team Mangalorean went to Kadri East Police Station at 9:00 am to get the details, none of the cops at the station was aware of the incident. Then Team Mangalorean inquired a police inspector stationed at Nanthoor Circle at around 10:00 am, and this inspector didn’t even know that a bike was lying on the ground just a few metres away from where he was standing. But finally, Team Mangalorean got a few details, that the bike accident was due to skid, and the biker is admitted to a private clinic in the City- and this news was given to us at 2:00 pm. Just imagine how dedicated and concerned are our Traffic Cops? 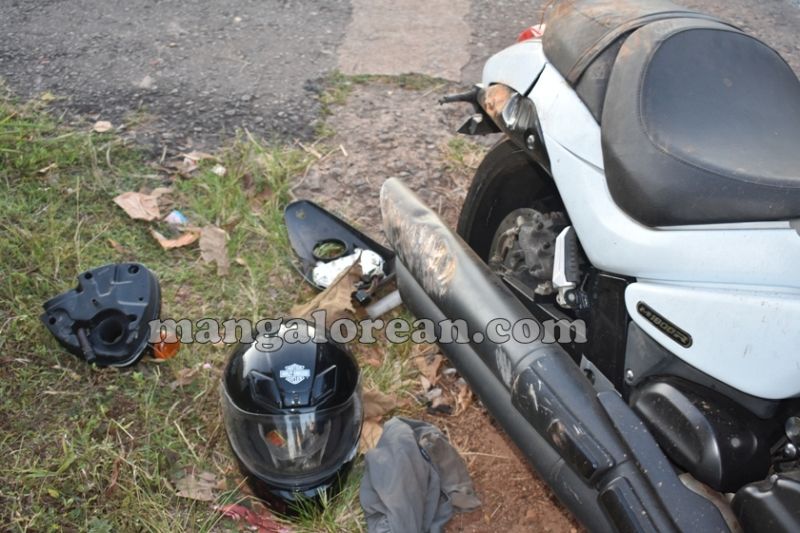 For any two-wheeler accident that takes place, majority of them are at due to riders fault, either over-speeding, recklessly over-taking, disobeying traffic rules like entering a no entry, riding on the footpath, over-running stop signal lights, riding without a helmet etc. Folks, I’ve got some news for you. Being a biker isn’t about just riding a bike! Hard to believe, isn’t it? But it is true. So when you think you are an ultra-macho, Batman vs. Superman cool biker, revving hard on your Unicorn and urging anyone and everyone to race, you are really nothing but an idiot. So hold on to your ‘horses’ as I give you few reasons why you are NOT a biker, at least not a real one. 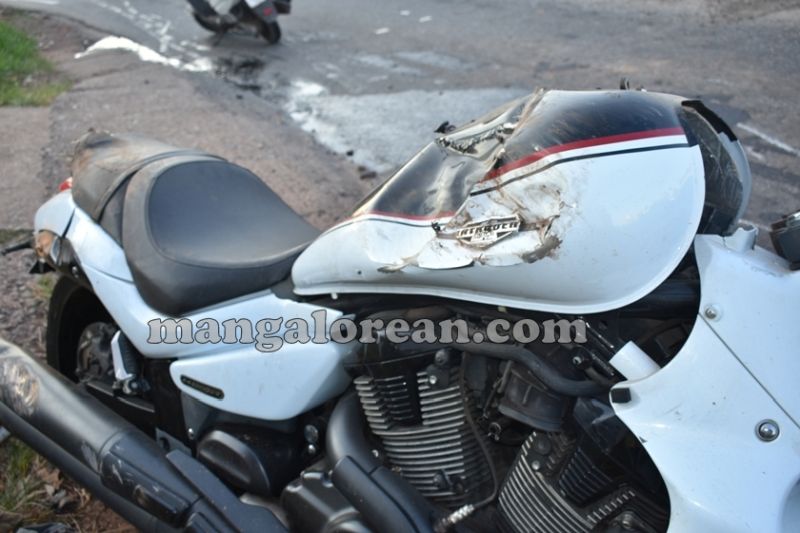 During the weekend I was riding my two-wheeler under extreme heat and dusty conditions on Kankanady Pumpwell towards Nanthoor highway road- the two-lane highway suddenly gave way to a one-lane crowded road, so I slowed down considerably. And then, from nowhere- Our show-off “real” bikers entered the picture. Two teenagers, on a Yamaha bike, overtook me from the left side, very close and at very high-speed. None of them were wearing any gear, not even a helmet. The pillion was urging the driver to race me, and the stupid guy with his hands on the handlebars was trying his best to.

They would overtake me like two idiots on a bike, and then slow down, let me pass, only to overtake me again like two circus jokers on a bike. At some points on that stretch of the highway, they were just acting insane, swinging from side to side, overtaking vehicles like idiots. I really wanted to reach to their side, kick the driver in the groin, slap the pillion on his stupid face, push a metal rod in the front tire and watch their faces grate on the asphalt. But luckily they went left on a side-road somewhere, and the way the rider was speeding in a zig zag manner, I assume he might have landed in a ditch or fallen under a heavy vehicle? 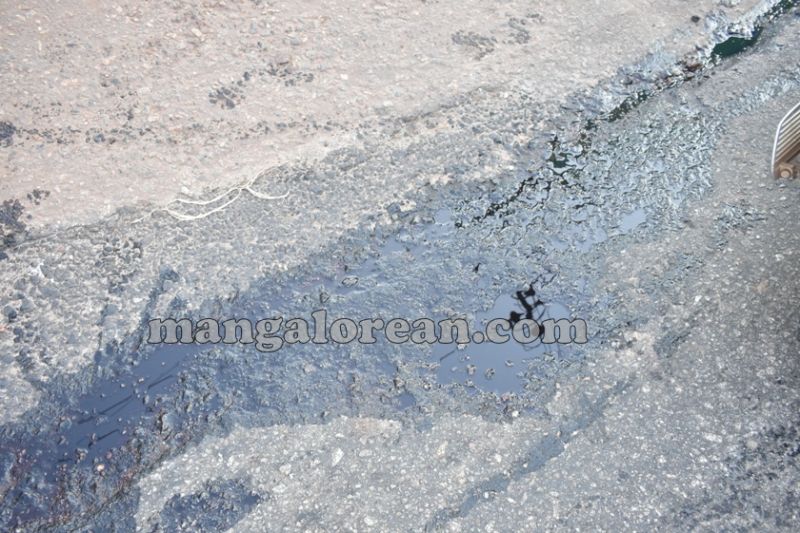 I bet you a 1000 bucks, these guys went to their friends and told huge tales of their bravery and valor. That how a innocent guy on a light-vehicle Suzuki Swish 125 scooter and colorful clothes was beaten in a race by them. I have also seen such boy-racers come to a real race track and literally pee themselves scared. If you race people on public roads, you are a despicable burden on this planet and should be nailed to the extent by the law enforcement personnel.

You keep your helmet on the mirror, or your arm, or anywhere except your stupid little head :

These guys are a special kind of stupid, aren’t they? They somehow find the time in their busy schedule of doing nothing, and buy a shitty little 200 buck helmet. Oh but they are too busy to actually put it on when they are riding! So they leave it lying somewhere on the bike, only to put it on when they see a cop in the distance. Many a times even cops don’t wear helmets, and that is just shameful on so many levels. 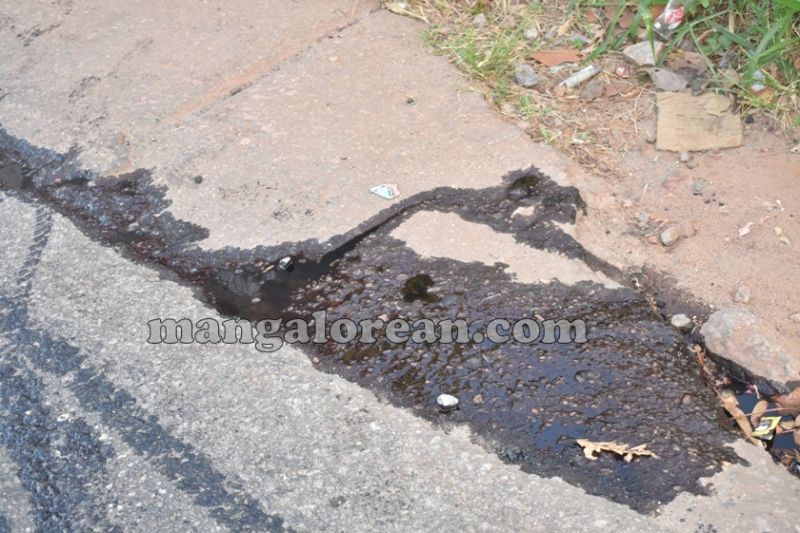 These Einsteins mostly ride a bike only to show-off, and that purpose is entirely defeated if they are wearing a helmet, since girls can’t see their deformed faces and get flattered where they stand. To add more spice to the dish, they wear brightly colored headphones, talk while they ride and listen to Rap or Bollywood numbers when not talking. There’s a reason why wearing a helmet is mandated by law, and the reason is that no one would like little pieces of your brain to mess up their paint jobs. I personally don’t give a damn about you not wearing a helmet, hitting a wall and splitting open down center. What I do give care about is your blood stains on my scooter, and your post-mortem report and news that I have to publish. 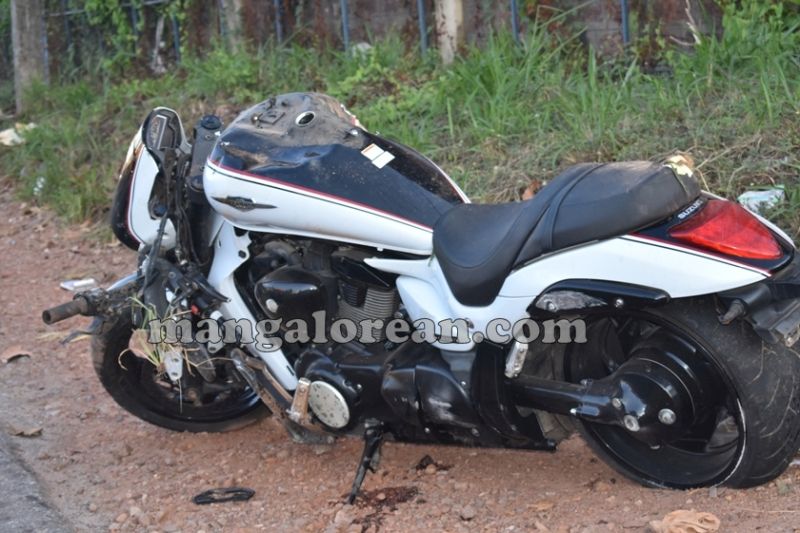 You use a mobile phone while riding :

OMG, why did you ever create these idiots? If you ever thought using a phone while riding is dangerous, welcome to Kudla! On so many different occasions, in so many different cities/states, on so many different bikes I have seen these pathetic excuses for people, talking and even texting while on the move. Whenever I see this travesty occurring, all I want to do is ride close to them, snatch their phone and smash it in their face. Riding a bike is inherently dangerous, because Physics is a bitch. On top of that you decide to send a stupid joke to your two-timing girlfriend with one hand on the phone and one on the throttle.

Again, I don’t care if you drop your few thousands buck phone and I run it over, I don’t care if you lose control, fall into a side ditch. What I do care about is you dangling side to side, not able to control the bike with one hand, while adjusting your phone with the other, and scratching my tank or tearing my jeans. So keep your phone in your pocket, your hands on the handlebar, and your blood inside your body. 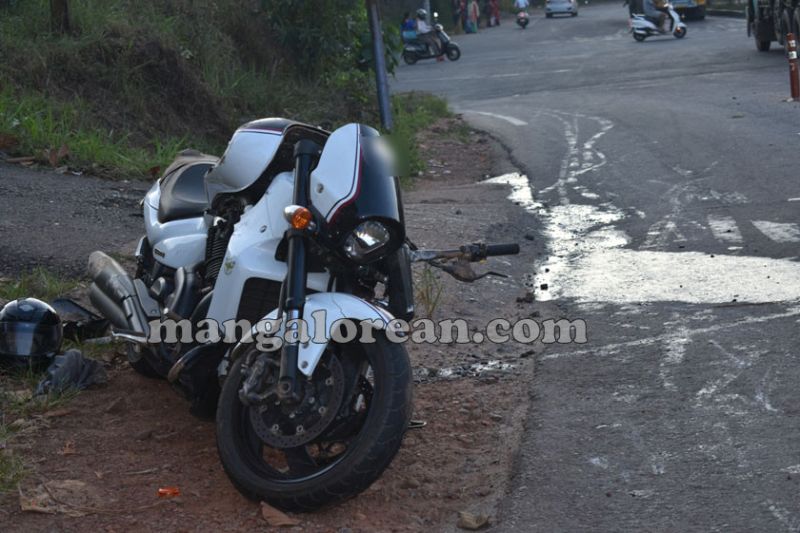 You ride on the wrong side of the road :

This traffic hazard becomes most apparent while riding through crowded Mangaluru. You might be confused into thinking you have suddenly entered America, as hordes of bikers will be riding on the wrong side of the road, that too with such confidence and conviction that you can do nothing more than stop in your tracks and admire them. But then you take a look at the other side, there are cows roaming around, stray dogs on the road, a general desi feeling and you realize you are still in India. What the heck then? You keep your eyes open, try to see if there is some roadblock, some accident, some biblical catastrophe. None! Then why are these people breaking all rules of the road and common sense to do this stupidity? 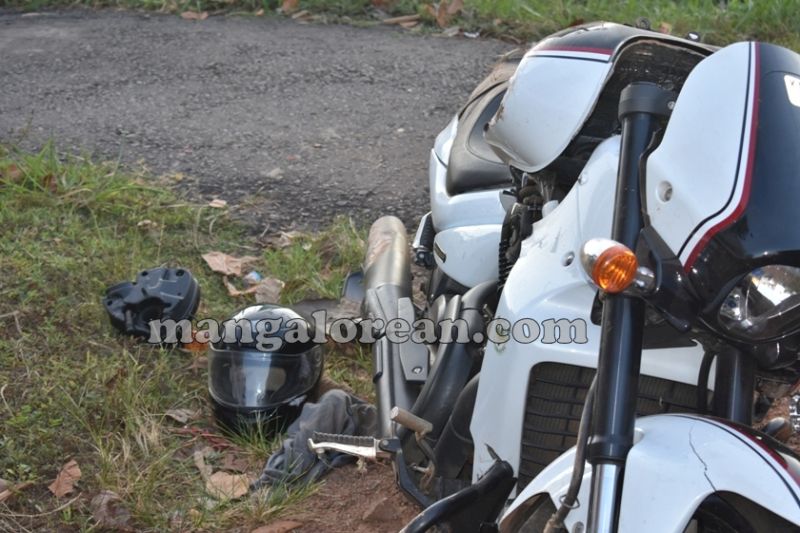 Turns out the next U-turn spot on the road was about 50 meters away, and these careless riders can’t be bothered with such huge wastage of their precious time. So they flush all decency down the toilet and march on together on the wrong side. Things become even more insane when these people start following rules while breaking them! Let me explain.

There will be a guy on the wrong side of the road, but he will be on the right side in the wrong side of the road. This means that he will be directly in the path of the fastest lane, dragging his body at 20 kmph, flashing his headlight and honking like a crazy dude. And with the introduction of delivery boys employed by Zomato, Ziggy, Uber Eats and others, life has been hectic for other two-wheeler riders, when these delivery boys zoom by you or come right at you on the wrong side- because they want to deliver the food to the customer in time, and not care about their lives and yours! 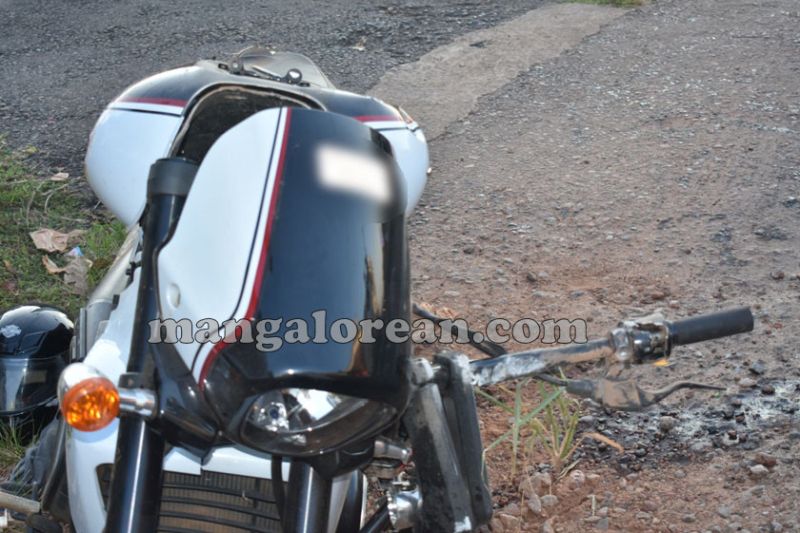 You honk incessantly, ride through crowded streets at high speeds, and have no value for others and their rights :

This is a rather broad category that combines the hormone-fueled compulsions of these alpha-males, who are always in a hurry and give no value to anyone else. Ever been stuck in front of one of these idiots? They will burst open your ear with the constant honking of their pressure horns, will try to overtake you from left, right, up or down, and treat pedestrians like dirt. Excuse me-The road doesn’t belong to your daddy, it is a public asset that you get to borrow for a certain time. While you are on this public asset, be as nice as possible, not as obnoxious as imaginable. This attitude is especially rampant in small towns, where guys with long hair and tight pants do ‘bike stunts’ around the city, eve-teasing little girls and creating general sadness. 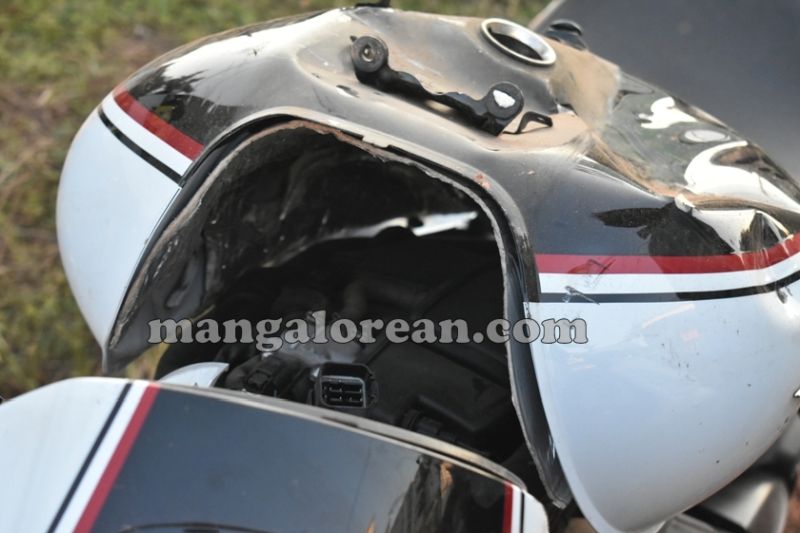 Another type here would be the guys who always ride with their high-beam on at night. I understand that it is a bit difficult for bikers to see after dark, given the propensity of other idiots in trucks, cars and buses to light up the road crazy. Even then you should try your best to stay with low-beams, don’t go and join the merry gang, be the bigger guy.

In conclusion, Riding in Mangaluru is NOT a good experience, mostly. This is because of the above mentioned few types of people, who really ought to be given good training and teaching on road safety and traffic rules. Bad roads are bad, but bad people are worst. So next time you proclaim yourself to be the king of bikers, look inside, look around, and remember – real bikers don’t care about being noticed, or applauded, or worshiped, they ride because they ride.