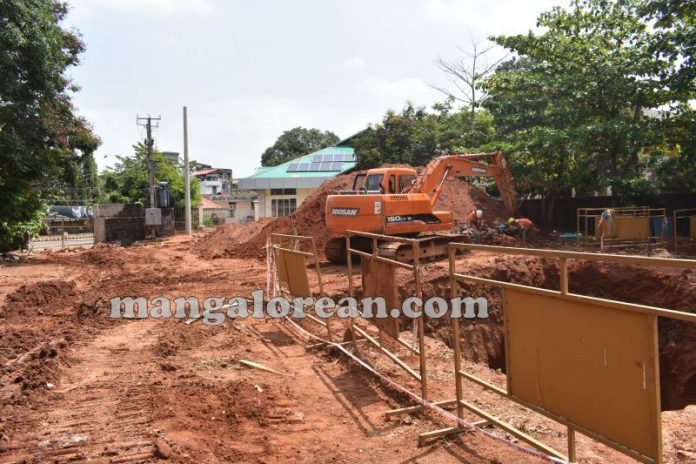 Temporary Central Market to Come Up on 2 Acres Land near Town Hall at Cost of Rs 5.25 Crore

Mangaluru: If everything goes according to the plan, the Central Market with the fish market will be rebuilt under Mangaluru Smart City Limited’s (MSCL) Public-Private Partnership (PPP) model on Design Built Finance Operation Transfer (DBFOT). Defining A Public–Private Partnership (PPP, 3P, or P3)-it is a cooperative arrangement between two or more public and private sectors, typically of a long-term nature. In other words, it involves an arrangement between a unit of government and a business that brings better services or improves the city’s capacity to operate effectively. Because PPPs are a cooperative between government and the private sector, they are an example of multi-stakeholder governance. PPPs are closely related to concepts such as privatization and the contracting out of government services. 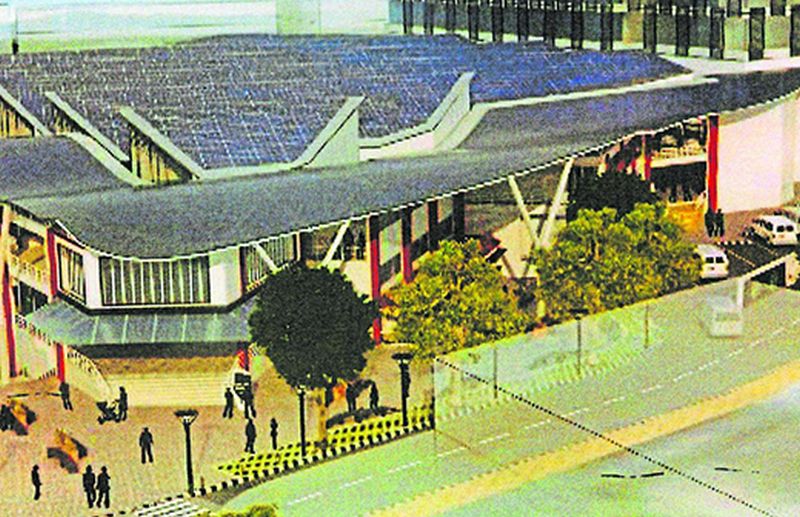 There is no consensus about how to define a PPP. The term can cover hundreds of different types of long-term contracts with a wide range of risk allocations, funding arrangements, and transparency requirements. The advancement of PPPs, as a concept and a practice, is a product of the new public management of the late 20th century and globalization pressures. Despite there being no formal consensus regarding a definition, the term has been defined by major entities. Anyways, a full-fledged market complex at the Central Market area has been a long pending demand of Mangaluru, and the construction will start once the bidder is finalized. 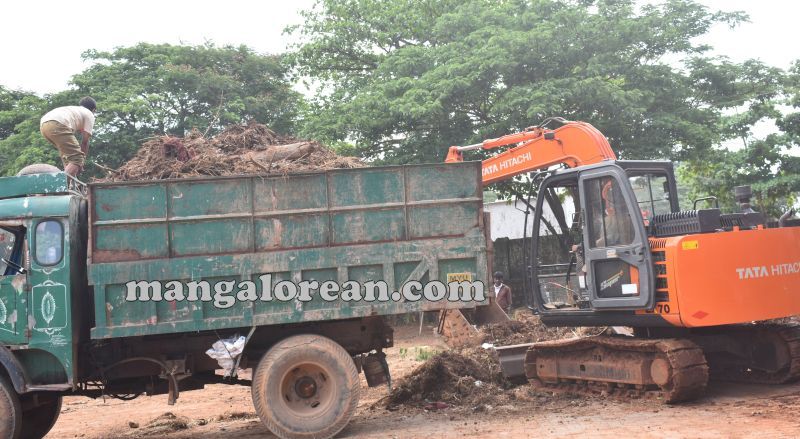 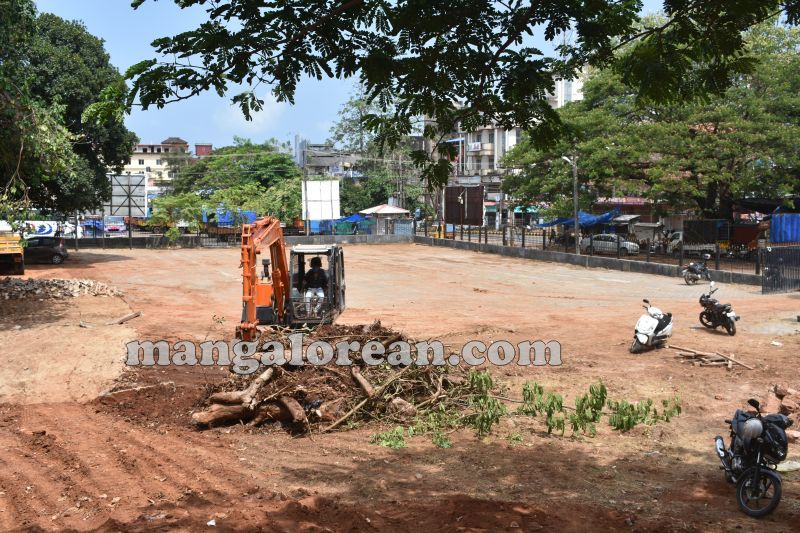 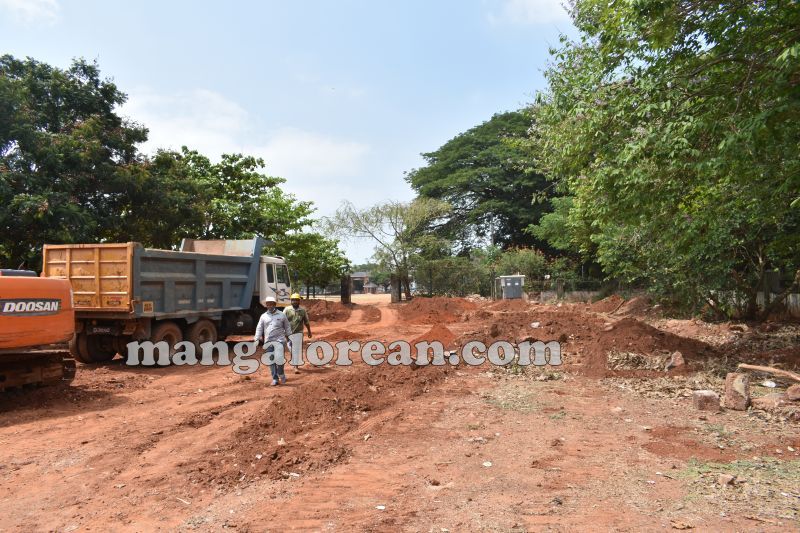 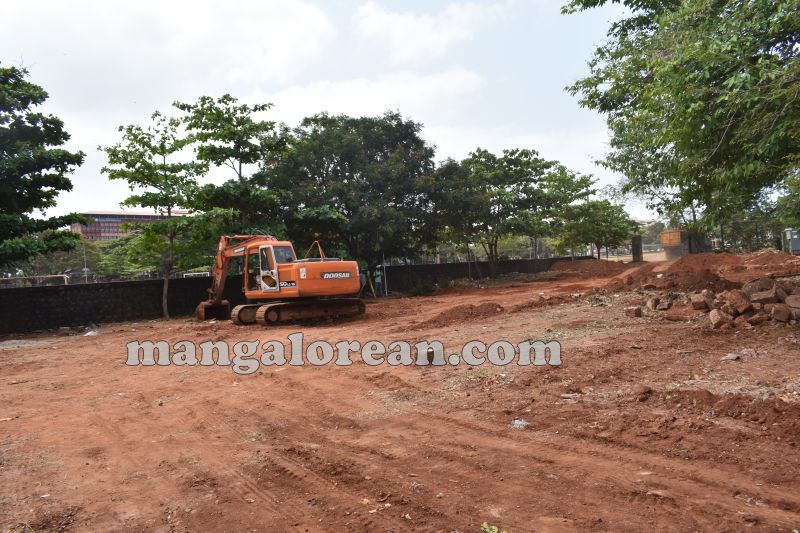 The market will be developed at a total cost of Rs 115 crore. A proposal to demolish the existing old Central Market building and build a new market area was approved at the MSCL board meeting held in October 2018. However, no bidders had come forward to take up the work when the tenders were floated on three previous occasions. It is learnt that two-three bidders had come forward, but they were not approved by MSCL. Though there was a proposal to take up the work on ‘Engineering, Procurement, and Construction’ (EPC) mode, MSCL Board favoured the PPP model. Thus tender with few changes in the conditions was floated for the fourth time. 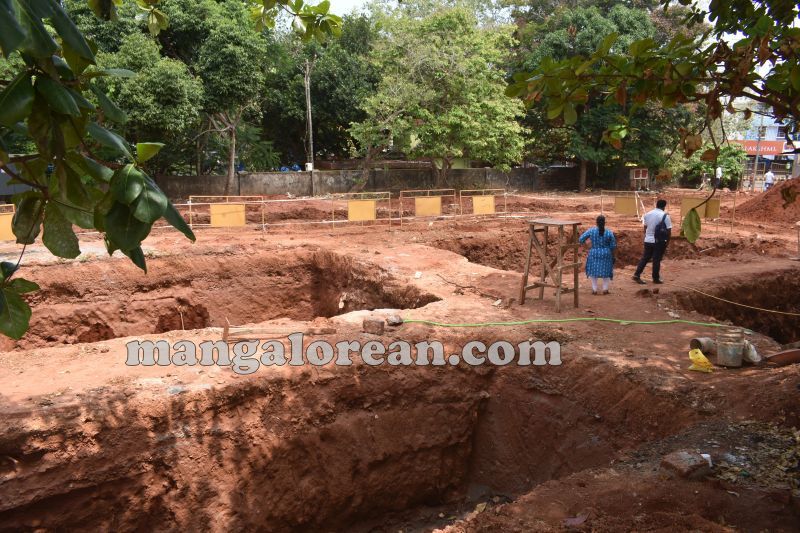 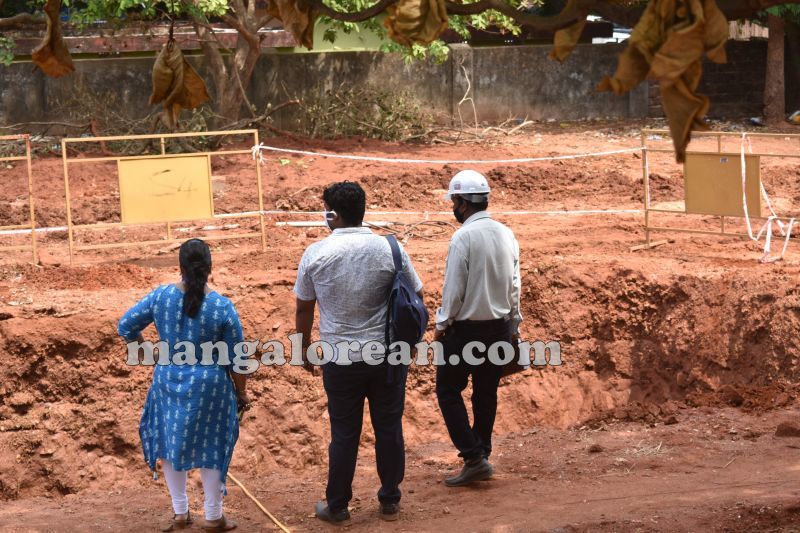 The proposed Central Market complex will have a separate space for the retail sale of vegetables, fruits, flowers, fish and meat. The complex will also have a separate space for commercial establishments and office premises as well. A total amount of Rs 5.25 crore was earmarked to construct a temporary market and rehabilitate vendors from the present Central Market area. Five bids had been accepted and financial bid has been opened for the purpose. The Central Market before shifting to APMC Yard in Baikampady had 597 shops, operating wholesale and retail business. Majority of the activity such as loading and unloading takes place up during the morning wee hours lasting till around 10 am and later in the evening after 7 pm. 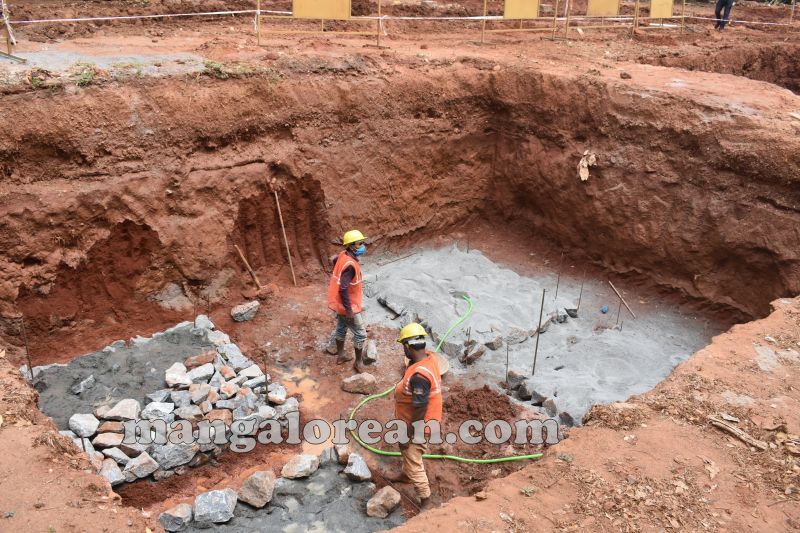 During the recent meeting, MSCL chairman V Ponnuraj had directed the board to have an iconic building designed with high ceilings. At present, the lack of cleanliness and indiscriminate dumping of waste had been posing many inconveniences to customers. The street vendors are also accused of dirtying the Central Market area. When it rains, garbage flows with the water causing inconvenience to sellers and buyers. The parking area for customers was also choked and any available place was encroached by the street vendors. In fact, five main roads join the area where Central Market is situated—from Bunder, Bhavanthi Street, Ganapathi School Road, A R D’Souza Road and Fathima Store Road. As a result, the density of vehicles is high in the area. The toilets in the Central Market building are not in good condition. During rains, the rainwater enters the flower market. But once the new market comes up, all these will be issues of the past. 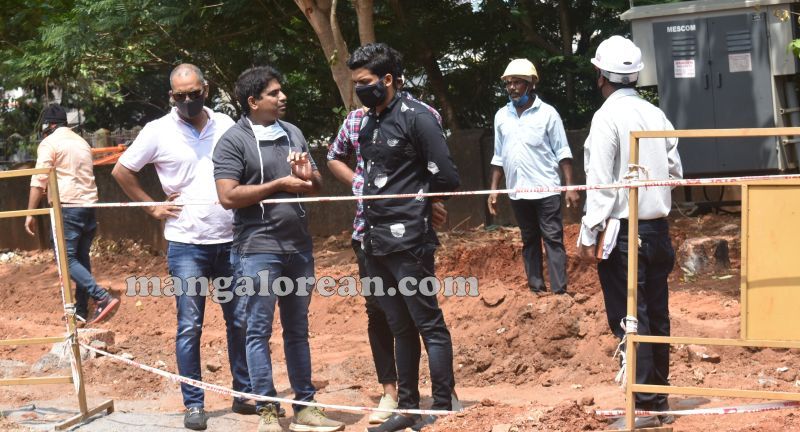 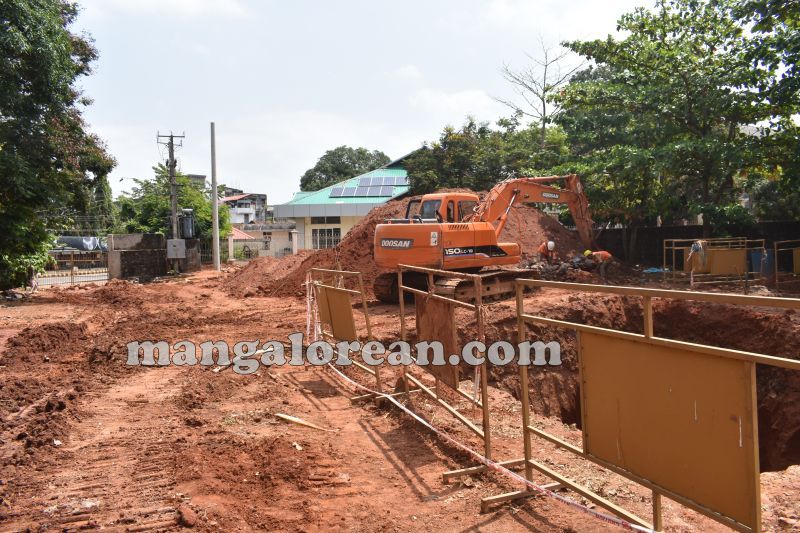 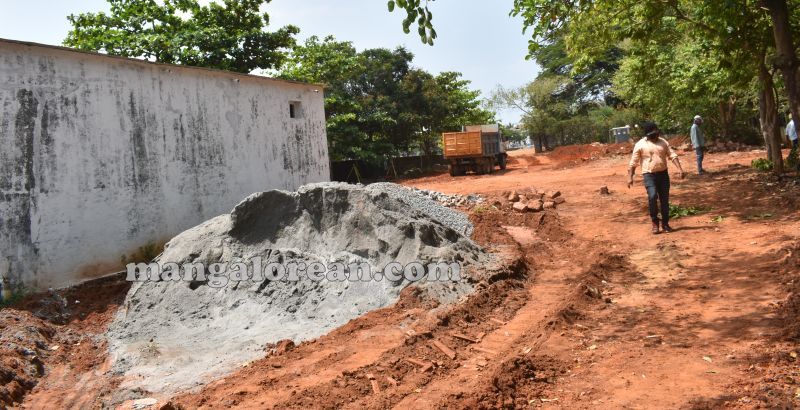 Speaking to Team Mangalorean, Ms Archana Sudesh, the Assistant Engineer in MSCL who was at the construction site of the Temporary Central Market, near tom Town Hall/Indira Canteen and adjacent to Nehru Maidan, said, “The temporary market is being built on a nearly 2 acres land, at a cost of about Rs 5.25 crore. The entire area has been divided into three sections- one part of the land behind Town Hall/adjacent to Football ground will be allotted for 28 Meat shops; then the land ( where MCC had provided a provision for street vendors near State Bank to do their business, but never materialize) which is next to Indira canteen, will be allotted to vegetable and fruit business- where there will be 48 full-fledged shops and 205 stalls”.

“For other 96 shops dealing with miscellaneous items, they will come up right next to Nehru Maidan cricket ground. The entire work of the temporary central market could be completed within four months, depending on the weather etc. Once completed the temporary central market will have 172 full-fledged shops ( 28 meat, 48-veg/fruits, 96 miscellaneous) and 205 fruit/veg small stalls. The temporary market will be exclusively for retailers, while the wholesale operations will remain functioning at APMC yard” added Ms Archana. 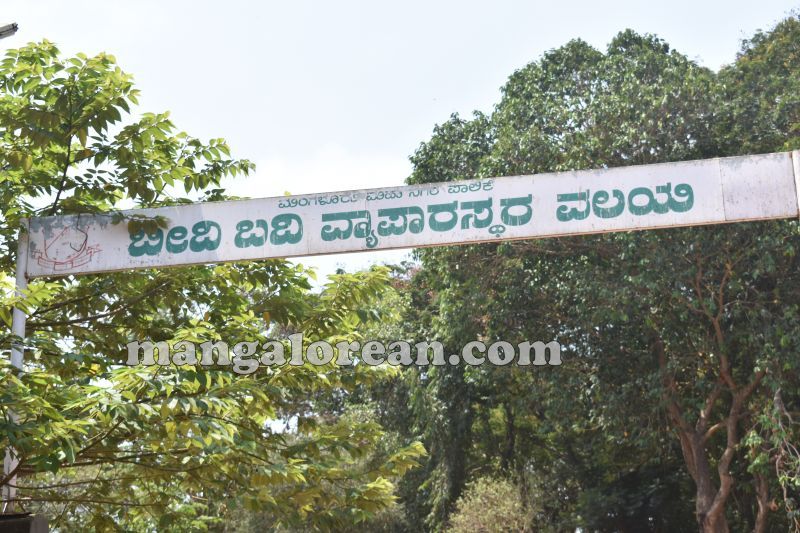 Also speaking to Team Mangalorean Er Arun Prabha-the General Manager MSCL (Technical), who also happens to be my classmate at St Aloysius College, Mangaluru said, “Apart from the right details what Ms Archana provided you, MSCL will try to complete this temporary central market project within the scheduled time, and we have requested S 4 Engineering & construction Co, Mangaluru, who will be undertaking the work, to expedite the work and as per required standards. We will restrict street vendors near the temp market, and we have already evicted the street vendors on the State Bank road stretch. Retailers and Citizens cooperation is required in order to make this temp market function well, until the state-of-the-art new Central Market comes up”.