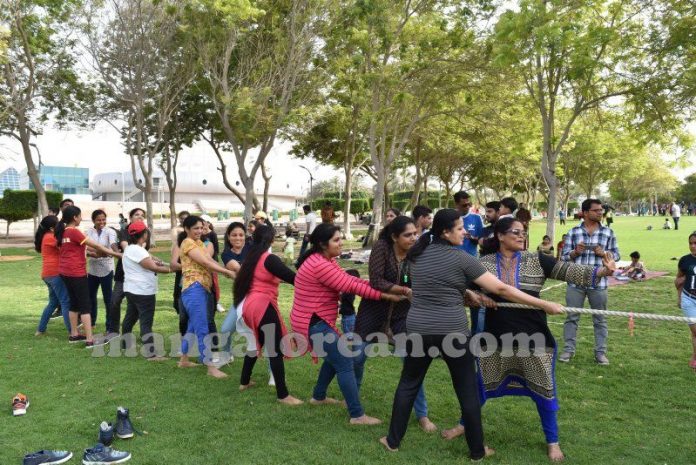 The day-long sports meet began with a welcome speech by Dharmendra Bangera. The first session of the day was the ice-breaker session of laughter Yoga led by Rajesh Pallikere, who combined some laughter exercises with pranayama (breathing exercises) to kick start a good mood and energize all the participants.

All the members including kids and adults participated in the sports meet with great enthusiasm. The first event for children was the running race, where the junior athletes were sprinting across the tracks. Crawling race was the next event which saw all the children crawl in military style.

This was followed by races for adults such as sprint, lemon-n-spoon, book balancing and skipping, which stirred up a lot of excitement. It was very heartwarming to watch, as members of all ages participated enthusiastically in the true spirit of sportsmanship. Couples participated in the three-legged race which was a neck-and-neck competition as all the couples put in good efforts.

The next event Kabaddi injected an element of thrill and enthusiasm where the young players put up a good show of strength and athleticism. Both the teams went all-out into the attack and gave a tough fight to each other. The healthy competition among the participants was evident which made it extremely interesting and captivating for everyone witnessing the game.

The highlight of the day was the Tug of War match between the men and women which was indeed a moment to savor and enjoy.

The raffle draw winners were announced and prizes were given on the spot, viz, Tab (Shekhar Amin), LG sound Bar (Geeta Rajesh), Smartphone (Aashka Karkera). And finally, the Prize Distribution, where all the winners and runners-up were congratulated and awarded with certificates for their achievements in the respective events. The overall rolling trophy was bagged by the winning team of Kabaddi. But regardless of who won, all those who participated were winners!

The event concluded with the vote of thanks delivered by Dharmendra Bangera.