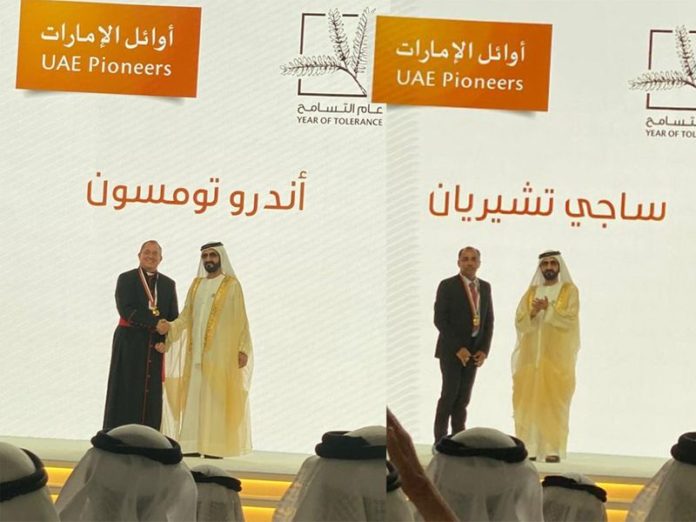 Indian businessman Saji Cheriyan had grabbed the headlines when he built a mosque in Fujairah for worshippers in 2018. An orthodox Christian from Kerala, Cheriyan was lauded for his humanitarians values and compassion when he constructed the Mariam Umm Eisa (Mary, the Mother of Jesus) mosque in Al-Hail Industrial Area and dedicated it to thousands of Muslim workers, who had to walk a long way to pray.

But his biggest moment came when he received the UAE Pioneers Award on Tuesday from His Highness Sheikh Mohammed Bin Rashid Al Maktoum, Vice-President and Prime Minister of the UAE and Ruler of Dubai.

“I did not even imaine that a small gesture I did would be recognized by this country. As an Indian who have been living in this country for the last 15 years, this definitely is my proudest moment.”

Cheriyan’s wife Elsy Saji was also present when he received the award in Abu Dhabi. The ocuple has two grown up sons – Sachin and Elwin.

“It was an august function. There were rulers from all emirates present. I had goosebumps when Sheikh Mohammed spoke to me. He asked me why as a Christian I built the mosque. He also asked about the Iftar distribution I did for 28,000 people,” said an elated Cheriyan.

“I have no words to thank this country. We all live here, make money and go back to our own country. But I think it is our responsibility to give back to this country. I am inspired by this award to do more for the UAE that has been my home for the last 15 years,” said Cheriyan.