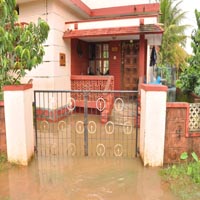 Udupi: Heavy rain continued in several parts of the district for the second consecutive day on Friday, July 10. Low-lying areas in the city were inundated.

Heavy rains resulted in a flood-like situation in low-lying areas. Water also entered several houses in Kundapur and Udupi Taluk. An open well belonging to Gopal Ganiga was damaged in Bijadi Koteshwar. As many as 25 houses have been flooded in Bannaje, Alevooru, Kalsanka, Matapadi and Padukere areas.

The rain water had entered Nagabana premises in Bannaje. Artificial floods were witnessed in Bannaje, Ambalpadi, Kalsanka and other parts of Udupi City. Owing to incomplete service roads due to the widening of the National Highway, rain water has accumulated on the roads.

According to the Taluk office report, a nine year old girl, Vismaya, was washed away in the river Chakra, Kundapur on Friday. She was crossing the river when she lost balance and fell into it.