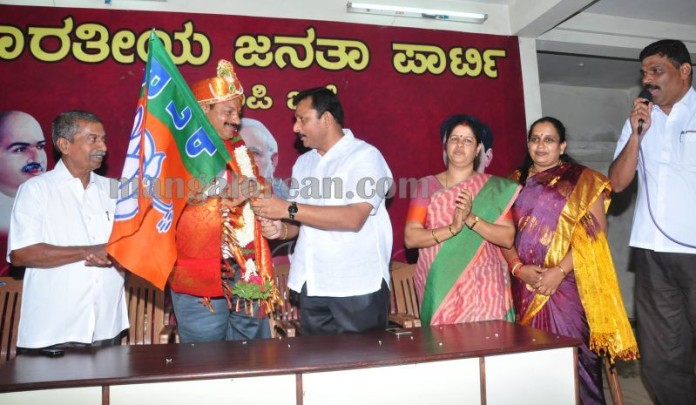 Udupi: “We will work effectively towards leading BJP to victory in the 2018 assembly polls,” said Mattaru Rathnakar Hegde, the newly elected district BJP president. He was speaking at a press meet held at the BJP office, Kadiyali after taking charge as the district BJP president, here on June 13.

An effective organization is essential to drive the party towards victory. Past president Tingale Vikaramarjun Hegde has worked towards organizing the party and his organizational skills will be utilized. The party has witnessed tremendous support from the people of Udupi which is an essential guiding factor to win 5 assembly seats of the Udupi district, he added.

Tingale Vikaramarjun Hegde handing over the charge to Mattaru Rathnakar Hegde said that Udupi district has always remained the BJP’s strong fort. The mission 150 seats in 2018 assembly elections have to be effectively mentored. State president B S Yeddyurappa will be making his maiden visit to the district after assuming the post of State president, prominent leaders of BJP who have distanced themselves the from party affairs will join BJP during B S Yeddyurappa’s visit, he added.