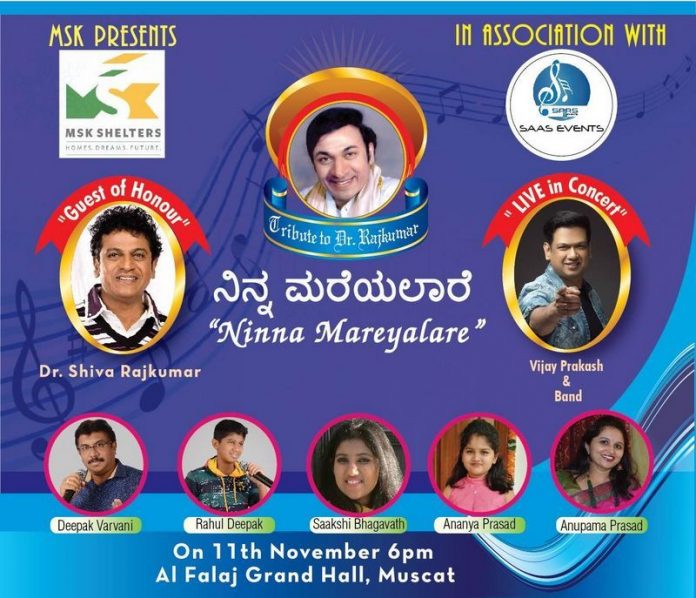 Oman: MSK Shelters in collaboration with SAAS Events are all set to present “Ninna Mareyalare” a live-in-concert by Vijay Prakash and team in celebration of the 61st Karnataka Rajyotsava on Saturday, 11th November 2017 at the Grand Hall of Hotel Al Falaj, Muscat. Singing along with him will be some of the extremely talented local singers, viz. Sakshi Bhagawath (Zee Kannada SaReGaMaPa fame), Deepak Varvani, Anupama Prasad, Rahul Deepak and Ananya Prasad.

VIJAY PRAKASH, whose very name is synonymous with versatility, is one of the most well-known singers and performers par excellence possessing one of the best vocal chords in India. Vijayprakash needs no introduction. He has sung a wide spectrum of songs in almost all Indian languages and is currently one of the leading singers in India and certainly the most sought-after singing star in the Kannada movie industry. Vijay Prakash will be performing to the highly appreciative Muscat audience with his own six piece live orchestra to mesmerize the Kannada music lovers with his powerful yet soft timbered magical voice.

VP is one of the singers who is credited for the evergreen Hindi song “Jai Ho” which won the 2008 Academy Award for Best Original Song and the 52nd Grammy Award for best song written for a motion picture. He is also the recipient of numerous awards including the film fare best male playback singer award.

This one of a kind musical event is being presented as a grand tribute to Padmabhushan Late Dr. Rajkumar, an immortal icon, a screen legend of Kannada film industry, who is popularly known as Annavaru, Dr. Raj Kumar was a highly revered personality not only for his ever-popular films but also for his highly esteemed disciplined life professionally and personally. Dr Rajkumar was the recipient of “Padmabhushan”, the third highest civilian award in the Republic of India and also the prestigious Dada Saheb Phalke Award and KannandaRatna Award among numerous other awards and titles in his lifetime.

To add more glamour “Ninna Mareyalare” event will be graced by none other than Dr. Rajkumar’s eldest son Dr Shivrajkumar as a Guest of Honour. DrShivrajkumar is a household name in Karnataka and is one of the most popular stars of the Kannada movie industry known for his intense performances and a wide range of roles. This charismatic and evergreen star made his movie debut in 1986 and is still going strong even after three decades in the cine field which bears testimony of his immense popularity and talent. He is affectionately known as the “HAT-TRICK HERO” in his fans circle. His illustrious career in Kannada film industry spanning over three decades has given over 100 movies. The most notable being Anand, Ratha Sapthami, Mane MecchidaHuduga, OM, Janumada Jodi, Killing Veerappan, Shivalinga among many more which have created milestones and box office records. He has also been conferred with honorary Doctorate from the Vijayanagara Sri Krishnadevaraya University. He is the recipient of four Filmfare and four State Awards as Hero in the best film category.

This much awaited mega musical event “NinnaMareyalare” has been conceived and conceptualized by the trio, a group of an ardent and passionate music lovers namely Vani Bhagavath, SDT Prasad and Deepak Varvani. The organizers have assured that it would be a breathtaking visual & vocal manifestation which will mesmerize the Muscat music lovers transporting them to a different era.