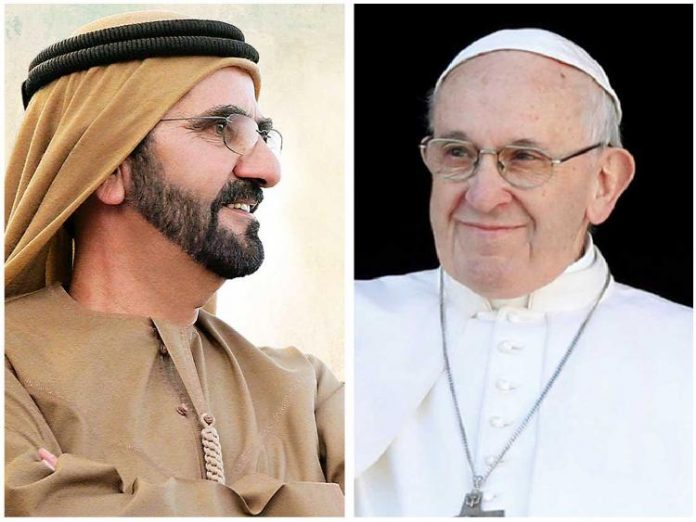 We are bound by our humanity: Shaikh Mohammad on Pope’s visit

Dubai: His Highness Shaikh Mohammad Bin Rashid Al Maktoum, Vice-President and Prime Minister of the UAE and Ruler of Dubai, has welcomed the visit to the United Arab Emirates by Pope Francis, Head of the Catholic Church, beginning Sunday.

In a statement issued on the eve of the Pope’s visit on Saturday, Shaikh Mohammad said: “We welcome the visit of Pope Francis, Head of the Catholic Church, to the UAE. We, as UAE leadership and people, are looking forward to this historic visit that will contribute to underpinning the values of tolerance, peaceful co-existence, and cultural exchange,” said Shaikh Mohammad BRashid in a statement marking the occasion.

“Over five decades since its establishment, the UAE has been promoting the values of tolerance, acceptance.”

“The UAE receives Pope Francis at a time when we are in dire need of meeting on common human values, extending bridges of brotherhood and friendship, highlighting the points of similarity, uprooting factors of separation, defusing and fighting strife, hatred and religious and ethnic discrimination.”

“On this occasion, I thank my brother His Highness Shaikh Mohammad Bin Zayed Al Nahyan, Abu Dhabi Crown Prince and Deputy Supreme Commander of the UAE Armed Forces, for inviting His Holiness to the UAE, the home of love and peace, to participate in the ‘Global Religions Dialogue Forum on Human Brotherhood’ in the presence of elite leaders and representatives of religions and faiths in the world,” he further stated.

This reflects the UAE’s status as a global capital for coexistence, tolerance, fraternity and interfaith dialogue, which is not a new thing to the UAE, but has been founded and deeply-rooted in the UAE values by the founding father, the late Shaikh Zayed Bin Sultan Al Nahyan, and are being promoted by President His Highness Shaikh Khalifa Bin Zayed Al Nahyan, Shaikh Mohammad stated.

“The UAE today is a home for people representing the world’s nations and are living in a harmonious human unity.”

“In this respect, we also welcome Dr. Ahmad Al Tayeb, Grand Imam of Al Azhar, who will be meeting the Pope in Abu Dhabi to deepen and strengthen the ties of human brotherhood, and emphasize the important role of religious clerics and scholars to spread peace and love everywhere,” Shaikh Mohammad concluded.

Humanity and brotherhood supersedes religion here. Good for a peaceful co-existence and spreading of love and care. Good move by the Sheikhs of UAE and Papa Francisco.

This is indeed a historic event for the Christians and the Moslems of the world. The spirit of “Internationalism” that has always been practiced by the Citizens of U.A.E. has now come into reality. The visit of His Holiness, Pope Francis to U.A.E. has paved the way for a new era of justice and equality amongst all the religions of the world, particularly the Christians as well as the Moslems. The leaders of U.A.E. have brought a new awareness to the people of the region that we are all children of one God, and we all can live in peace… Read more »