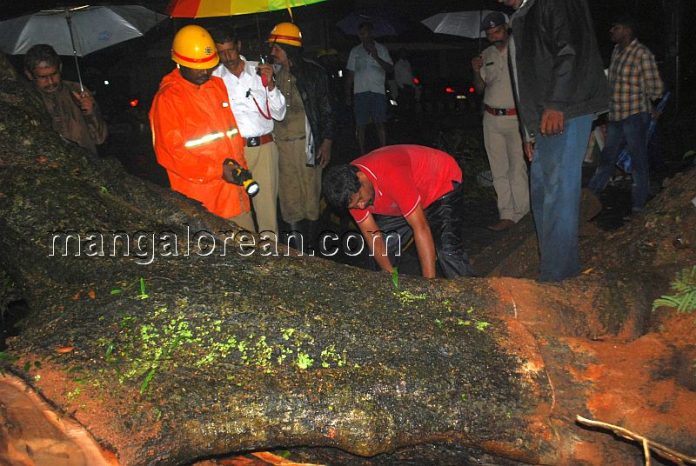 Where Are the Environmentalists/Forest Officials When Old Trees Come Crashing Down?

Mangaluru: In spite of falling tree branches and also trees getting uprooted and causing heavy damage to buildings, property, vehicles, and also injuring commuters, the district authorities/MCC Officials/Forest Department Authorities have not taken any action in trimming branches or chopping down old hazardous trees. In the past few days, after the city was lashed with torrential rains, with gusty winds, there have been quite a few incidents of trees being uprooted or branches landing on building/homes.vehicles and people. While Environmentalists and Forest Department Officials are quick enough to be at the spot to stop trimming or cutting hazardous trees, but when these trees come crashing down on vehicles, houses, walls etc, during that them you’ll not find any of the environmental activists nor forest dept officials. Why? I guess they are guilty!

Once again after Mangaluru had seen quite a few fallen trees creating huge losses to property, last evening at around 6 pm or so, a huge dilapidated old tree got uprooted in front of Canara School-Urwa, near Mangala Stadium and crashed in the middle of the road, thereby blocking the movement of traffic in that area. The first to arrive at the scene were the fire brigade personnel, followed by the police after a while. Luckily this accident didn’t hurt or create any damage to property- and also that the incident happened after school closing time, so the students were also lucky to escape from getting hurt. Also lucky was a street vendor lady, who always does her business near the bottom of this tree, but yesterday she had set up her place on the footpath- thus she also escaped a tragedy.

Speaking to Team Mangalorean she said, “God only saved my life today. I always do my business very next to the bottom of this fateful tree, but for some reason, I had decided to move my sales on the footpath- and my decision saved my life. Many citizens had warned me about the bad condition of this tree and that I should be careful, and many had also complained to the concerned authorities to fell the branches or chop down this old tree. But seems like no took action, and now we have this disaster”.

So coming to the point, lately while scores of old trees have been falling all over the city following strong gales, resulting in damages to vehicles and property, why hasn’t the concerned authorities taken any precautionary measures. Most of the trees had no room for their roots to spread out and this led to gradual decay. In other cases, growing trees had their branches cut regularly on one side because they leaned on to private property; the trees grew up lopsided and leaned far on to the roads. This means their remaining branches too were regularly being trimmed and they lost strength. The concerned authorities are expected to monitor a city-wide “tree census” to determine how many trees are really a danger to traffic or at risk of falling down during heavy rain and strong winds. Trees which are unable to bear the air pollution and decaying should also be identified. But seems like no one is doing their job right- and as a result, we have trees come crashing down on vehicles etc now and then.

A few officials from MCC say that when they are ready to trim or cut down old and hazardous trees, they are usually stopped by environment activists or Forest dept officials- so they are in a fix. On the other hand, the problem with our MCC authorities is that they wait till the trees fall, and then only take action–like many trees had fallen due to rains recently. The safety of pedestrians and of all road users should be the first and most important priority for National Highway authorities and also local authorities and also for a State body that has the responsibility in this area. Some of these trees may have a disease, which is a clear indication of root rot. Through this report, Team Mangalorean is asking as a matter of urgency with the concerned people at MCC and Forest department that old and hazardous trees are inspected and that those that appear in any way dubious should be promptly removed before they crash down resulting in injuries or death to motorists or pedestrians.