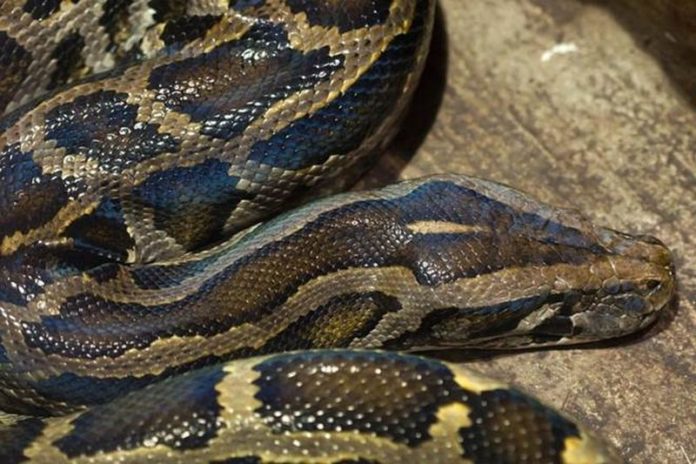 Mangaluru: The common name “Snake Gourd” refers to the narrow, twisted, elongated fruit, and a soft-skinned immature fruit which is popularly used in the Mangalorean and cuisines of South Asia and Southeast Asia. With some cultivars, the immature fruit has an unpleasant odor and a slightly bitter taste, both of which disappear in cooking. The fruit becomes too bitter to eat as it reaches maturity, and the shoots, tendrils, and leaves are also eaten as greens. And regarding, Python, it is a genus of constricting snakes in the Pythonidae family native to the tropics and subtropics of the Eastern Hemisphere. And a Python can swallow a whole animal or a human being. Python skin is used to make clothing, such as vests, belts, boots, and shoes, or fashion accessories such as handbags. And the best part is that you can find, the ‘PYTHON’ and the ‘SNAKE GOURD’ at the Central Market operating at Agricultural Produce Market Committee (APMC) Yard in Baikampady.

That was the beginning of this report on a lighter side of the vein. Finally, a nearly 80 acres of Agricultural Produce Market Committee (APMC) Yard launched nearly twenty years ago at Baikampady, in the outskirts of the City, has been put into use, after Mangaluru City Corporation forcibly shifted the existing Central Market on Market Road in the City, to this new location. Even though the merchants were not eager to shift from the heart of the City to a place far from the City, but had no other option when MCC had instructed them to do so. The decision to shift the market was due to the dilapidated condition of the existing market in the city, and also that the market was getting so congested due to lack of space, when customers in large numbers do their shopping. (Ref: Chaos & No Social Distancing Seen Even Now at Central Market Operating at APMC Yard -Baikampady)

Since the present APMC yard, which was not used for years has been dilapidated and in bad-shape in certain areas-has been the shelter for wild animals and reptiles, where the traders and retailers have come across snakes, rats, mongoose, etc, among the bunch of stray dogs moving around in that yard, when they come in during the early dark morning hours. And with no other options,  for the time being, the merchants have to manage in such harsh conditions, until MCC restores better facilities for the traders to carry on with their trade. And among all these stray animals/reptiles, there was a stranger creeping behind one of the fruit section Godown, and out of curiosity they all started clicking the pictures and making videos.

And this stranger was none other than a 6-7 feet long python, who was the star attraction for the merchants and retailers, when they arrived at APMC yard, this morning, 17 April 2020. Speaking to Team Mangalorean, Mustafa Kunhi-the President of Central Market Merchants Association,  and owner of a veg/fruit shop at the market said, “We have seen a variety of reptiles moving around this yard, ever since we moved in to carry out the business. But sighting a python this morning, has created fear among our merchants and retailers, and many are worried, what other poisonous snakes or reptiles may sneak into their shops?  since the area has been neglected and due to wild grass around, it has given scope for these creatures to creep in. MCC should look into this situation so that none of merchants or retailers are harmed by these reptiles etc”.

And regarding the shifting of the Central Market from the City to APMC yard in the outskirts of the City-Baikampady, Mustafa said, “This move to shift the Central Market from City to APMC yard was done in a hurry, and with no proper intimation to us, but we had no other option but to shift as per strict orders from district admin and MCC. Before they shifted us, facilities should have been upgraded here, which is not done, and traders and retailers are facing hardships. And now we have to face the nuisance of these reptiles. We can’t do business in the open air in the hot sun, and later during the rainy season. Many of us have been doing business at the Central Market for over three decades, and before they demolish the present market building they should give us time so that we can make other arrangements. Forcing us to shift and in the same time demolishing the present market building for a more sophisticated one is not fair at all”.