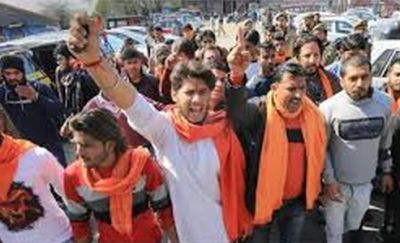 Hyderabad: The police on Saturday arrested five Bajrang Dal activists for attacking the information technology hub of Madhapur on Friday while protesting against Valentine Day celebrations.

They have been booked under various section of the Indian Penal Code and the Prevention of Damage to Public Property Act for rioting, trespass, destroying property and criminal intimidation, by Madhapur and Gachibowli police stations.

According to A. Venkateswar Rao, Deputy Commissioner of Police, a group of 10-15 people damaged properties and caused trouble in the IT hub.

The Bajrang Dal activists moved in a group on two-wheelers from KPHB towards Hitec city and attacked an ice cream shop. Carrying flags, they were raising slogans against the Valentine Day. They also targeted ABN Sharat Mall, Bikanaerwala and Inorbit Mall.

When the police reached Inorbit Mall, they escaped. The accused had been identified with the help of CCTV footage.

Meanwhile, Minister for Information Technology and Industry K. T. Rama Rao praised the police for acting swiftly to arrest the accused. “Well done Vandalism has no place in a civil society & more so in a beautiful city like Hyderabad,” tweeted Rama Rao.

Serious action should be taken on those people who attacked.