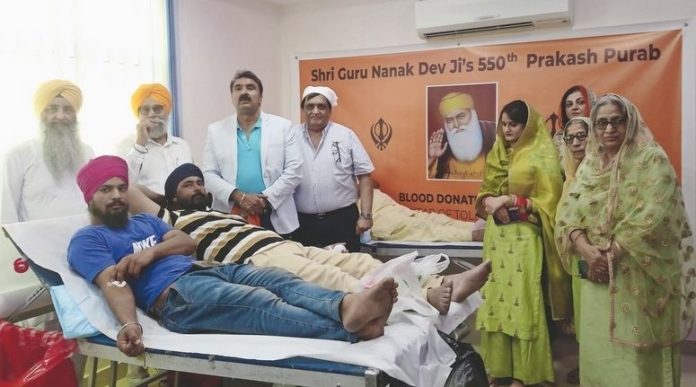 Abu Dhabi: To commemorate 550th birth anniversary of Guru Nanak Dev, founder of Sikh religion, 550 volunteers will donate blood in six blood donation camps. The second camp was organised at Gurudwara Mata Sahib Kaur in Mussafah on Friday by the Indian Embassy in cooperation with the Abu Dhabi Blood Bank.

Navdeep Singh Suri, Indian Ambassador to the UAE, said the camps are planned across Abu Dhabi and Al Ain.

“We are happy to celebrate 550th birth anniversary of Guru Nanak. I am pleased at the active participation and support from the Punjabi community. As part of the celebrations, we have decided to mobilise 550 volunteers to donate blood to Abu Dhabi Blood Bank. The response has been outstanding during the first two camps. I am confident that by our final camp, we would reach the target of 550 volunteers,” the ambassador said.

The campaign was led by members of the Sikh community with participation from people of different religions.

“Apart from this initiative by the embassy, we have been holding such camps for long time. Earlier, it was done by individuals and now we are doing it an organised way,” coordinator at the Gurudwara Harjinder Singh said.

Other coordinators Jaspal Singh and Gurudeep Singh said: “From 2014, our community associated with the Sarbat Da Bhala Charitable Trust in Dubai. In 2016, we went to the Abu Dhabi Blood Bank. This is for the first time that we have held this camp at our Gurudwara.”

Jaswinder Singh and Jaswant Singh noted the drive had participation from people of all religions. “Following the teachings of Guru Nanak Dev that God is one, we had sent out invites to various associations and community groups through social media and by announcement after Gurudwara prayers. This is what the Year of Tolerance is all about,” they said.