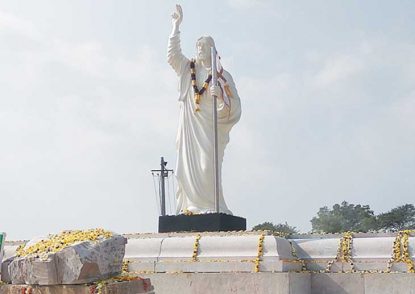 KAPALA BETTA, KANAKAPURA (RAMANAGARA DISTRICT): Anthoniyamma Mary flips the pages of the Bible which according to her is more than 100 years old. “He (Jesus) has given us everything and it is our turn to give him back. It is mentioned in the book. We were told during Sunday prayers to give Rs 1 lakh for the construction of the tallest Jesus statue. I am happy contributing to it.”

With pro-Hindu organisations opposing the construction of the statue, local residents seem to be determined to go ahead with it.

There are 800 houses in villages near Kapala Betta. Christians are in majority here. Each house is contributing Rs 1 lakh for the 114-foot tall statue. Many of these families largely depend on sericulture.

Anthoniyamma and her husband stay at Jyothinagar which is close to Kapala Betta. They work as coolies in sericulture farms for their bread and butter. They also own a couple of sheep.

“We were told to contribute for the statue. Every month, we save a little money and pay at the church. When we ran short of money one month, we even auctioned our calf (goat) for Rs 6,000. We paid this amount to the church as part of our contribution,” she said.

According to the villagers, they offer prayers to the Cross on the hilltop. Now, they have symbolically placed a five-foot-tall statue of Jesus Christ on a platform there. The tallest statue will come up nearby for which Congress leader DK Shivakumar laid the foundation stone last month.

Lewis and Mary, another couple who are also sericulture workers, have four children. They too have committed to pay the money for the statue. Asked how they will raise such a huge amount, Mary said, “If I need money for my children’s education or marriage, I will take a loan. Paying Rs 1 lakh to the church is my responsibility and I will do it by taking a loan.”

Lily Mary, who is married to a farmer and lives in Sipayi Doddi, has a special connection with Kapala Betta. “My daughter was about to deliver a baby. Doctors in Bengaluru said they could save either the mother or the baby. We went to the hilltop and prayed. Now, my granddaughter is five years old. Both mother and daughter are healthy. I have been saving money every month for the statue. We are happy that it is coming up in our place.’’

You will find a sprinkling of Hindus here. They too offer prayers at Kapala Betta – like Ramu and his son-in-law Krishna, residents of DK Nagar (named after Congress leaders DK Shivakumar and his brother DK Suresh who constructed 40 houses free of cost).“We have no issues with the Christ statue coming up here. We were neither told to convert nor contribute,” said Krishna.

Many villagers told TNIE that they only want land and are not asking for money from the government. Susheelamma from Kadledoddi said, “There is no Shiva temple here as claimed by a political party. Even Hindus visit and they do not have a problem.”

But a few Hindus did object. Bogesh (name changed) said, “We are minorities here. Our children will get influenced by Christianity. We cannot leave this place, we were born and brought up here. There are some Hindu temples which are in a bad state. Why isn’t anyone bothering to get them repaired,” he asked.