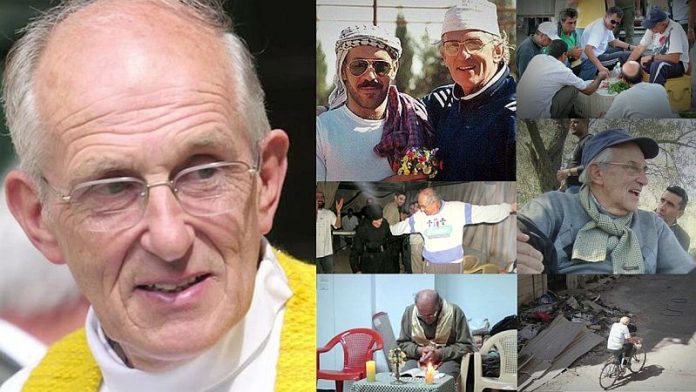 Miryiam (name changed) spoke in a steely voice, but with passion as tears welled in her eyes, “Yes, they killed him! But for me, Abouna Frans will never die!” Those words of a young lady are a fitting tribute to a person who meant so much to her and to many others. Her profound sentiments, echo the feelings of hundreds of others who were impacted by Abouna Frans. “I went for retreats with him. He listened to my pain and brokenness; when I cried, he cried too. He was truly a Father to me!” She goes on and on narrating one incident after another- each time unfolding the holiness, the humanness, the sensitivity and the grace that were the hallmarks of a modern-day saint.

Fr. Frans Van Der Lugt was brutally gunned down in Homs Syria, five years ago, on April 7, 2014. ‘Abouna Frans’, as he was lovingly called, was a Dutch Jesuit who was born on April 10, 1938, in The Hague. His father was a banker. In 1959, he entered the Society of Jesus and seven years later opted to serve as a Jesuit in the Middle East. With the exception of a short break to complete his doctorate in Psychology, he spent almost fifty years (from 1976) in Syria. He founded the Al-Ard institute in Homs, where handicapped children of all religions and ethnic groups found a warm and welcoming haven.

In 2011, when civil war erupted in Syria, he chose to remain in the country, among the people he loved, suffering the shortages and pains of the conflict, alongside both Muslims and Christians. As the fighting intensified, Fr Frans moved to the Jesuit residence in Boustan –Diwan (the inner city). From there he shared the suffering of the inhabitants, refusing to leave, even as that part of the city continued to be bombed from all sides. His centre became a home for those who had nowhere to go: Muslims and Christians; old and young. It was a ‘safe place’ for them and Fr Frans was their refuge. His message to all was one of hope: of mercy and reconciliation, of justice and of peace!

The Jesuits of Netherlands and Flanders recently produced an animated film on Abouna Frans. The film begins when he is being killed and then he gradually looks back into his life. In the film he makes a powerful appeal to the whole world: only love triumphs and it must come first!

Abouna Frans was an extraordinary person: fully human, fully alive. He was warm and compassionate to all; to the youth, he was an inspirer and motivator, who never tired of hiking, trekking and long walks in the beauty of nature; to the elderly, he was a friend and mentor; little children loved to cling to his long legs; for Muslims and Christians, for atheists and agnostics, for those belonged to different sects and rites, he was a bridge-builder, a reconciler, a person who could draw the best out of them; for the spiritually weak and lost, he was a source of strength and a patient listener. He was a true shepherd, always in the midst of his sheep, who smelled of them. They simply loved him. He had the courage of his convictions and he communicated this unequivocally.

Every year, the World Health Organization celebrates 7 April as World Health Day. It was significant that Abouna Frans was martyred on that day. He was a healer – he embraced all those who suffered from illness – be it physical, mental or spiritual. Like Miryiam, an encounter with him brought healing, a great consolation, a movement towards wholeness. The theme of World Health Day 2019 is ‘Universal Health Coverage: Everyone, Everywhere’. Abouna Frans lived this theme as he reached out in very tangible ways – to all who needed him.

Above all, he was a man of deep prayer who was able to communicate the ‘joy of the Gospels’ to all. The sparse room he lived in, is a testimony to his frugal and simple lifestyle. Pope Francis in his Apostolic Exhortation on holiness ‘Gaudete et Exsultate’ says, “we are inspired to act by the example of all those priests, religious, and laity who devote themselves to proclamation and to serving others with great fidelity, often at the risk of their lives and certainly at the cost of their comfort. Their testimony reminds us that, more than bureaucrats and functionaries, the Church needs passionate missionaries, enthusiastic about sharing true life. The saints surprise us; they confound us, because by their lives they urge us to abandon a dull and dreary mediocrity.” Words befitting to Abouna Frans because he truly epitomized holiness.

On 6 April, hundreds of people, from all walks of life, gathered in Homs, to celebrate the memory of Abouna Frans. For many who were touched by him, this was the first time, they were coming together after his death and the years of war. At the homily during the Eucharistic Celebration, Fr Arturo Sosa, the Superior General of the Society of Jesus, shared with the Congregation extracts from Fr. Frans’ homily, at his First Mass on 30 May 1971, in which he said, “only when my hands are empty that I can really receive the other!”. Prophetic words indeed from a man, who like his master Jesus of Nazareth, lived these words, joyously and unconditionally embracing others. On 7 April, the fifth anniversary of the martyrdom of Abouna Frans, hundreds more are expected to gather at the St Joseph’s Jesuit Church in Beirut for a special Thanksgiving Eucharist which will be presided over by Fr. Arturo Sosa.

Abouna Frans comes as a soothing balm to our broken and fragmented world. His voice was one of reconciliation and peace. He transcended the narrow confines of religion and rituals; everyone to him was a sister or brother – a human being. He gave to all a meaning and purpose in life. He accompanied them, encompassed and communicated love and ultimately, like Jesus, laid down his life for his people and for a greater good! He continues to live in the hearts and minds of many! The words of Miryiam keep re-echoing, “Abouna Frans will never die!”

About the author: Fr. Cedric Prakash SJ belongs to the Gujarat Province. He is currently in Beirut on a brief visit. Earlier, he had spent three years working with the Jesuit Refugee Service in the Middle East. During that assignment he visited Homs a few times; he has also met and spoken to several people who were very close to Abouna Frans.