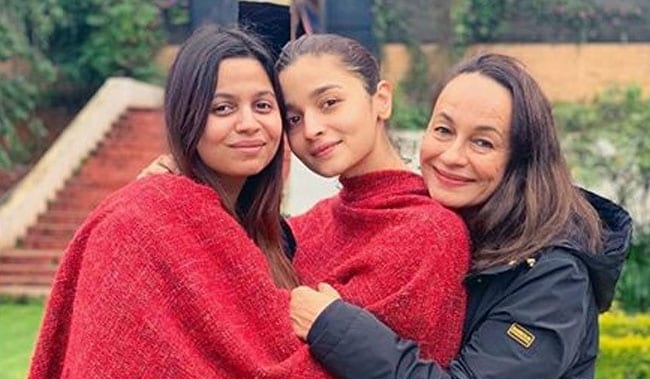 Ooty: Actress Alia Bhatt is getting a chance to spend quality time with her family while shooting in Ooty, and she is loving it.

The actress took to Instagram to share a post-card worthy photograph with her mother Soni Razdan and sister Shaheen Bhatt from Ooty, and it spells “a whole lotta love”.

In the image, Alia is covering Shaheen with half her shawl as her mother Soni hugs her from the back.

“A whole lotta love,” she wrote along with the photograph.

In the image, the “Raazi” actress is looking pretty without any make-up. Soni also oozes elegance as she smiles for the picture-perfect moment.

Alia is in Ooty to shoot for her father and filmmaker Mahesh Bhatt’s “Sadak 2”, scheduled to release on July 10, 2020.

“Sadak 2” is a sequel to the hit 1991 film “Sadak”, a romantic thriller, which featured Pooja Bhatt and Sanjay Dutt. It was one of the highest-grossing Hindi movies of 1991 with a popular musical score. Late Sadashiv Amrapurkar’s award-winning performance as the villain won hearts and his character is still considered one of the all-time best bad guys in Bollywood. The film was inspired by the 1976 American movie “Taxi Driver”.