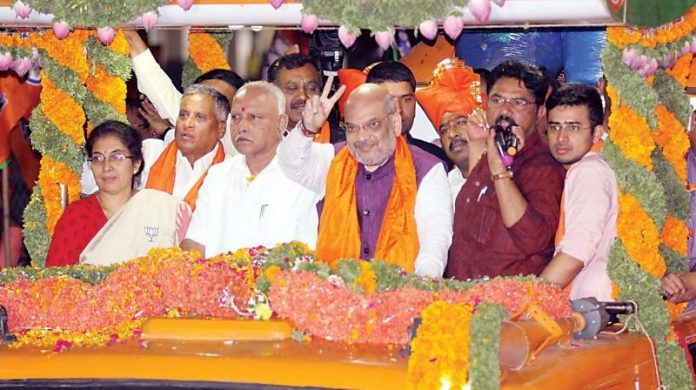 Bengaluru: The discord in Bangalore South constituency over the denial of the party ticket to Tejaswini Ananth Kumar, appears to have been papered over for now, hours before the arrival of BJP National President Amit Shah in the city for a massive road show with the party appointing Tejaswini, as party state vice-president.

In fact the very purpose of Shah’s arrival in the city for a one-stop show, was intended to make sure that BJP leaders and workers here closed ranks and ensured that young Tejasvi Surya, who was finally chosen as the candidate, did not face any dissent in Bangalore South, considered one of the safest seats by the party in the state.

The roadshow, held to garner support for Tejasvi, saw the BJP presenting a united front with sulking leaders like R. Ashok and V. Somanna besides Tejaswini herself accompanying Mr Shah as he made his way from Padmanabhanagar through the constituency covering Jayanagar and BTM Layout.

While most BJP MLAs in the constituency and even party state president B.S. Yeddyurappa had backed Tejaswini, widow of former Union Minister Ananth Kumar for the ticket, the Sangh Pariwar put its weight behind Tejasvi, known as a rising star in the party.

Mr Shah’s address to party workers was cancelled as the roadshow, which was scheduled to begin at around 6.30 pm, was delayed by two and a half hours. By making sure that Tejaswini was present along with senior BJP leaders during the road show, Mr Shah has managed to send out a message to party supporters in the constituency that the differences over candidate selection have been resolved and Tejaswini, who enjoys massive sympathy following the death of her husband last year, has been suitably accommodated.