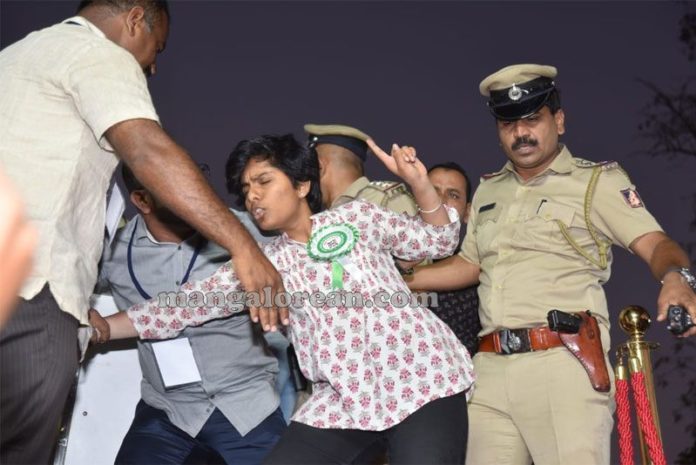 Bengaluru: Amulya Leona, the woman who shouted raised “Pakistan Zindabad” slogan in the presence of AIMIM chief Asaduddin Owaisi at an anti-Citizenship Amendment Act (CAA) rally in Bengaluru, has been booked under sedition case of the Indian Penal Code (IPC).

Police said Amulya has been sent to 14-day judicial custody.

A case under Sec124A (Offence of sedition) of the Indian Penal Code was registered against Amulya shortly after she raised Pakistan Zindabad slogan at Asaduddin Owaisi’s rally. The police are expected to interrogate her regarding the slogan.

She will also be produced before a court after her interrogation.

BJP Lok Sabha MP Shobha Karandlaje said these protests are not against the anti-Citizenship Act but a “plot by the pro-Pakistan elements” to create unrest in the country.

A young woman on Thursday raised “Pakistan Zindabad” slogan in the presence of AIMIM chief Asaduddin Owaisi, leaving the organisers of an event to protest against the CAA, NRC and NRP in Bengaluru red-faced.

Asaduddin Owaisi denounced her action at the rally and asserted “we are for India”.

The woman, identified as Amulya, asked people to shout with her “Pakistan Zindabad” after the organisers of the event under the banner of “Save Constitution” invited her to address the gathering soon after Asaduddin Owaisi came on stage.

In the video, Asaduddin Owaisi is seen rushing back to the dais to stop the woman from chanting the slogan. As Asasussin Owaisi rushed to snatch the mike from her hands, he was joined by others who tried to remove her from the stage.

The woman, adamantly, raised the slogan again, repeatedly. Later, the police stepped in and removed her from the dais.