Home Mangalorean News Local News Attn: Mayor! Have You Noticed that the Road Leading to your House... 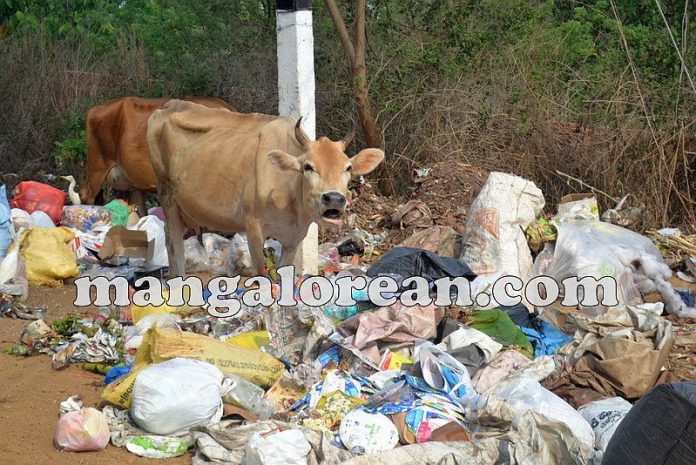 Attn: Mayor! Have You Noticed that the Road Leading to your House is FILTHY?

Mangaluru: Before going further into details of this report, I want to extend my heartfelt congratulations to our newly elected Mangaluru City Corporation Mayor Bhasker K Moily, and wish him all success during his tenure as the First Citizen aka Mayor! – and in the same time look forward to great development work from his side, thereby take the so-called “SMART CITY-Mangaluru” to greater heights.

Okay, now coming to the real topic, about how “Swachh Bharath”, and for that matter, “Swachh Mangaluru” is being abused locally here, and one stretch of the road starting from Kulshekar until the far end of Neermarga, in the outskirts of the City, is being totally littered with garbage at many spots, where even stray animals, including cows, are feasting on the thrash. Holy Cow! The scenes are pathetic to watch where garbage is scattered along the road side-take a trip from Kulshekar towards Neermarga or little beyond, or return back on the same route {Neermarga to Kulshekar} you’ll be surprised to see the amount of garbage that is littered all along this route.

And this scene of filthy garbage is NOT just of today but has been there for months and years. And even after constant complaints and reminders from the residents of those areas, no one has come forward to rectify the Stinky Issue? And for the fact, the best part is that our new MCC Mayor Bhasker Moily lives right in the middle of this road stretch, where his residence is located near Cambridge School- Paldane/Neermarga, Mangaluru. The Mayor takes this road every single day in order to reach his residence- “But why has he not taken any initiative in seeing that the area is Swachh?” -is the question many ask Bhasker K at the moment, after he got elected as MCC Mayor, even though he didn’t take action while he was the Corporator of that area/Ward.

We have seen our present Mayor at many Swachh Abhiyan programmes, also at the one which was organized couple of months ago by Cordel/Kulshekar Church, and as one of the guest for that event, Mayor Bhasker had insisted that we all should make sure we keep our City tidy and garbage free, and that he will do his best to see that Mangaluru reaches the number one in the Nation, as the cleanest City, since Kudla was number 3 Nation’s cleanest City in 2016. Okay, well said by the Mayor, then how come the roads leading to his residence are still filthy every single morning, until the poor Pourakarmikas of Antony Waste Management Cell {company that hauls garbage for MCC} have to do the dirty cleaning job. The photos incorporated in this report are just a part of the garbage that was clicked along the stretch of this road- there is much more thrash than this..?

Digging work of the Hill has created red soil dust to blow away onto to the road affecting the motorists and pedestrians. Pretty soon, when heavy rains lash this area, this red soil will drain onto to the road, creating more hazards to commuters.

Apart from the garbage issue, I want to bring to the notice of the Mayor is about the digging of hill done on the Neermarga stretch of road, for road widening. While the work is still going on at the moment, where lots of soil is accumulated and the soil dust is seen blowing on to the road making it hazardous for the motorists. That’s one issue now-but when the City is going to be hit with torrential rains during monsoons in the nearest future, just imagine what would happen if all the red soil gets drain down onto the road. It will be a messy issue, and hazardous for motorists. Hope the Mayor will look into this situation for the safety of the motorists and also for the safety of pedestrians who walk by that way.

Concrete Mix fallen from the moving Trucks has become hard on the road, posing safety hazards to motorists, especially Two-Wheelers

Also I want to bring to the notice of the Mayor, while climbing the road from Baithurli Junction towards Neermarga, due to regular movement of Concrete Mix hauling trucks, a lot of the concrete of the concrete mix has been dumped on the road when the trucks make a steep turn- and at the moment the concrete fallen on the road has gone hard, making it a safety issue. especially for two-wheeler riders who take that road. It is learnt that a few months ago, a few of the residents and a Social worker had approached the truck/construction owner to remove the fallen concrete mix from the road- who obliged to do the needful, but until now has done nothing. Mayor, it’s your turn to take action on this issue and do the needful for the motorists, especially the bike riders.

One senior lady, Latha Kumar walking on the Neermarga road, pointing out at the pile of garbage where cows and birds were feeding on it speaking to Team Mangaloreansaid, ” I walk on this road every morning and evening to buy milk and other groceries, and I have to walk by this stinking garbage. Sometimes the smell is horrible when people dump meat and fish wastage. This will also lead to health-related problems when people walk by this garbage dump. Our past complaints have proved no results. I only wish our Mayor, who lives a little distance from here should take immediate action for the safety concerns of the citizens. I am hoping for the best from our beloved Mayor”.

Despite the hype around the cleanliness drive after Prime Minister’s clarion call for Swaccha Bharath Abhiyan, filth is still visible on many of our roads. With the dumping of garbage on both sides of this Neermarga/and also little further from Baithurli Junction, many a time people using the road are put to inconvenience by the stench that emanates from the garbage dumped indiscriminately. In spite of awareness on why the use of plastic should be avoided, people continue to use plastics. It forms a major chunk of the garbage dumped along the roads. Even though Good Samaritans associated with Ramakrishna Mission, and also NGO and other social organizations have been doing a massive clean up work, but unfortunately people are still ignorant in littering waste all around.

In conclusion, Yes, we agree that disposal of garbage continues to be a challenge faced by the civic authorities. Officials say that they alone can not keep the city clean. A change in attitude among people towards the issue of cleanliness is need of the hour. In spite of many awareness programmes on ‘Swachh Bharath’ people have the habit of dumping garbage on the streets and pavements. Adding to this, construction debris is also dumped. Also looking at the outgrown grass and other vegetation beside these city outskirts roads, it seems like Swachh Bharath Abhiyan is not making up to the mark. At a few places, people have recklessly thrown garbage into the drain along the roads. As a result, the drain is clogged and garbage is strewn around.

On a final note, Team Mangalorean on behalf of the citizens and motorists taking the City to Neermarga Road kindly requests Mayor Bhasker K Moily to look into this “Filth Related Issue” and kindly do the needful in making this stretch of the road “Swachh and Garbage FREE!” Thank You, Sir!