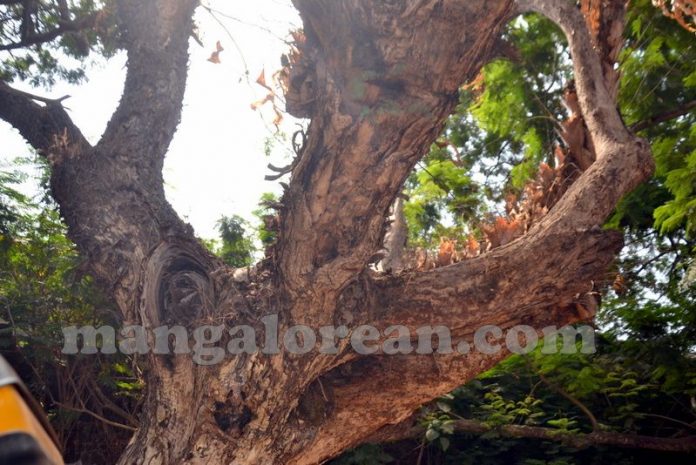 Mangaluru: I do agree that chopping down trees is not good for the environment- but what if some of these age-old trees show signs of danger to the people. In the past there have been many incidents occurred in town, where age-old trees have come crashing down on vehicles, walls, shops etc, due to the negligence of MCC or other district administration officials not taking any quick actions even when these trees show signs of danger to the public, motorists or nearby businesses. Although just recently we had featured an article where a tree in front of LIC building, next to RTO office has developed hollowness at the bottom-chances are that anytime due to a heavy hailstorm or high blowing winds it may come crashing down on the vehicles parked below it, specially auto-rickshaws, or maybe even pedestrians or nearby shops.

Having read that article, an auto-driver by the name of Anthony D’Souza, who parks his auto-rickshaw near the Fr Muller Hospital Auto-Stand called me up and said, ” Alfie Sir, I heard that you have highlighted many civic issues in your Mangalorean.com website, which have received positive results. Could you please highlight one of our safety hazard issue that many of the auto-drivers fear about it daily. We have two trees almost ready to crash anytime, and unfortunately, we have to park under these dilapidated trees. Kindly do the needful”. Saying “Yes” to D’Souza’s request, Team Mangalorean rushed to the spot, clicked few photos, and here is the story for the kind perusal of the concerned MCC officials or other district authorities to do the needful, before any accident takes place.

Speaking to Team Mangalorean, Anthony D’Souza, and a bevy of auto-rickshaw drivers said, ” We have complained about these trees, especially two of them, to the MCC officials, to look into them, which may anytime come down crashing on our vehicles parked here. Sometimes when it blows heavily, we are very much worried about our vehicles and us, that these trees may crash. Even though we have submitted our complaints to the concerned MCC persons, but if more is highlighted in the media it will have more impact. We are extremely thankful to Mangalorean.com for highlighting this safety hazard issue so that the concerned could take the necessary action before these trees tumble.”

“If you look at the branches of one of these trees, the branches one day due to heavy winds snapped but luckily they didn’t fall on us, instead rested on the nearby wall. But still there is one tree which is almost dried up, and you never know when it may collapse on us. There was a stay order not to cut these trees down during the road widening- but that stay order has been lifted, and many trees on this Kankanady-Jeppu stretch have been chopped down recently. Buy why are they delaying in cutting down these hazardous trees which are dangerous to our lives” added Karunakar, yet another auto-rickshaw driver.

In conclusion. big trees need space for branches and roots too. Now there is a need to review, conduct a census of trees within the city, decide how many are safe, how many are to be pruned, how many need felling. This is the responsibility of MCC. I am sure they will fail to realize until they are hauled up by court. During road construction, trees are damaged. Once they become weak and are held loose, one small thunderstorm would make their posture changed from vertical to horizontal. Drilling of bore-wells around the city in all corners is another reason for the same thing. And regarding these trees which have become weak, dried should be immediately looked over by MCC and take necessary action as soon as possible- before any accident resulting in injuries or death.

Mangalorean.com pls do Highlight a article of the incomplete road widening from Fr.Mullers to NandiGudda road . All the trees were cut down for the widening but now no signs to complete the project. What is the use of cutting down the trees and harming the beautiful trees ?