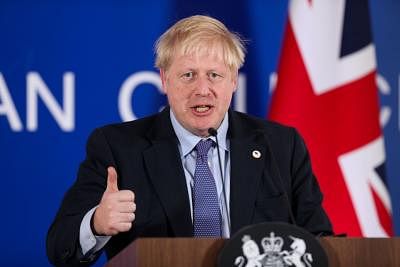 London:  Carrie Symonds wore a saree as she joined her boyfriend, UK Prime Minister Boris Johnson in a visit to a Hindu temple for the couple’s first joint outing before the December 12 general election.

The Prime Minister, who is ratcheting up his campaigning ahead of the crunch ballot, was seen at the Neasden Temple here on Saturday with his 31-year-old girlfriend for the first time in over a month, the Daily Mail reported on Sunday.

They offered prayers and met worshippers and members of the Indian diaspora in the temple.

The couple’s last appearance was at the Conservative election launch on November 6.

Saturday’s outing came a day after a poll revealed that Johnson bested opposition Labour Party leader Jeremy Corbyn in their second and final debate ahead of the election.

The YouGov poll said that Johnson appeared to have thwarted Corbyn’s bid to deliver a knockout blow in the face of surveys indicating that the incumbent’s Conservative Party would win an absolute majority in the election, reports Efe news.

The main themes of Friday’s debate, which aired on the BBC, were Brexit and the need for investment in public services.

While Johnson’s Conservatives were overwhelmingly pro-Brexit, Labour voters remained divided and Corbyn has sought to accommodate those opposing views, insisting that he would remain neutral if there was a second referendum.