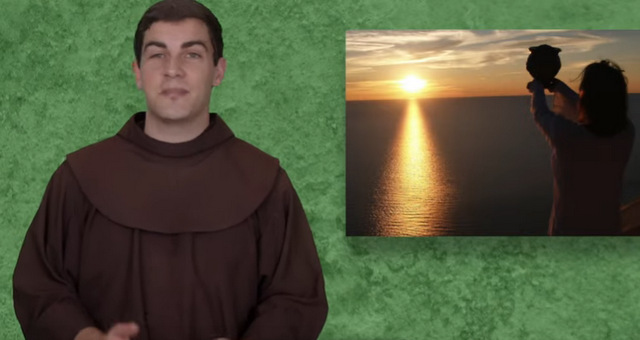 Can a Catholic be cremated?

Today there are many creative ways of laying the dead to rest. Besides the traditional burial in a casket, many now choose to be cremated leaving their ashes in an urn, mixing them with seeds to plant, and even scattering them in sentimental places. All of which can be really be meaningful and beautiful.

Until as recently as 1963, the Catholic Church expressly forbade the practice of cremation and even now maintains strict laws as to how a body is to be laid to rest. What does the church teach and why is it so important?

For centuries the Catholic Church did not mess around when it came to cremation and it was not allowed. Anyone who tried would be punished.

The 1917 Code of Canon Law stated that “If a person has in any way ordered that his body be cremated. It is illicit to obey such instructions, ……and must be refused ecclesiastical burial.” Nobody, no Christian funeral. The reason for this comes down to the Christian understanding of the human person. Despite many popular notions, many of them inspired by the philosopher Plato, Christians have never accepted that we are merely souls, only trapped in a body, and when we die only our souls detach from the body, and our souls go to a different place. For us, the human person is a hypostatic union of the two. The soul animates the body and the body gives substance to the soul, meaning that the two will always go together and cannot exist without the other. We are just as much as our bodies as we are our souls. At the resurrection then, we do not believe that Jesus will raise our souls alone but our bodies as well. This belief is so fundamental to our faith that it was included in our original creeds that have been professed for over 1600 years. The Apostle’s Creed, for instance, states that “I believe in the Holy Spirit, the holy catholic Church, the communion of saints, the forgiveness of sins, the resurrection of the body, and life everlasting.” This is in stark contrast with what pagan religions would have practised at the time when these creeds were developed, burning the body and scattering the ashes. While the reasons for these practices have varied with time and place, the same underlying assumption unites them all – the body is of no consequence to the afterlife and thus can be annihilated.

For centuries the difference in theology influenced the difference in practice. Christians buried their dead in catacombs, while pagans burned theirs. If a Christian were to seek cremation, it was seen as an affront to the Christian doctrine, either as an act of another religion or the intentional anti-catholic work of a secret society. In 1963 the Church stated, “The Church has especially employed such sanctions in the face of hate-inspired assaults against Christian practices and traditions by those who imbued with the animosity of their secret societies, sought to replace burial by cremation. This practice was meant to be a symbol of their antagonistic denial of Christian dogma, above all the resurrection of the dead and the immortality of the soul.” So why was it that then in the same 1963 instruction that the church changed her position in the practice allowing Christians to be faithfully cremated? In short, the Church began to realize that there could be many reasons for the practice that did not contradict our faith. While the original pagan practice was intrinsically connected to a theology of the body that was completely antithetical to ours, the modern practice is often motivated by more practical concerns such as economics, public health, or social expectations. The same instruction went on to state that “Such an intent clearly was subjective, belonging to the mind of the proponents of cremation, not something objective, inherent in the meaning of creation itself. Cremation does not affect the soul nor prevent God’s omnipotence from restoring the body; neither, then, does it in itself include an objective denial of the dogmas mentioned.” In other words, the problem is not with cremation per se, but with the attitude that was traditionally associated with it. If that attitude is not present and the proper Catholic understanding of the body can be maintained then the Church sees no reason to forbid it.

The issue was never a physical or a literal one that if we cremate a body then there will be nothing to raise. The fact of the matter is that even a body that is buried will decay into nothing eventually. Really the idea of having a singular static body is just untrue. We are constantly growing, changing, and rebuilding so much so that scientists have shown that 98% of the atoms that make up your body right now will be replaced within the next year. Quite literally you have a completely different body every single year. For this reason, the 2016 update to this teaching states “Thus cremation, in and of itself, objectively negates neither the Christian doctrine of the souls immortality nor that of the resurrection of the body.” If you wanted to be cremated in the Catholic Church and the reasons for doing so do not contradict our faith, it is perfectly allowed. 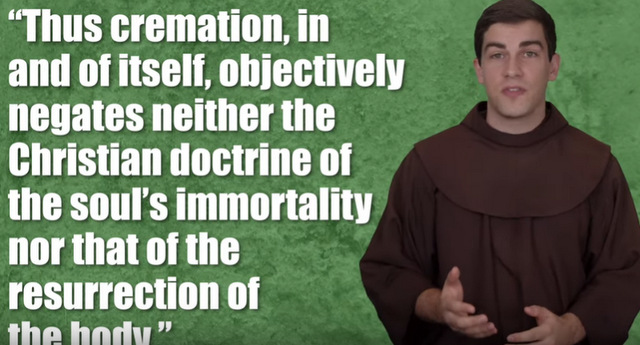 The Church has even come out with an official prayer for such situations. Of course, this does not mean that anything goes at this point. The same attitude that originally forbade the practice still remains, which means that even if the body of the deceased is cremated there must be a burial and permanent internment. Scattering ashes is still expressly forbidden. “In order that every appearance of pantheism, naturalism, or nihilism be avoided, it is not permitted to scatter the ashes of the faithful departed in the air, on land, or at sea or in some other way, nor may they be preserved in mementoes, pieces of jewellery or other objects.” As sentimental as it might be to scatter someone’s ashes in a beautiful place, to mix them with a seed and plant them in the ground, or to split them into a number of necklaces and carry them around wherever you go; we have to ask ourselves what this practice says about our attitude towards the body. Do we treat it as something that is inconsequential and so can be thrown away or do we see it as important to the human experience and thus to be respected. The Church believes that it is something to be respected. Regardless of whether a body is buried intact or cremated it must be kept whole and in one place permanently set in a noble public location. This reflects our theology of the importance of a body but also keeps us connected with the dead after they are gone. “The reservation of the ashes of the departed in a sacred place ensures that they are not excluded from the prayers and remembrance of their family or the Christian community. It prevents the faithful departed from being forgotten, or their remains from being showed a lack of respect, which eventually is possible, most especially once the immediately subsequent generation has too passed away.”

For Christians, death is not something that should be feared or experienced alone, nor does it completely cut us off from the living. We are people who believe in eternal life and so the dead should be remembered and prayed for. For centuries we have buried our dead as an assertion of the importance of the physical world in our salvation and as a remembrance of the power of Christ to raise the dead. Full burial or cremation this truth remains, and I think that is what is most important to remember about this question. The question of what to do with the remains of the dead is in part for the sake of the dead, showing our respect but really it is for us – how we treat our bodies, how we engage the physical world, and what we hope for in the next life. All of these things are reflections of what we believe in Christ and effect the way we live before we die. The laws of the Church are not meant to be counter-cultural or obtuse but are there to remember who we are and why we were made. The world we live in is not something to be cast aside and forgotten. God created it and he will renew it in eternal life. It would seem to be in our best interest then to treat it with care.

Death is only an opinion others have about you when finish the tenancy in your current body. Don’t get worked up over it.

What about the fact that catholic churches especially in India are replacing old graves with new ones? What happens to the original inhabitant of the grave? Aren’t they just put along with all the other body parts that were dug up from other graves?