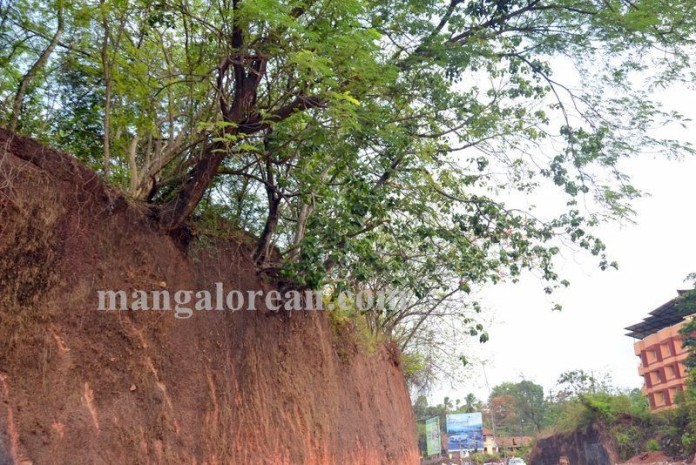 Mangaluru: In the month of May 2016, we had received an email from one of the ardent readers of Mangalorean.com who had alerted Team Mangalorean about the danger posed by a few slanting/leaning trees near the Nanthoor Junction-Mangaluru on NH 17, and we quickly had made a report on it {Ref: www.mangalorean.com/leaning-trees-on-nh-66-near-nanthoor/} dated 21 May 2016. The copy of the published report was sent to MCC Mayor then, and also to MLA J R Lobo, and also the other district administration officials. But unfortunately none of these people had taken action, and these hazardous trees are still on the verge of falling down anytime soon.

And now two years later, the same reader by the name of Suraj Acharya-Mangaluru has once again send us a reminder email of the same issue, where he in his email states, ” Warm Wishes to Team Mangalorean, I am a daily reader of your Website. With reference to the above {Ref: www.mangalorean.com/leaning-trees-on-nh-66-near-nanthoor/} I have mailed you in the year 2016 in the month of May. But still no actions have been taken so far. Today I have seen the same spot and the mud has already slipped from above and fallen to road. There is no doubt that in next coming days those trees might fall down. Hope you will do the needful to the Department concerned before there is risk to happen.”.

So once again in response to Suraj’s email, Team Mangalorean once again quickly visited the same spot again, and clicked few photos as to how the situation looks like. And since our past Mayor, and past MLA did nothing on this safety issue of the commuters- and that now we have a new MCC Mayor Bhasker Moily, and also a new MLA Vedavyas Kamath, we want to bring to their notice of the same hazard that these leaning trees STILL pose to the passing by motorists and pedestrians on this stretch of NH 17 near Nanthoor. We only hope that they will take this issue seriously, and take action before these trees come down on people.

If we have noticed recently, there have been scores of old trees fallen all over the city following strong gales, resulting in damages to vehicles and property. Most of the trees had no room for their roots to spread out and this led to gradual decay. In other cases, growing trees had their branches cut regularly on one side, because they leaned on to private property; the trees grew up topsided and leaned far on to the roads. This means their remaining branches too were regularly being trimmed and they lost strength. The concerned authorities are expected to monitor a city-wide “tree census” to determine how many trees are really a danger to traffic or at risk of falling down during heavy rain and strong winds. Trees which are unable to bear the air pollution and decaying should also be identified. But seems like no one is doing their job right- and as a result we have trees come crashing down on vehicles etc now and then.

And for that matter if you notice, these leaning trees near Nanthoor are fragile and potentially diseased trees which do pose a danger to pedestrians and motorists as they could easily snap in windy and rainy conditions. Many of these trees are leaning/slanting on to the road precariously, and look very fragile and threatening, while some of infected trees may also be destroying the roots. Couple of these trees have their roots protruding out of the soil, and they may be uprooted anytime, and fall right on middle of the road.

Through this report Team Mangalorean is asking as a matter of urgency that these trees near Nanthoor Junction and at many other locations in the City are inspected and that those that appear in any way dubious should be promptly removed, before they crash down on the highway resulting in injuries or death to motorists or pedestrians. Thank You in advance!