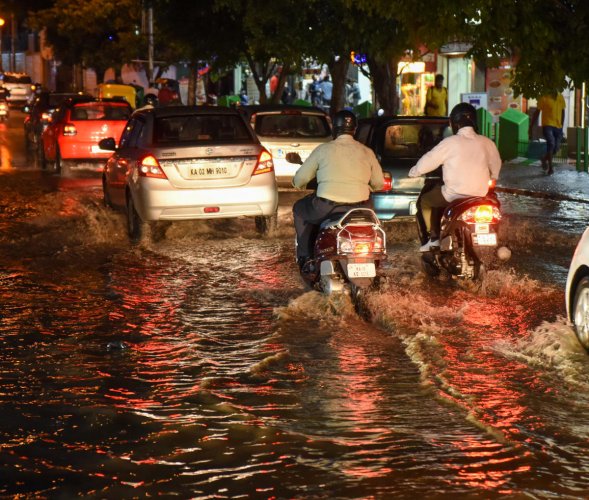 Bengaluru: On Thursday, as another cloudy evening cocooned the city with moderate thundershowers, a woman motorist had a close shave near the Trinity Circle.

The woman sustained injuries after a truck driver lost control of his vehicle due to the rainfall. She escaped death by a whisker, the traffic police said.

Some residents complained of water-logging in certain areas including Kasavanahalli along Sarjapur Road, Mahadevapura, Peenya and parts of Koramangala.

According to experts at the Karnataka State Natural Disaster Monitoring Centre (KSNDMC), T Begur in Nelamangala recorded 36.5 mm rainfall, the maximum in the city on Thursday. Other places including Shivanakote in Bangalore North (20.5 mm), Tavarekere in Bangalore North (24.5 mm), Sampangiramanagara in Bangalore East (20.5 mm) and Devanahalli (22.5 mm) received showers until 8:30 pm.

Weathermen attributed the rainfall to cyclonic circulations in the Bay of Bengal and Tamil Nadu’s coastal region. “The rainfall on Thursday is not too heavy. It is a result of cyclonic circulations activated in the Bay of Bengal. The situation is likely to continue for a few days,” explained Karnataka State Natural Disaster Monitoring Centre director G S Sreenivasa Reddy.

The city will see a cloudy sky on Friday with chances of scattered rain highly likely. Maximum and minimum temperatures in the city will hover around 29 and 20 degrees Celsius respectively on Friday. Same weather conditions are forecast for Saturday as well, according to meteorologists.