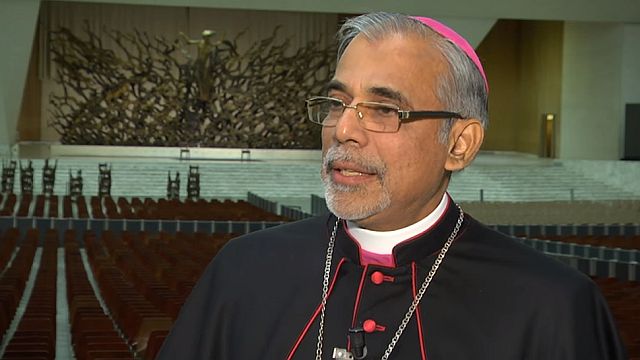 Indian Constitution in Danger, Human Rights being trampled in Name of Development, and Minorities fear for their safety-Goa’s Archbishop Filipe Neri Ferrao

Panjim-Goa: Two weeks after Delhi Archbishop Anil Couto’s remarks on the “turbulent political atmosphere” created a row, his Goa counterpart has said the Constitution was in danger while alleging that human rights were being trampled in the name of development. Urging Catholics to play an active role in politics, Goa’s Archbishop Filipe Neri Ferrao, in his annual pastoral letter, said the community should work hard towards protecting the Constitution, more so because the 2019 general elections were around the corner.

“Today, our Constitution is in danger, (it is a) reason why most of the people live in insecurity. In this context, particularly as the general elections are fast approaching, we must strive to know our Constitution better and work harder to protect it,” Ferrao said in the pastoral letter for 2018-19, which was formally released on Sunday. Catholics account for 26 percent of Goa’s population and wield significant influence.

Alleging that a new trend of mono-culturism was emerging in the country, the archbishop said, “In recent times, we see a new trend emerging in our country, which demands uniformity in what and how we ear, dress, live and even worship. Human rights are under attack and democracy appears to be in peril.” Ferrao further said minorities were living in fear while development was being used as a ruse to uproot people from their land. “The various minorities fear for their safety. People are being uprooted from their land and homes in the name of development. The first victim of development is the poor person. It is easier to trample upon the rights of the poor because those who will raise their voice for them are very few,” he said.

It may be recalled that a similar remark was made by Cardinal Oswal Gracias, president of the Catholic Bishops’ Conference of India (CBCI), last month. Gracias had said there was “growing anxiety” among minority communities “because the government is not acting enough” to protect them. Urging the Catholics to shun “sycophantic” politics and help strengthen democracy, the letter said, “It is advisable that the faithful play an active role in the political field; they should, however, follow the dictates of their conscience while doing so and shun ‘sycophantic’ politics. They should thus strengthen democracy and, on the other hand, help to improve the functioning of the state administration.”

While many saw Delhi Archbishop Couto’s remarks aimed at the BJP government, even though he denied targetting any particular political party, it leaves little to imagination Ferrao’s letter was directed at whom. Criticising Couto, Home Minister Rajnath Singh had said there was “no discrimination against anyone”, while BJP president Amit Shah said “polarising people in the name of religion” was “not appropriate”, even as opposition leaders like Mamata Banerjee and CPI(M) leader Sitaram Yechury backed the Delhi archbishop.

Some one should tell this priest that it takes 2/3 majority to change the constitution.