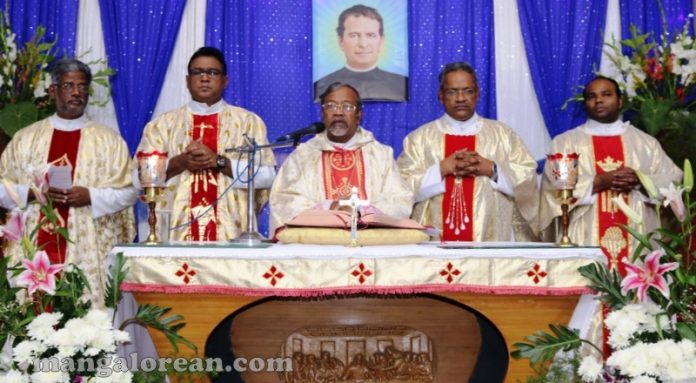 Dr Machado Urges All To Pursue Tendency Of Children

Bengaluru: Archbishop Peter Machado of Bengaluru called upon priests, nuns and lay faithful to cultivate in them the tendency of a child. Dr Machado was the chief celebrant at the feast of Don Bosco at the Salesian Provincial House here on January 31, Thursday.

Archbishop said Don Bosco is a gift to the modern world. What is special about Don Bosco, he posed a question. He wished to go a little beyond the axiom – Don Bosco was a friend of the youth and said he belongs to the universal Church. Don Bosco brings out something which is not found in others (other saints). According to transactional or psychological analysis, there could be three tendencies in each person – Parent, Adult and Child (PAC). As per the strong and dominant proclivity, a person takes the direction using any of the three aspects. One with propensity as a parent could be authoritative, an adult may take a different stand of emotion and an aspect of the child is present in all. All have parent attitude and the child angle is often neglected. People have forgotten to be children, meaning, not to laugh and not to be joyful spontaneously. Life has become artificial. Children are asked to attend classes, to do homework or watch TV, instead of playing in the open air. “We are always tensed and worried.”

Don Bosco strived to bring out the joy of childhood. The day’s gospel pointed out to this aspect of joy and it was relevant to the context. One needs to love children like Jesus who said ‘let little children come to me.’ A child gets engrossed in its own world. Children are simple, natural, open, transparent, honest and spontaneous. The elders should learn from them as more credibility is found in them. A child is more dependent on elders in the family. The role of the shepherds is expected in parents or superiors. Everyone is not a shepherd. Shepherd is one that loves the sheep. According to John’s gospel, sheep recognize the voice of a shepherd and follows him as a shepherd protects the sheep, carries a sheep on the shoulder if called for, makes sacrifices and guards against enemies. The Archbishop exhorted all to take care of children against dangers they are exposed to.

As bishop of Belgaum earlier, Dr Machado recalling an incident said the local police informed him (Bishop) that a priest was lying unconscious outside. Bishop recognized him as a priest of the diocese. The priest had gone to the police station to rescue a boy who was caught by the cops suspecting him to selling something such as drugs. When the priest became conscious (he was asked to wait outside the police station and he had a blackout), the priest told the bishop that the police would torture the boy and so he waited for the boy. This is the sign of a good shepherd.

Archbishop urged all to be happy and to be young at heart, to be fully divine, fully alive and to be fully human. Once Dr Machado was in Rome and a tourist was commenting on the statue of Pieta. The tourist asked the guide as to why Mother Mary was depicted so young as she could be 15 to 20 years older than Jesus who was 33 at that time. The guide replied him saying when we have Jesus with us, we can remain young and enjoy his presence. So, Mary was made young by the artist to share a message. Archbishop Peter Machado reminded all to be like Don Bosco who remained joyful and happy imparting the same among the children with whom he loved to interact constantly.

Earlier, Fr Joyce (Fr Mathew Thonikuzhiyil), Provincial, Bangalore Province, while welcoming Archbishop and all others, spoke about Don Bosco’s system of pedagogy. Quoting someone he said Don Bosco is a complete saint. Don Bosco is a saint not only of Salesians. Presenting a brief background of the congregation, he said Salesians work in 133 countries with 14,672 members for 15 million youth. Thanking God for the vocation, he quoted Don Bosco saying ‘give me souls and take away the rest.’ This continues to be the vision of the Salesians. Fr Joyce said spirituality and spirit of Don Bosco is to inspire all. The Provincial also urged all present to own up what one does and involved in to turn out to be responsible, good and honest citizens, bestowing spirituality and educational values of Don Bosco to the youth.

Soon after the Holy Eucharist, Archbishop Machado also released a CD containing 12 songs, nine songs on Don Bosco and three on social themes. The CD made by Fr John Francis was released to Fr Joseph Benedict Mathias SJ, Rector, St. Peter’s Pontifical Seminary, Bangalore. Among others spoke on the occasion included Fr M K George, Rector, Provincial House and Fr PS George, Provincial Economist. Among those present were priests and nuns from neighbouring institutions including their superiors besides lay leaders and other invitees. The choir made a difference to the Eucharist.