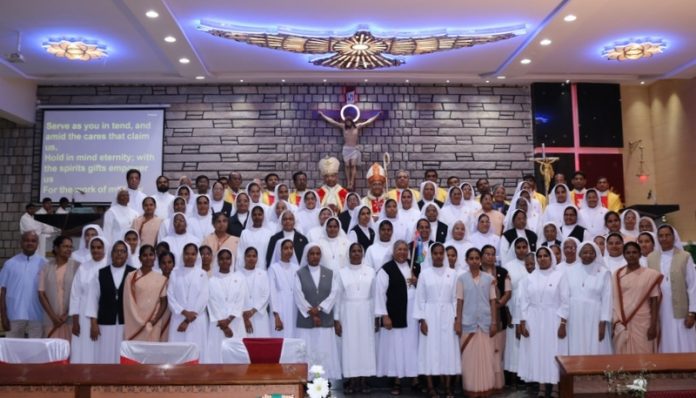 Bengaluru: Archbishop Emeritus of Bengaluru, Dr Bernard Moras, called upon the congregation to work for the poor, in every sense, psychologically, socially, economically and emotionally, following a holistic approach. Dr Moras was speaking as chief celebrant at a Thanksgiving Eucharistic celebration on the occasion of the Canonization of Saint Katharina Kasper, at Ascension Church here on Saturday, November 24.

Dr Moras said Lord listens to the poor who cry out to him. He is good to those who seek refuge in him, whose hearts are broken by sadness, loneliness and exclusion. The Lord listens to those who are trampled in their dignity. They still can find the strength to look up to him for light and comfort. God listens to those persecuted and oppressed for various issues such as false justice. The former prelate of Bengaluru archdiocese urged a large congregation of people besides priests and nuns to trust in Father who can hear and understand. “Blessed are the poor in spirit, for theirs is the kingdom of heaven”.

Archbishop Emeritus said it was a joyful moment on October 14 (2018) when Pope Francis canonized six as saints (Paul VI – Giovanni Battista Motini, supreme Pontiff; Oscar Arnulfo Romero Galdamez, Archbishop of San Salvador – martyr; Francesco Spinelli, diocesan priest, founder of the Institute of the Sisters Adorers of the Most Holy Sacraments; Vincenzo Romanno, diocesan priest; Maria Katharina Kasper, Foundress of Institute of the Poor Handmaids of Jesus Christ (PHJC) and Nazaria Ignacia de Santa Teresa de Jesus, founder of the Congregation of the Missionary Crusaders of the Church. The ceremony was witnessed by over 50 cardinals, 250 bishops and tens of thousands of people all over the world.

It was a very moving moment when Pope Francis pronounced the name of Maria Katharina Kasper as a saint. She was born on May 26, 1820, in Derbach, Germany, at present in the diocese of Limburg. She was the seventh child of a large farming family. As a child, she was well aware of the miserable living conditions of the rustic people, who braved the harsh weather to reap only a scant harvest. Faced with such poverty, Katharina’s focus was on helping the poor around her. With this view, she founded an association whose aim was “to spread virtue by example, education and prayer.” On August 15, 1851, Katharina and four of her companions made their vows before Bishop in Wirges. Katharina became Maria after one year and her association as the Poor Handmaids of Jesus Christ. On June 1, its statutes were approved by the Vatican.

Maria Katharina was Superior General at the age of 31 and she was not keen in expanding the community. However, she opened new houses only when she was invited to do. In 1855, their first house was opened in the Archdiocese of Cologne. At the time of her death on February 2, 1898, the strength of PHJC became 1725 spread across 193 houses – 152 in Germany, 28 in America, four in Holland, two in England and seven in the present Czech Republic.

The Congregation helped the poor German migrants in Holland. Targeting the poor, she instituted shelters and schools for the poor in different countries including India in 1970. She gave importance to living one’s vocation by working with serenity, humility, simplicity and harmony. She gave stress to one’s own sanctification because it is the only way to aid in the salvation of others, she believed.

‘Every beginning is difficult’ can be said about the spiritual life of Katharina. For her obstacles, resistances and blockades were huge. Structures to aid the poor, care for the sick and educate children had been reduced to rubble in the first half of the 19th century. The result of all the old forms associated with the feudal system of the church and monasteries which perished in the French revolution and its aftermath. She once wrote, “Heaven is worth everything” and she saw the needs of the people and could not abandon them. This clear direction can be a model for all including the priests and nuns in today’s context as well. She showed the way to Jesus, uniting and leading all to God. She was much ahead of time. She was completely open to the longing of the people, touched by every need. She was so intimate in the relationship with God and the people. She manifested and shared God’s love with all and initiated dialogue with people of all walks of life, including atheists.

Dr Moras invited all to listen to God in prayer and to recognize the signs that God gives, asking the spirit always what Jesus expects from each person at every moment and in every decision one makes so as to discern its place in the mission one has received.

Katharina Kasper was beatified by Pope Paul VI on April 16, 1978. St. Paul VI called her “a woman of complete faith and strong in spirit”. He took two miracles that had happened through her intercession. Br Leo, from Chennai, who was miraculously healed of his illness, was present at the celebration on Saturday and he presented his testimony after the Mass. October 14th was long-awaited. Katharina is given as a gift to the Church; she is taken as a model who led a life of prayer and dedication. Pope Francis declared November 18 as a day of the poor.

Psalm 34 uses three verbs to describe the poor man in his relationship with God – “to cry” – this becomes a cry that rises to heaven and reaches God. The cry of the poor expresses the suffering, solitude, their disappointment and their hope. The second verb is “to answer”. The Lord does not only listen to the cry of the poor, but he responds. God’s answer to the poor is always a saving act that heals wounds of body and soul, restores justice and helps anew in dignity. The third verb is “to free”. Bible says, the poor live in the certainty that God intervenes on their behalf to restore their dignity. Poverty is not something that anyone desires but is caused by selfishness, pride, greed and injustice. God’s act of liberation is a saving act for those who lift up to him their sorrows and distress. The bondage of poverty is shattered by the power of God’s intervention. The Lord not only listens to us but restores us from all afflictions. To receive God’s grace, one is expected to be docile and attentive to the cry of the poor, taking the example of Maria Katharina Kasper. Dr Moras prayed, ”May she intercede for us.”

Bishop Jose Porunnedom of Mananthavady (Kerala) was one of the con-celebrants at the Eucharist. The PHJC Sisters have their presence in that diocese as well.

Fr John Abraham, the parish priest and co-celebrant placed the monstrance containing the relic of the saint in front of her portrait. Dr Moras unveiled the image of St Katharina Kasper and read out a special prayer. He also gave a blessing with the relic soon after the Eucharist. A short video clipping on the saint was presented on the occasion prior to the Mass. The main celebrant, two of the con-celebrants, provincial, Sr Flora and the flower holders showered rose petals at the foot of the image.

Earlier, Sr Flora welcomed the chief guest and all others before the Eucharistic celebrations. She also presented a brief background of the saint besides giving an introduction on the celebration.

A band set played by students of Catherine Public School, Vidhyanagar, led the procession prior to the Holy Eucharist.

Sr. Sharlin, Vice Provincial, coordinated the entire celebration. Sr Flora PHJC thanked the main celebrant, con-celebrants and all concerned after the Mass. She felicitated the bishops, priests and other invitees with shawls and mementoes The concluding hymn was sung by the Sisters in German.