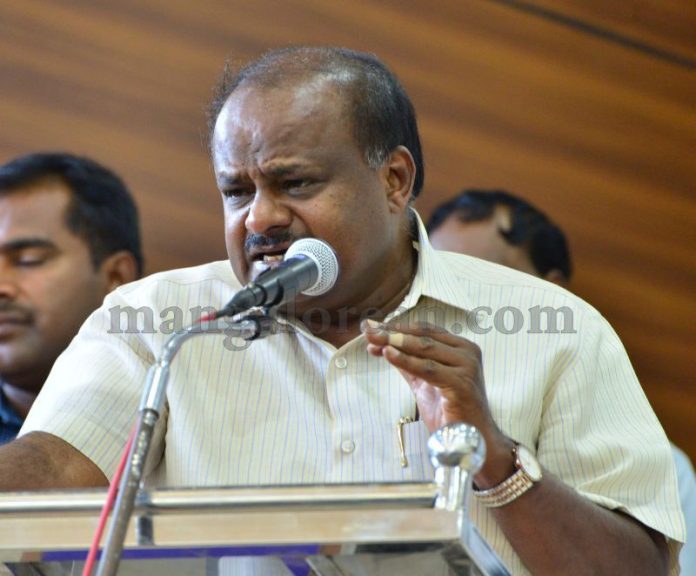 Bengaluru: Defending the entry of the two grandsons of former prime minister HD Deve Gowda into politics, Chief Minister HD Kumaraswamy said dynasty politics prevailed not only in Karnataka but also in Tamil Nadu, Maharashtra, Uttar Pradesh, Bihar and many other states.

Addressing a public meeting in Mandya where his son Nikhil Kumaraswamy was announced as the Janata Dal (Secular) candidate for Mandya, the Chief Minister admitted that there was widespread criticism of his family for giving poll tickets to Prajwal Revanna, son of Public Works Minister HD Revanna for Hassan and Nikhil. But the purpose of bringing Nikhil into politics was to wipe the tears of the people of Mandya, he said adding that Nikhil had been advised not to forget people of the district.

The Chief Minister also said that he had undergone open-heart surgery twice but his health was not important for him since he had dedicated his life for the people.

As per an astrologer’s advice, ministers Puttuaraju and Thammanna announce Nikhil’s candidature even before party supremo Deve Gowda and Kumaraswamy reached Mandya.

He recalled his long association with former minister late M.H Ambareesh and said that he would not differentiate between Abhishek Gowda, son of Ambareesh and his son Nikhil.

Ambareesh’s house was under renovation when he passed away and the family was confused where to shift the body from the hospital. At that time, officials were instructed to clean the house immediately and arrangements were made for taking the body from Bengaluru to Mandya.

“Ambareesh was like my elder brother but now people say I did it all for political gain. I was in Mandya as a fan of the late actor, not as the Chief Minister,” he added.

As per the advice of an astrologer, ministers CS Puttaraju and DC Thammanna announced that Nikhil would be Janata Dal (Secular) candidate for Mandya LS constituency ar around 11 am even before party supremo Deve Gowda and Mr Kumaraswamy could reach Mandya.