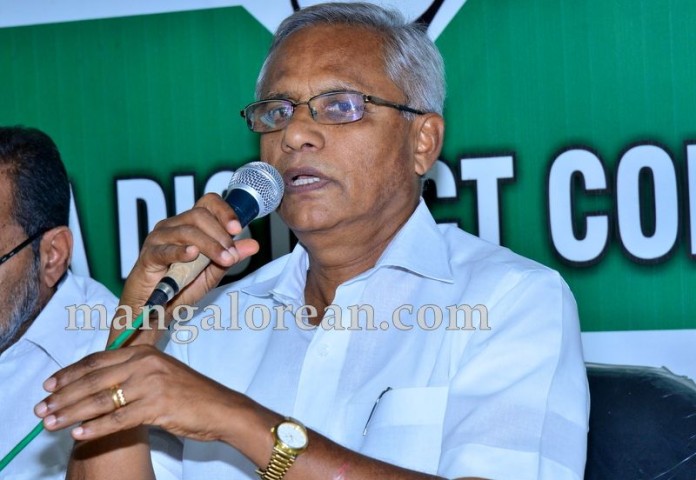 DySP Ganapathi did not give Dying Statement – MLA Lobo

Addressing the mediapersons, Lobo said that the state government is doing a lot of development and is successful in providing justice to people from all walks of life. “The Congress party is doing a lot of good work without going after publicity which is an inherited defect.”

Lobo also said, “Media representatives have followed the TV channel’s statement but have failed to observe that DySP did not mention anywhere that K J George is responsible for his suicide. The anchor had asked the names and put them in Ganapathi’s mouth. Dying declaration means a statement being given by a person who is on the deathbed, in the last stages of his life. The DySP was not on a deathbed. He was perfect and went to the TV channel to give an interview. There was a gap between the interview and the suicide. No one knows what happened after the interview. A person can change his mind anytime. The suicide case should be thoroughly investigated. If everyone will point fingers at politicians and blame them, it is not possible to run the administration. If a person has a grudge against many people and tells their names, it is not possible to file FIR on everyone.”

“Any person who works for the government cannot blame the government. Officers should not be biased. The opposition party is taking this suicide case as a weapon and not allowing the house to function.”

When asked about the response from the government and the statement, Lobo said that the suicide case should not be compared with other incidents. “When there is pressure from higher ups, it is in my hands and depends on how I handle it. There are restrictions in the administration. Whatever Ganapathi has said cannot be automatically considered as the truth. Without any investigation, the opposition party is forcing the government to hang a person!”

Replying to a question as to why George is still in his post when there is an allegation, Lobo replied, “If anyone puts an allegation on some officer, should the officer sit at home till the investigation is complete? No, the case should be investigated before anyone is accused.”

When asked if the church attack incident was the main reason for the DySP’s suicide, Lobo replied that many rumors are being spread regarding this case. “Everyone is now spreading rumours. How Ganapathi handled the situations in his life was in his hands. I suggest counselling for police officers to deal with depression or any other problems.”

He also said, “The Anupama case is entirely different. Kallappa case is also different. Anupama has violated all the normal official codes being a government officer.”

Isn’t this guy something? Those who voted for this guy should be very proud.

How can a man who commits suicide give a dying statement?