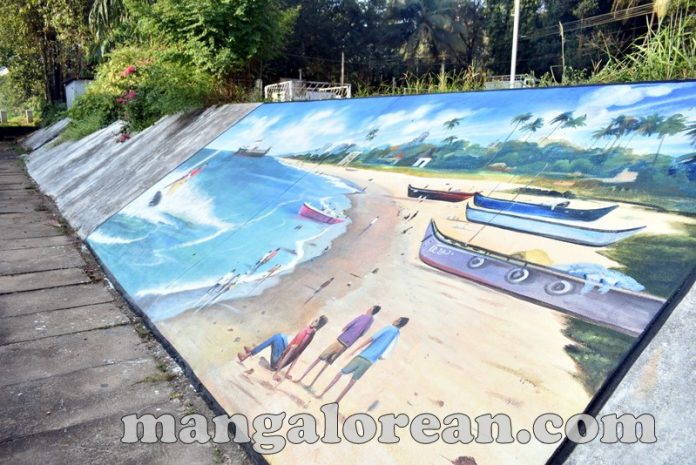 Mangaluru: The idea to turn few railway stations in India into open-air, public-art museums so that there is greater awareness among people regarding their destinations and what they have as the natural heritage of the country, has now been spread to all railway stations, even in Mangaluru. Thus, what started as a one-off, local enterprise soon morphed into a pan-India project as the ministry encouraged its 68 railways divisions across the country to paint their stations and their surroundings with traditional and cultural artwork. In many railway stations across India, the toilets, walls, the circulating areas, everything has been covered in paintings of cultural art.

Seems like Indian Railways has just woken up to the possibility of integrating its public spaces with art. It is learnt that not all stations could qualify because the key criterion was large-scale painting with emphasis on local art. The Indian Railways has rarely been associated with public art, but not anymore. Apart from being a major step by the Railways to showcase local art forms and culture, the stations also get beautified in the process, when the walls and surroundings are painted. Today, every DRM dedicates time and resources to spruce up stations through local art. It’s a wonderful way of helping local art reach the public through public spaces.

At present, one of the wall in the parking area of Mangalore Central Railway Station has a painting of “Seashore” painted by the students of Kendriya Vidyalaya, Mangaluru. Kishan Kumar Bangera, the Deputy Station Manager (Commercial) and a great friend of Team Mangalorean speaking to Mangalorean.com said, “Regarding the paintings, first we will collect a sketch of the painting from local artists or students of institutions. We will then scrutinize them, since we don’t want any controversial images in our premises. The approved paintings then only will be painted on the walls. We will also consider in painting the walls inside the building, apart from the wall outside with traditional and cultural paintings”.

He further said, “We will be looking for interested local artists and institution students to come forward and take up this artwork. We will provide the required materials needed for paintings, and the artists/students will be incorporated on the paintings. But we will not encourage any advertisements under the paintings, only the name of the person who did the art. Not just Mangaluru, the Palakkad Railway Division has taken up this initiative of painting the stations also in the premises of Palakkad, Kozhikode and Kannur Railway Stations. It is part of station beautification and also to connect passengers with local places and people”.