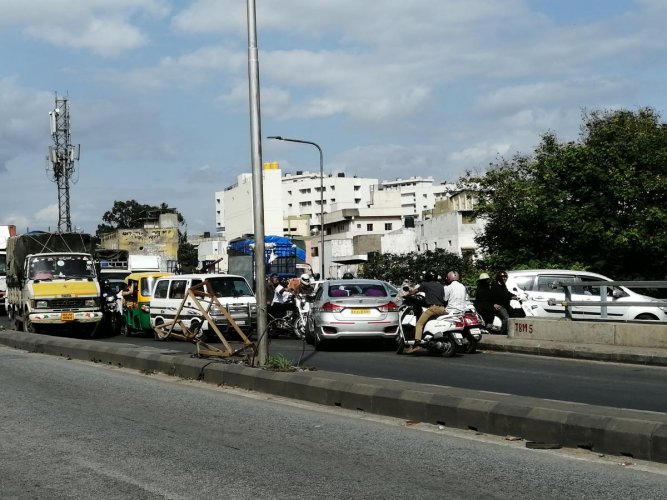 Bengaluru: The white-topping work on Mysuru Road has turned out to be a death knell for commuters of the Balagangadharanatha Swamiji flyover.

Everyday, motorists who take the flyover from Town Hall to Mysuru Road, are risking head-on collisions, though they are adhering to traffic norms as many vehicles, including four-wheelers and HTVs, come in from the wrong direction to avoid traffic snarls near the Nalanda Theatre junction.

Anticipating the big traffic lineup near the junction, a few commuters take a U-turn and return towards the Chamrajpet exit, which has become a threat to those who follow traffic norms.

To top it, motorists will obstruct traffic movement near the Chamrajpet exit, which again creates traffic congestion on the flyover.

Though the commuters brought this to the notice of the jurisdictional police, nothing has transpired. “The traffic police will be busy with routine checks near St Teresa’s School. Why don’t they catch the traffic offenders red-handed?” asked Sumith, who regularly takes the flyover.

Sumith added that there were at least three minor accidents reported on the flyover because of vehicles moving in the wrong direction, in the past one week alone. “Autos, cabs and even private cars do this. If policemen are deputed on the flyover, this can be regulated. When people are well aware of the white-topping and possible traffic snarls, why should they take the road?” he questioned.

Suraksha Trimurthy, another commuter, whose vehicle’s headlight was damaged due to a head-on collision with a vehicle approaching from the wrong direction, blamed the police for failing to regulate erring vehicles on the road.

“One motorist came in the wrong direction and damaged the headlight of my car. When I questioned him, he cleverly escaped. Later, when I brought this to the notice of the traffic police, they were negligent. I think until a major accident occurs, the police will not understand the seriousness of the issue,” she said.

P Harishekaran, Additional Commissioner of Police (Traffic), when asked about the issue, said he would visit the spot.

“People must use their common sense. However, I will visit the spot. I will also ask the jurisdictional police to look into the matter,” he told DH.