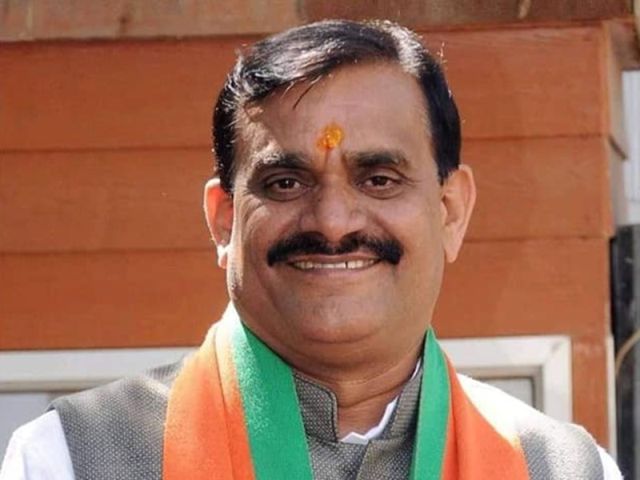 Bhopal: The BJP turned its new Madhya Pradesh President Vishnu Dutt Sharma’s assumption of charge into an aggressive show of strength on Monday. Sharma, who arrived from Delhi by train, was taken from the railway station to the BJP office in a long procession that took an hour to cover the half km distance.

Former Chief Minister Babulal Gaur’s daughter-in-law and MLA Krishna Gaur accompanied him from the station to the party office in the open jeep. Babulal Gaur had refused to recognise Sharma when his name was floated to contest the Lok Sabha election from Bhopal.

All the leaders who had opposed Sharma’s candidature from Bhopal wanted to be see with him during the procession. It was a spectacle that showed how new equations were sought to be presented from the word go. Sharma was backed by the RSS and yet had to move to Khajuraho as the candidate due to growing resistance within the party in Bhopal.

His acceptance speech gave a hint of the aggression Sharma would want to instil into the organisation. He said the state seems to have reverted to the days of former Chief Minister Digvijaya Singh. “There is no challenge before the BJP. We will work with team spirit. The BJP organisation has seen stalwarts like Kushabhau Thackeray, Rajmata Vijayaraje Scindia, Atal Bihari Vajpayee and Kailash Joshi guide the organisation. The workers will give the ruling party a tough time and overcome all challenges,” Sharma said.

The new President has the challenge of galvanising the party ahead of two by-elections, civic and panchayat elections within three months of taking charge.

Sharma’s posturing should nudge the Congress that has been procrastinating over the appointment for over a year. Chief Minister Kamal Nath holds the charge of the PCC chief too. With supporters of former Union Minister Jyotiraditya Scindia getting restive and frequent clashes between the two senior leaders becoming a public spectacle, the party might seek an early end to uncertainty in the matter.