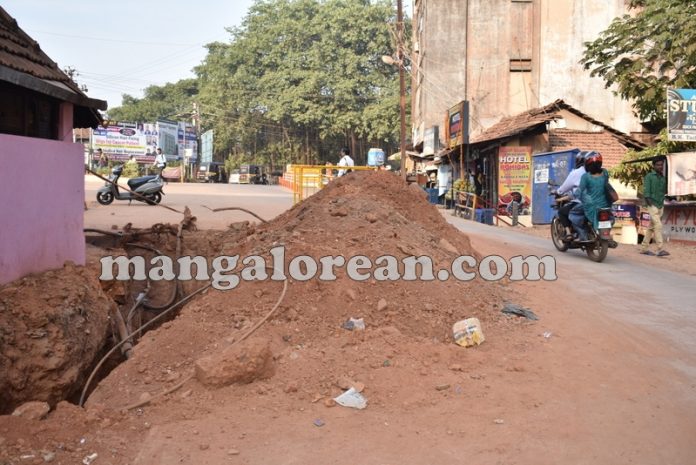 Mangaluru: When it comes to “BAD PLANNING” in the World, Mangaluru City Corporation could be entered into the ‘Guinness Book of World Records’? And one thing for sure, you might have noticed and will agree with me is that-Digging of roads/streets/bye-lanes/foot paths will never stop in Mangaluru no matter what- and we have seen it in the past and will see it in future too. Mescom, Telephone Co’s, Contractors, building owners etc- they all dig the roads/streets, footpaths without prior permission from Mangaluru City Corporation. There is no end to this- and once they dig, and after their work is done, they leave the dug up area in a shabby condition. And no action is taken against them, either by the MCC or District Administration. And here is yet another newly concreted road “Old Kankanady Pumpwell Road” near Father Hospital Hospital, which joins Kankanady Junction to Pumpwell, and vice versa.

Just a few months ago the whole stretch of the road was concreted, since it was in a dilapidated condition- and rectifying that road was very much needed. The road was closed for over a month, and all the businesses and residents located on this stretch of the road had to bear with all the inconveniences, due to the slow pace of work. But finally, everyone was happy that they all have a nice concreted road. But alas, couple of months later, the same concreted is closed again, only two-wheelers can manage to wade through all the mess, and other vehicles.

The closure of this stretch of the road is that the sides of the newly concreted road has been dug and the mud has been piled on the road, and thus no traffic could be allowed to ply. But why wasn’t the laying of the new water pipeline was not planned, when they knew that it was needed, well before the road construction was started. Not that digging of the new concrete road is needed for this project, but all the mud that is dug and dumped on the new road will ruin the road-and chances are that when the side of the new road is dug, there could be damages to the concrete, without any doubts.

But did the engineer,contractor or the concerned “Smart ?” officials from the Smart City ever think of this? Bet, absolutely not! Now once again, businesses on this stretch of the road have to bear the brunt, and suffer all the income loss due to some one’s careless planning and negligence. Bah humbug! For a City which has been selected as one of the “Smart City” of India, however, it seems like we are lacking “Smart People”, right from MCC Officials, Engineers, Contractors, and other District authorities who are simply wasting tax payers hard earned money on projects, which once completed have to be re-done or new roads have to be dug up to lay drainage or construct new manholes or address some water problems.

I am not lying, just look at the sad situation of this newly constructed concrete which was done just a couple months ago- now due to a poor planning when the road construction was carried on and now completed- now they are digging the sides of the road to lay a new water pipeline. Why wasn’t the construction of the new water pipeline before the road was being re-constructed, is the question that many citizens would ask- but getting the right answer from the concerned authorities will be a tough one. The reason, they know that they screwed up, BIG TIME?

I am not against the laying of the new water pipeline, because of the vast numbers of apartments/commercial complexes etc mushrooming in the Smart City, bigger and better water pipelines are needed to cater to the needs of the citizens. But proper planning should be done before any such projects are taken up. If you look at all the newly constructed roads in the City, they are dug up after they are completed either for drainage pipe works, manholes etc. And this creates lot of inconveniences to the motorists to move around these dug up sites.

But it seems like no one cares about it- new roads are constructed, and within the next few hours or few days they are broken to give way for a new project/work. This education hub is now like a middle aged bachelor,with the government and MCC trying to dress him up with all sorts of cosmetics while the vital aspects are being sidelined. With half the city being dug up for one or the other reason the traffic appear to be going haywire while the pedestrians are scampering for safety. Mangaluru has a dubious reputation for being the most unsafe city for pedestrians. Nobody has investigated into that, so there is no official document available for gouging the level of discomfort for the pedestrian but the way the city is dug up at present it is evident to the naked eye the violation of safety of pedestrians.

School children, young and old folks, ladies and gentlemen are the most susceptible. They come onto the road to escape the dug up areas endangering their safety. It is a carnage out there. With the roads dug up here in there, some could claim that they have sent people to the hospital with injuries, some others would state that they have claimed lives! Even today, when there is so much conversation about road safety, and despite pedestrians being at the fore of this conversation, many roads are not safe either due to construction or debris left after construction. Not “Smart” for a upcoming “Smart City?”