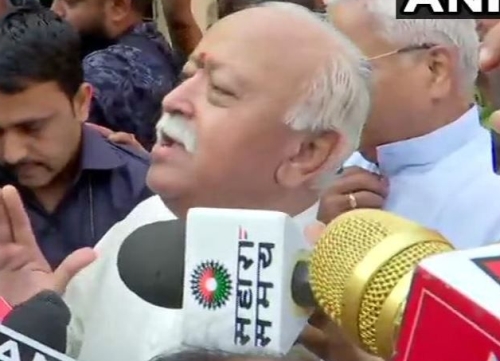 New Delhi: Rashtriya Swayamsevak Sangh (RSS) chief Mohan Bhagwat took a veiled dig at the anti-CAA protests across the country, without naming any one. Bhagwat questioned who will take responsibility if a protest goes awry, unlike Mahatma Gandhi who atoned for the mistakes when something went wrong in a protest.

“If something went wrong during an agitation, Bapu made amends to it. Mahatma Gandhi atoned for mistakes during experiments with agitations. These days, if such a thing happens, if the law and order breaks down, if people face lathi charge or bullets, it’s the protesters who suffer but the brains behind them simply claim victory or defeat),” Bhagwat said.

While there was no reference to Shaheen Bagh or Jamia Millia Islamia agitation, but the reference to lathi charge and law and order breakdown was widely perceived as an apparent dig at anti-CAA stirs taking place around the country.

Protesters have blocked the road no 13A at Shaheen Bagh for two months now demanding a rollback of the contentious Citizenship Amendment Act. In Jamia, protesters went berserk on December 15 last year when buses were torched and cars ransacked following which Delhi police launched a crackdown on students. Jamia coordination committee claimed the students who were lathi charged were ‘innocent’. Bhagwat’s reference was an apparent remark on those he referred to as “karaaney waaley” (the instigators).

Bhagwat was speaking at a book launch event in New Delhi on Monday.