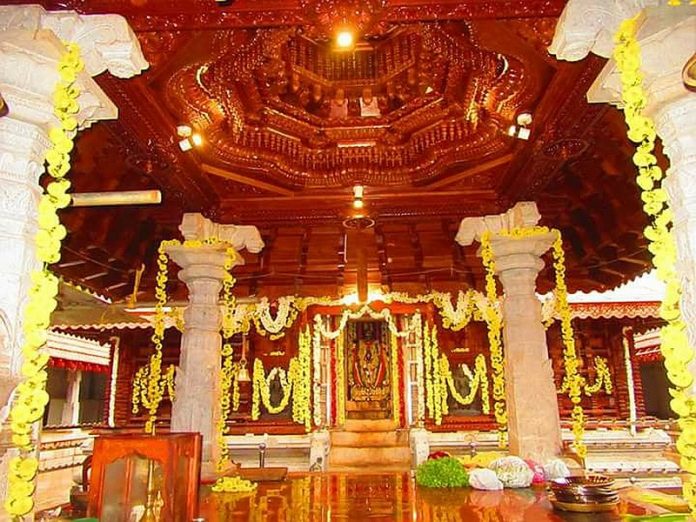 Seeking Solace in the Divine Abode

One will rarely miss the enchanting pulse of divinity inside this classy temple. Its magnificent sculpture, soothing calmness which prevails through the vicinity, the positive energy emanating from the sound of sacred bells… welcome to the 600-odd-year-old Sri Anantha Padmanabha Temple in Hebri, a bustling mini town situated 33 kilometres from Udupi, the district headquarters which is acclaimed as the temple town of South India.

Amidst the Bustling town

Located on the foothills of Agumbe Ghats, Hebri is a prominent junction situated ideally at equidistance from major towns of coastal Karnataka and Malnad region. 35 km from Udupi, 33 km from Karkala, 45 km from Kundapura, 47 km from Sringeri and 50 km from Thirthahalli makes Hebri one of the vital convergence points where pilgrims and tourists throng to take a dip in the splendour of nature and plan their journey ahead. Over the past decade, Hebri has emerged as a crucial business hub, thanks to the steady growth of agro-based industries and eco-tourism.

Legend has it that this tiny hamlet of yesteryears got its name from a mammoth drum- known as Bheri- which alerted people during calamities and sudden attacks from the enemy. Hebberi- the gigantic drum- had its sound reverberated across far-flung villages too, thus playing the role of a saviour in times of distress. In modern times, Hebri, officially declared as taluk just last month has 16 village panchayats under its fold.

Placed on the main road of Agumbe-Malpe route which boasts of some of the most beautiful natural and water landscapes of the region, Sri Anantha Padmanabha Temple accommodates the shrines of Kshetrapala, Khadaga Ravana and Dhoomavathi. Lord Anantha Padmanabha is the main deity of the temple and his idol, a beautiful black granite sculpture in the standing posture, is three feet in height. The Jois family has been worshipping the Lord for over three centuries now.

The year 2017 was remarkable in the history of Hebri as well as for this temple. The Garbhagudi, Thirtha Mantapa, Suttu Pouli (front) and the major portion of the temple received an extensive facelift, the revival giving its devotees a lot to cheer about. Brahma Kalashotsava, Punar Pratishtapana (re-installation) and Annual fair were held with unprecedented devotion, grandeur and zeal from March 30 to April 10 last year. The residents of the town and nearby villages contributed their might in ensuring that their deity sits in his noble position and protects the doting followers with his immense power.

According to Nagaraj Jois, a descendant of the Archaka family of the temple, there is no convincing evidence as to who built the temple and when. However, the task of preserving and managing the holy shrine came from the Jain rulers to the Beedu Ballal family, considered to be the most powerful clan in coastal districts and it has continued till date. The legacy moves on.

The annual fair of Hebri – the enraptured as well as fascinating Rathotsava- is a grand celebration, bringing together hundreds of thousands of people from far and near. The atmosphere is always filled with fun, frolic, gaiety and devotion. The fair is held in the premises of Sri Anantha Padmanabha temple and countless stalls and shops appear on the ground adjacent to the temple. A sea of humanity, breaking the walls of caste, creed and religion, visits the cultural and traditional extravaganza coming alive on these four days. After all, when faith in your lord is firm and resolute, life becomes an eternal celebration.