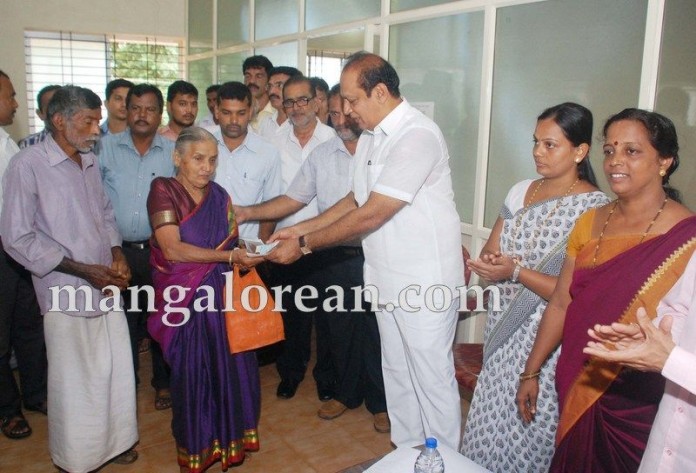 Udupi: Former Minister and Kaup constituency MLA, Vinay Kumar Sorake distributed financial relief worth Rs 36.2 lakh to 141 victims who lost their houses in a wind storm that affected Bommarbettu, Perdoor and Bellarpady. In a programme organised at his office at Hiriadka here on July 7, Vinay Kumar Sorake said that the windstorm that affected three villages had ruined the lives of people.

The relief has been sanctioned for the houses which were totally and partially damaged. The 1.5-month-old child, Arjun who had sustained injuries during the windstorm is recovering. Hospital authorities have been directed to take appropriate measures.

Sadhu Kulal, who assisted in clearing the trees which were uprooted due to the windstorm, had been severely injured. He was admitted to KMC Hospital. 10 loads of tiles were distributed to fix the damaged houses. The government will provide every possible assistance to the victims, assured Sorake.

Officials have initiated steps in building records and executing payments. Usually the distribution of relief and financial assistance is a lengthy process but in this case, the relief has been distributed within a week. The victims who have lost their houses will be provided with new houses constructed under the Indira and Basava Housing schemes. 52 new houses will be built under these schemes. The Executive Officer of Udupi Taluk Panchayat was also directed to initiate steps to construct new houses. The report furnished by the Tahsildar will be submitted to the Chief Minister for the release of funds from the CM’s Fund.

Sorake also said that in regard to the crops that were damaged in the three villages, a consultation is on with the horticultural department to release financial relief. “The victims need not fear. The government is with them and will help them. We will address your issues and initiate all the necessary step for your welfare,” he added.