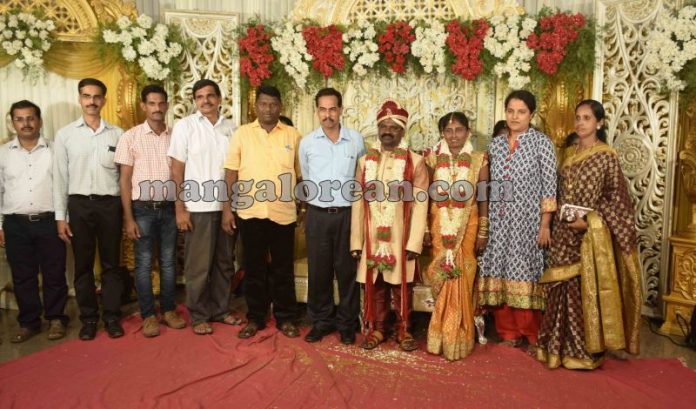 Udupi: As an initiative to make Udupi a garbage-free district Under the Swacch Udupi Mission by Priyanka Mary Francis, Deputy Commissioner Udupi district, on Sunday, September 3, the district witnessed the first Green protocol wedding at Uchila.

The campaign of the District Swacch Mission and the district administration to promote the green protocol concept received a major boost when a wedding ceremony and reception were held strictly adhering to the protocol.

The Bridegroom Sudhakar, the member of Navachethana Yuvaka Mandala Kattegudde and bride Harinakshi become a model for future wedding receptions in the district to adhere to the green protocol.

In tune with the decision, water and juice were served in steel glasses and the meals in plates by Deekshith Shetty Excellent caterers Ambagilu Udupi. No plastic or thermocol materials were used for decoration. Instead, only natural flowers and eco-friendly items like cloth were used.

Speaking on the occasion Deputy Commissioner Priyanka Mary said that the district administration has come up with the unique task wherein the district would be ensured as garbage-free by October 2, 2018, through increasing the garbage value and transforming every bit of garbage into productivity. The members of all youth associations had received training in the scientific management of solid and liquid waste. They should now become soldiers in the Swacch Udupi Mission. They should work sincerely in this drive.

The wedding of Sudhakar and Harinakshi goes as a model for future wedding receptions in the district to adhere to the green protocol. The district administration will felicitate them with appreciation certificates and also those who host their weddings by adopting the green protocol, she added.