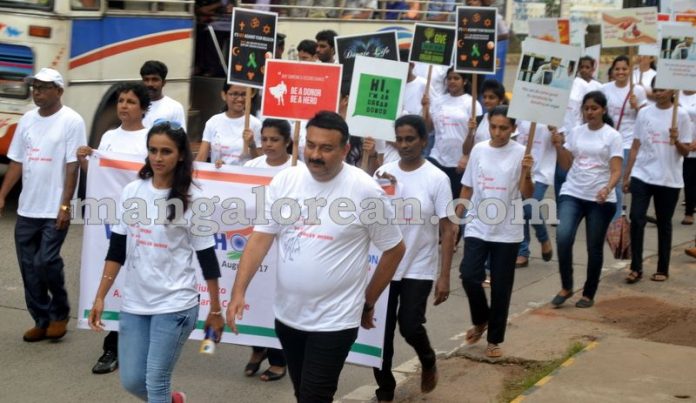 The Freedom To Live Beyond! AJ Hospital mark I-Day with ‘Walkathon 2017’

Mangaluru: No doubt it was indeed a perfect early morning weather on Tuesday, 15 August 2017 to kick off “Walkathon 2017” to bring awareness about Organ Donation along with a celebration of country’s 71st Independence Day. The Walk saw the participation of hundreds of AJ Hospital staff and faculty, which commenced from Mangala Stadium-Mangaluru and culminated at AJ Hospital Campus- Kuntikan, Mangaluru. The Walkathon 2017 was flagged off by Zilla Panchayat CEO Dr M R Ravi, joined by “Mrs Popular-Haute Monde Mrs World India” winner Kudla Mom Soujanya Hegde; Dr Prashanth Marla- ‎Medical Director & CEO at A J Hospital & Research Centre, among other VIPs.

When we die, what’s left of our mortal being is either put to the ground or burned to ashes. Meanwhile, a score of patients lay in hospital beds waiting for organ transplants, and dying a slow death as viable organs get wasted. The concept of organ donation has been around for quite some time, yet, the number of willing donors barely catch up with the demand for organs. One of the many reasons for this is the prevalent lack of knowledge among people. So, on the occasion of India’s 71st Freedom (I-Day) AJ Hospital in order to bring awareness and a few pointers that citizens should know about organ donation, organized ‘Walkathon 2017’.

Addressing the gathering prior to the flag off, Dr M R Ravi said, ” Lack of awareness about organ donation triggers wastage of viable organs in our country; Even those willing to donate often fail to record their wish the right way due to their lack of knowledge regarding registering for organ donation; Various myths and misconceptions about organ donation discourage both potential donors and recipients. Beliefs such as being haunted by the donor’s spirit, and donors not “finding peace” after death, have only been fuelled further by numerous lame movies; The shortage of organ donors also causes the demand for illegal organs in the black market to up, which only leads to more botched surgeries, clueless donors, and more deaths. Organ Donation is a noble gesture-it enables you to live beyond your life time while giving life to the critically ill patient. This campaign undertaken by AJ Hospital will go a long way in bringing awareness on this issue, wherein we could see more organ donors come forward to donate organs”

Dr Prashanth Marla speaking said, “Organ donation, as the name suggests, is the process of surgically transferring a willing donor’s healthy and transferable organs or tissues to another person. Certain organ donations — such as one of the kidneys, a part of the liver, bone marrow, etc.– can be donated by a living donor. Donations of organs like heart or intestines take place only after the donor’s death. Almost everything. Human organs such as heart, lungs, liver, kidneys, intestines, corneas, bone marrow, even skin and limbs in certain cases, can be successfully transplanted into patients in need. With healthy transplanted organs, a patient can survive for years, even, decades. About 90 per cent of patients in need of vital organ transplants in India die while waiting for the organs due to lack of donors. In this respect, AJ Hospital has been working hard to enroll as many organ donors through various awareness projects, including today’s “Walkathon 2017″, to spread the word of Organ Donation in the city.”

Soujanya Hegde expressing her thoughts said, ” We should all join in this campaign organized by AJ Hospital to spread awareness about the life-saving mission. You never know, someone out there may need your organ for him or her to survive- so donating your organ could bring in a new life to a person. There’s Always a Part of You that Wants to Help People. Give it the Chance When the Time Comes. Through this campaign we have to go a long way to bring awareness among the public on organ donation. We can do it- and I am really overwhelmed with this campaign organized by AJ Hospital which had received great support and encouragement, and I am sure will be of great help to those who are in need of organs.”

The walk which started from Mangala Stadium proceeded towards Lady Hill, Lalbagh Road, Bejai Rd….. culminating at AJ hospital campus, where all walkers united in the spirit of Independence Day Celebrations and with a feeling of satisfaction of being part of the bigger cause of organ donation drive in Mangaluru. Think of it this way: your organs after your death could either rot in the ground/ burn into ashes, or save some one’s life. It’s your choice. Be a Hero-Be an Organ Donor!