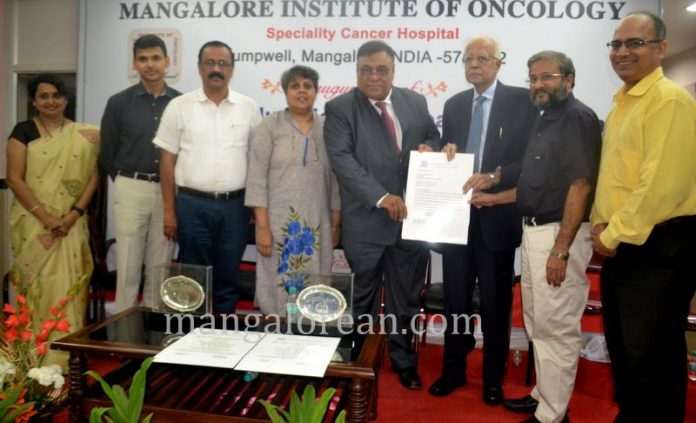 Bioethics is the study of the ethical issues emerging from advances in biology and medicine. It is also moral discernment as it relates to medical policy and practice. Bioethicists are concerned with the ethical questions that arise in the relationships among life sciences, biotechnology, medicine, politics, law, and philosophy. It includes the study of values (“the ethics of the ordinary”) relating to primary care and other branches of medicine. The objective of the MIO Bioethics Units will be to initiate and carry research on India specific issues in Bioethics and in cancer in particular. The other goal of the unit will be to spread the ethical aspects to the health care students and professionals. It also aims at integration of the ancient ethical values with the current norms in health care.

Addressing the audience, Professor Dr Russell Franco D’Souza said, ” The goal of this training platform will be to improve the knowledge and skills in conducting ethical research and in review of research protocols from ethics point of view as well as advising researchers and research managers on the ethics of research. It will also contribute in substantive and procedural aspects of research ethics, development of ethics in health research, and evolution of ethics guidelines; Ethics principles, their theoretical roots and applications; Ethical issues in health research and skills to deal with them; Ethics principles and values mediating through social structures and cultures; Relationship among morality, ethics, law, and rights; Ethics review mechanisms and related matters.”

“Presently we are going through a turbulent time in the area of clinical research; there is a strengthening of regulatory scenario resulting in delay in various regulatory sanctions. Ethics is one of the areas which was seen the highest degree of restructuring and refinement in terms of compulsory registrations, new regulations for formation of ethics committee and compensation issues. This exercise has brought in several changes in the functioning of ethics committees around the world, including India. An unmet need was to train and empower the existing as well as newly formed committee members so that they can act responsibly keeping a conducive research environment.” added Dr Russel.

Also speaking during the occasion, Dr Ananthakrishna said, ” I am pleased that the launch of Bioethics Unit here at MIO, it will now be even more active with its lead role towards coordinating and stimulating an network of Institutes for Medical Ethics Training and work towards contributing and developing an up-to-date syllabus for medical ethics education for health care facilities..The advancement in medical technology has raised concerns on its implementation and negative potentials. There is the need to address the concerns through proactive engagement in understanding the universal importance of bioethics, human rights.”

” With the inclusion of Bioethics at MIO it can address the vast gaps between theory and practises in teaching Bioethics in all aspects of biological sciences, nursing, medical sciences and allied health sciences. Such a contributory role reinforces the educational excellence of MIO in creating new knowledge, disseminating the knowledge and applying the knowledge for the benefit of mankind. I wish to thank Prof Dr Russell D’Souza for the recognition of MIO’s strength and the opportunity to support UNESCO’s Bioethics network” added Dr Ananthakrishna.

Dr Mary Mathew also highlighted the importance of having Bioethics in a health care facility, which will benefit the organization. Dr Suresh Rao and Dr M S Baliga also spoke related to Bioethics. The vote of thanks was proposed by Dr Y Sanath Hegde, while the programme was compered by Ms Kavitha Sanil- a MIO office staff.