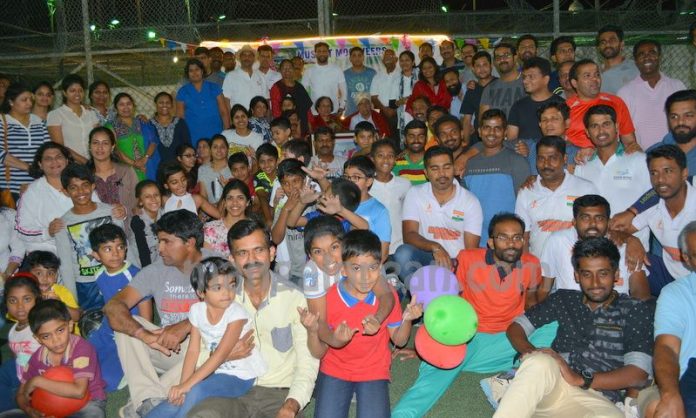 Oman: Muscat Mogaveera Koota (MMK) successfully organized its annual sports day for its members and their families on Friday, April 14 at the Muscat Sports Club, Wadi Kabir under the leadership and guidance of President Srinivas Shriyanand with the meticulous planning of Committee members.

MMK’s honorary President Dr Shekar Salian along with his wife Leela Salian inaugurated the event by cutting the ribbon in the presence of Committee members and hundreds of sports enthusiasts. Vice President Koni Prakash Naik welcomed the members and along with Shesh Kanchan and Vishwanath Bangera efficiently conducted the entire proceedings of the event.

MMK Sports Day was an evening/night event that lifted the sporting spirit of the community, that displayed the strength in unity and once again kindled the feeling of oneness within the community. While facilitating healthy, active living to its members, it was also an opportunity to“GET OUT & GET ACTIVE”! It was a great day filled with fun and frolic for MMK families. The Committee did not leave any stone unturned to ensure all-round entertainment and non-stop action throughout the evening for all participants.

MMK has been organizing several cultural and sports events (indoor and outdoor) for its members for the past 30 years with an aim to bring all the community members under one roof so as to work for the welfare of the community. Mogaveera community is well known for their valor, unity, sincerity and integrity wherever they are.

Hundreds of community members partook in the event and displayed their talents by participating in various sports/games. Due to the summer season, the sports events were held between 5 p.m. and 12 p.m. The whole evening had an exhaustive lineup of events comprising sports and games like passing the parcel for tiny tots, running race for all age groups, shotput throw for men and ladies, throwball for ladies, volleyball for men, cricket for men, tug of war for men and ladies.

During the event, one of MMK’s founder members, Dr Shekar Salian, a prominent community leader and a respected personality in the society along with his wife Leela Salian were felicitated for their immense contribution to the community’s welfare during the past 3 decades.

At the end of the event, all the winners of various sports events were given away their winning trophies by some of the Executive / Advisory Committee Members and Guests of Honour. A raffle draw was also conducted for which prizes were sponsored by Prakash Naik.

MMK Committee thanks all those who were instrumental to the success of the Sports Day. Kudos to MMK Committee and all members for the resounding success.