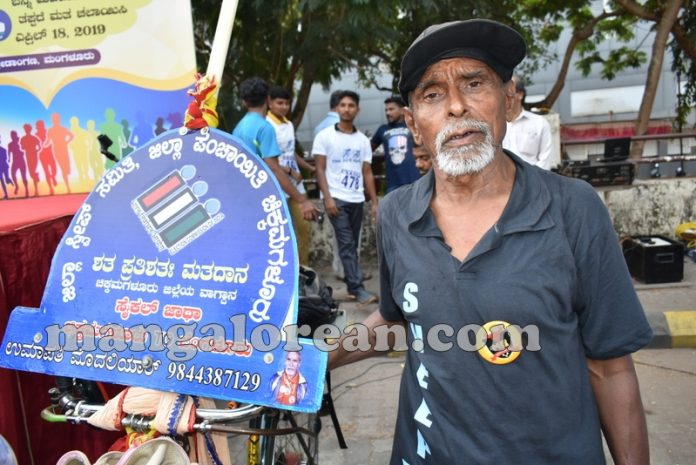 Mangaluru: Following close on its heels, where Team Mangalorean had published an article “Man on a Mission Quits 40k Salary Job to bring Awareness on LS Election Riding his Bike” on 22 March, featuring 43-year-old man, Basavaraj S Kallusakkare, chief convenor of Samartha Kannadigaru, a Bengaluru-based organisation, riding his motorcycle on a 22 district tour as part of his journey/mission in bringing awareness on the importance of voting in the upcoming Lok Sabha elections had made a pit-stop in Mangaluru- and now we have yet another Cyclist, 73 year-old Umapathi Modaliar who is also on a mission spreading the message on importance of voting, and also few other issues, like Cow Slaughter ban, H1N1, Swachh Bharath/Karnataka, HIV Aids, Ban on Alcohol, etc.

“Cycling is my passion. If I’m tired, I stop and take rest for a few days. People are kind and help me by giving money and food for my mission. I also get accommodation in government guest houses,” said Umapathi, who until now since his cycling tour around the nation has covered over 36,866 touring 11 states in India and nearly 27 cities in Karnataka. He has visited 56050 schools throughout India and has educated children on the importance of cleanliness, hygiene, and many other topics. His current mission on bringing awareness on importance of voting began on 25 March in Chikamagaluru, and when he had made a stop in Mangaluru during the SVEEP 18-Km Marathon held on Sunday, 31 March 2019, Team Mangalorean had the opportunity to meet Umapathi and get the details of his journey and mission.

When PM Narendra Modi had launched the Swachh Bharath Abhiyan in 2014, and even as citizens had started to pick up brooms to clean their surroundings with the launch of the Swachh Bharat Mission, Umapathy in the same year decided to pedal his way to New Delhi to spread the message of ‘Swachh Karnataka, Swachh Bharat’. With a photo of Mahatma Gandhi and posters of ‘Swachh Bharat’ campaign fixed to his cycle, Umapathi Modaliar, then 69, a native of Amaragiri Malekal Tirupati in Arsikere taluk of Hassan district, launched his cycling mission- and even today, he still continuous his mission riding his bicycle to bring awareness on various issues, including importance of voting in the forthcoming LS elections.

Cycling for a cause is not new for Umapathi, who is an electrician by profession, who claims to have covered 36K plus km on his cycle during various missions between 2001 and 2018. He works for nine months and goes on cycle tours using his savings, during the other three months in a year. In 2010, he covered 3,105 km to New Delhi in 47 days. So, what makes him take up cycle tours even at his age? “I studied till class 8 and I can only speak Kannada fluently. But, I still manage to strike conversations with people in various States en route my cycle tour. It gives me immense pleasure to cycle around the country spreading awareness,” says Umapathi.

But, health problems have not deterred this elderly citizen from taking up long-distance cycling missions. “On my journey, I meet people and tell them the importance of cleanliness, voting rights and its importance, cow slaughter ban, bad effects of alcohol, corruption and many other issues ” says Umapathi, who has done cycle tours to raise awareness on such issues. On this mission, he is also demanding to link rivers Godavari and Cauvery. Riding his bicycle, which is decked with slogans highlighting the importance of not only voting but other certain issues, Umapathi visits gram panchayat offices, government schools and colleges to appeal to voters, so that 100 per cent voter turnout is ensured.

Umapathi Modaliar hails from a poor family background, having no proper roof on his head. Living in a rented house, although married, his wife has some mental problems, he had adopted a girl, and married her recently. Lacking back in other languages, other than Kannada Umapathy says he had a tough time communicating with PM, so he insists that parents should encourage their children to learn as many languages, so that they can communicate freely wherever they go. Recalling the gift of a mobile phone given to him by the then Hassan district Deputy Commissioner, Ashwathnarayana in 2006, he says at the moment the mobile phone is in bad condition, and needs replacement. “If government or any kind hearted person donates me a mobile phone it would be of great help, just like a gift of video camera which was presented to me by Delhi Kannada Sangha office bearers in 2011, in recognition for my services” pleaded Umapathy.

Umapathy recalls his First bicycle jatha kicked off on October 2, 2001 at Gandhi Bhavan Bengaluru, where his mission was creating awareness about HIV in addition to H1N1, liquor ban, cleanliness, ban on smoking etc.During one of his bicycle tour to New Delhi, he had urged the Prime Minister to link River Godavari with River Cauvery. And in 2010, he pleaded the PM to enforce cow slaughter ban, and in this regard had organized many activities pertaining to cow slaughter. Not only cycling is his hobby, Umapathy is a sportsman too, having bagged 14 gold, eight silver, and eight bronze medals at state and national level between 2008 and 2016, in 60 +, 65 + and 70 + category in the 5000 m, 1500 m, 400 m, and 200 m race events.

He had also involved in the same kind of mission during the 2014 Lok Sabha election, where he had visited various places in Hassan district, urging people to franchise their votes and not to waste it. Similarly in the forthcoming LS election, his aim is to make 100 % voting, and when he completes his tour in Bengaluru soon, he wants to meet the election commission officials and request them to allow him to speak on relevant issues haunting the society. His another request to election commission officials is to allow thousands of prisoners also to vote, which can result in transformation, and also give a chance to the patients in the hospitals to vote.

At the end of the conversation, Umapathy Modaliar said, “Believe it or not, I have in my possession about 28 kg of documentary evidences weighing about 28 kg and photographs pertaining to my journey/services/mission weighing about 10 kg. Once again I make a humble request to everyone to please vote without fail, because its your vote which counts and will make a difference”

Mangaluru: Cyclist Abhishek From UP On His Nationwide ‘Swachh Bharat’ Yatra Makes Pit Stop In City

Mangalore: Amateur Cyclist Meets A Pro! Abhishek S From UP Interacts With ‘Nobbie’ D’Souza From DK

Mangaluru: Cyclist Abhishek From UP On His Nationwide ‘Swachh Bharat’ Yatra Makes Pit Stop In City

Mangaluru: On A Mission! From ‘Fishland’ To ‘Thailand’, Kudla’s Shivprasad Shetty To Explore SE Asia On Motorbike