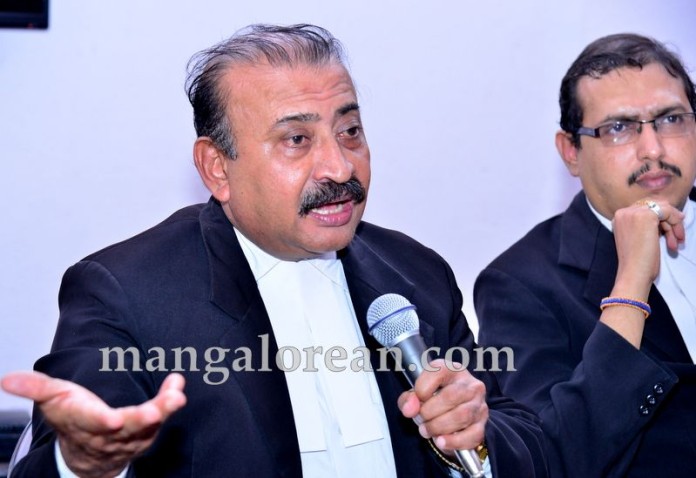 Mangaluru: The statement given by DySP Ganapathi before committing suicide is a dying declaration, said the president of the Mangalore Bar Association, Chengappa at a press meet held at the court premises here, on July 14.

Chengappa said that the state government is trying to bury the DySP suicide case. “We all know the facts and circumstances under which Ganapathi committed suicide. DySP Ganapathi had given an interview to a TV channel, where he spoke about harassment from three individuals – K J George and police officers Prasad and Mohanty. He then went to Vinayak Lodge and committed suicide. As a lawyer, my opinion is that his statement is a dying declaration due to the circumstances under which he committed suicide. A dying declaration, as defined in Section-32(1) of Indian Evidence Act, contains a lot of weight and is considered as a credible and trustworthy evidence. On the basis of the dying declaration, the police who were at the scene should have registered a FIR under Section 154. It might be an unnatural death or a suicide but when Ganapathi had given a dying declaration, the FIR must have been registered. This is an important step, but why was the FIR not filed?” he questioned.

He further said that Ganapathi’s brother was later made to give a statement “under cohesion and undue influence” that Ganapathi was in depression. Chengappa also said that two death notes and a pen drive had been found at the scene of occurrence, yet now, the death note and pen drive are missing or destroyed. This “alleged suicide” has happened under “very suspicious circumstances”, and raises many questions, he added.

“But this case is just the tip of the iceberg. There was DK Ravi’s case too. Similarly, we have heard of what happened to Anupama Shenoy and the DC of Mysuru Shikha, who was manhandled and the police are yet to nab Mari Gowda. In our own district, when Hepsibha Rani tried to make the MCC more transparent, she was transferred. All these incidents reflect the type of government that we are living under. Honest officers are not able to function in the state.”

Chengappa expressed a lack of faith in the investigations of the CID, stating, “The CID cannot elucidate any truth. They do not properly investigate a case. Their method of investigation is to ask the people who were around what had happened and collect their statements. The three who have been named should be booked under Sections 306 (abetment of suicide) and 201 (causing the disappearance of evidence) and the case should be hand over to the CBI.”

Chengappa also said that Ganapathi had revealed the harassment to him a few days before the suicide when he was in the city for a case. “He spoke about police atrocities. I told to keep faith.”

The MBA will hold a symbolic protest on July 15 at 10:30 am in the court premises. MBA secretary Raghavendra H V, treasurer Yatheesh, Rahul D’Silva and others were present at the press meet.