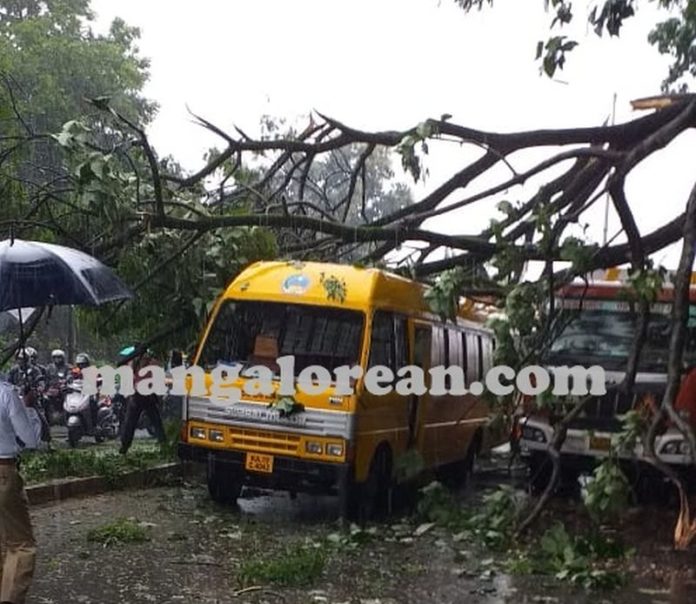 Tree Falls on School Bus near Nanthoor? Our Website had Warned about THIS Hazard Twice!

Mangaluru : If you browse through our reports on the dangerous trees that are waiting to fall and take away the lives of innocent citizens or injure others, or even do lot of damages ot motorists and vehicles, then just click on the links of our earlier reports on the same issue at the end of this report. One such report is about the safety hazard posed by a bunch of trees leaning before you reach the Nanthoor junction from Kankanady Pumpwell, on National Highway 66-the name of the report was “Caution: Leaning Trees near Nanthoor STILL Pose Danger to Commuters? “, published last year. And just recently we had published yet another report- “Tree Planting is Good, but MCC should Take Care of the Falling Old Trees FIRST?“.

Only if the concerned authorities from the District Administration or Mangaluru City Corporation had taken our report serious, and had at least trimmed the branches or chopped the tree down today’s incident would have been avoided. But luckily no one was injured in today’s accident due to the carelessness and negligence of MCC officials. One should know that MCC always waits for an accident to happen, and then only will take the necessary steps or precautions. Unless and until citizens take MCC to task, and make them liable for the damages incurred in such accidents, due to their negligence- we will be seeing many more such incidents in future. 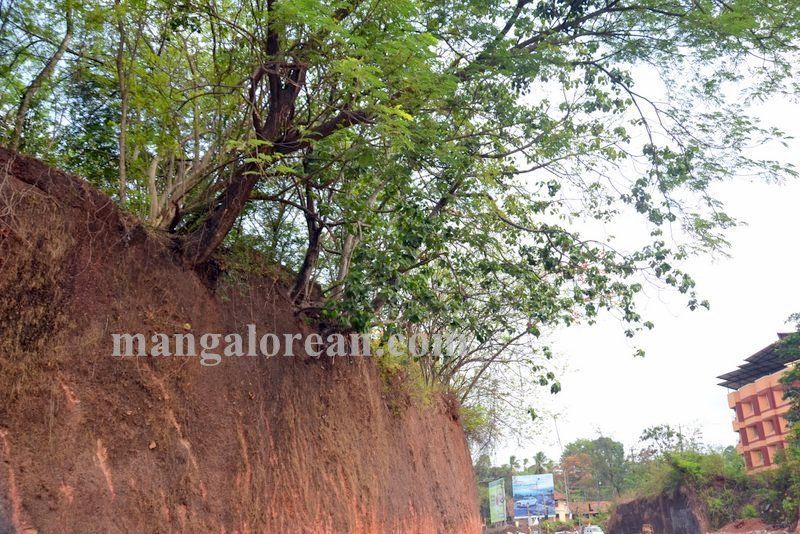 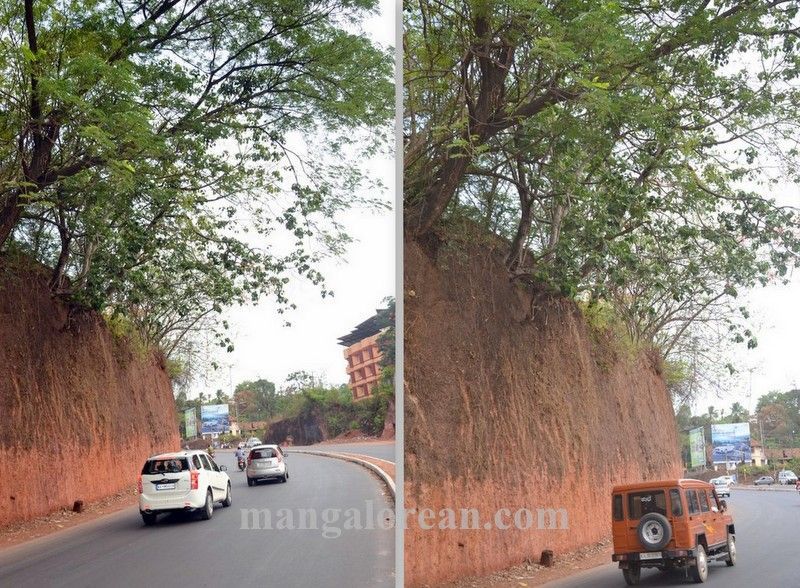 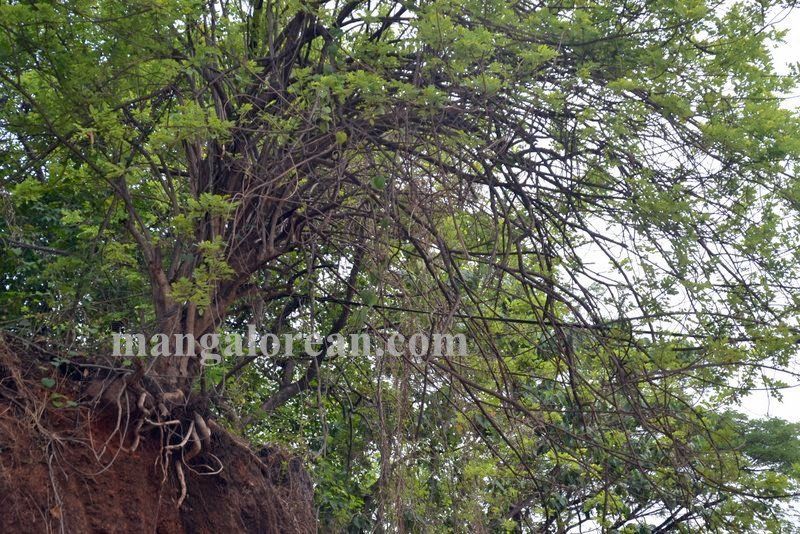 In response to today’s report School Children Miraculously saved when Huge Tree Falls on Bus at Nanthur“, the funny part is that in spite of falling tree branches and also trees getting uprooted and causing heavy damage to buildings, property, vehicles, and also injuring commuters, the district authorities/MCC Officials/Forest Department Authorities have not taken any action in trimming branches or chopping down old hazardous trees- and due to that we are seeing such tragic incidents every now and then in the City. In the past few days, after the city was lashed with torrential rains, with gusty winds, there have been quite a few incidents of trees being uprooted or branches landing on building/homes, vehicles and people. While Environmentalists and Forest Department Officials are quick enough to be at the spot to stop trimming or cutting hazardous trees, but when these trees come crashing down on vehicles, houses, walls etc, during that time you’ll not find any of the environmental activists nor forest dept officials, other than police and fire department personnel. Why? Because they are guilty!

Once again after Mangaluru had seen quite a few fallen trees creating huge losses to property in the past, today’s incident is yet another example, which took place with the falling of the tree near Nanthoor. Even though the tree fell on a moving school bus, luckily there were no injuries or no heavy damage to the bus. The first ones to arrive at the scene were the fire brigade personnel, followed by the police after a while. So coming to the point, lately while scores of old trees have fallen all over the city following strong gales, resulting in damages to vehicles and property, why haven’t the concerned authorities taken any precautionary measures. 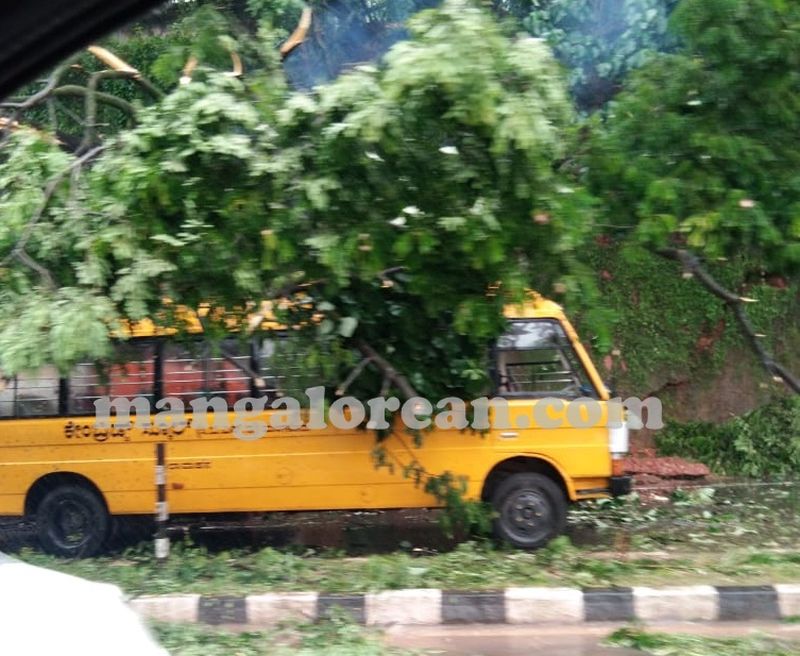 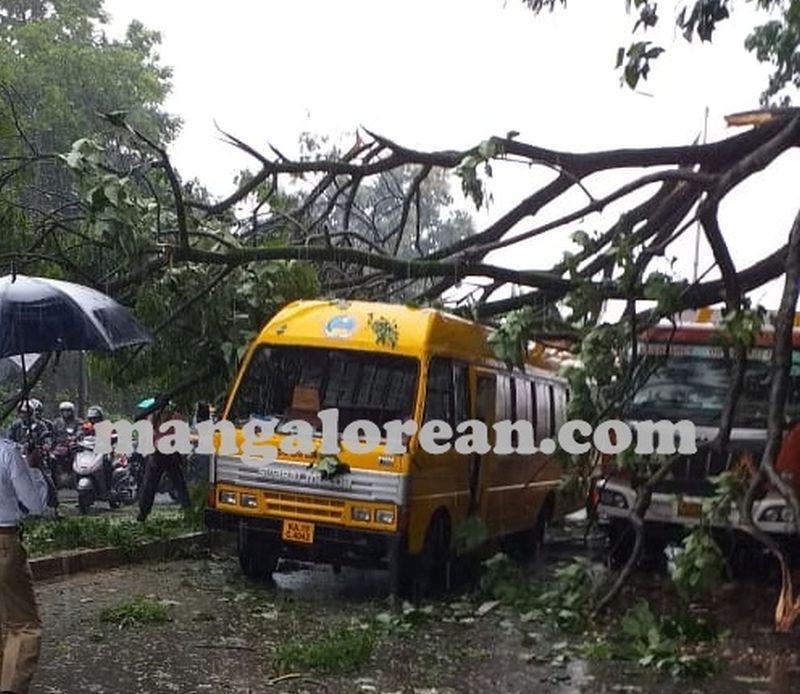 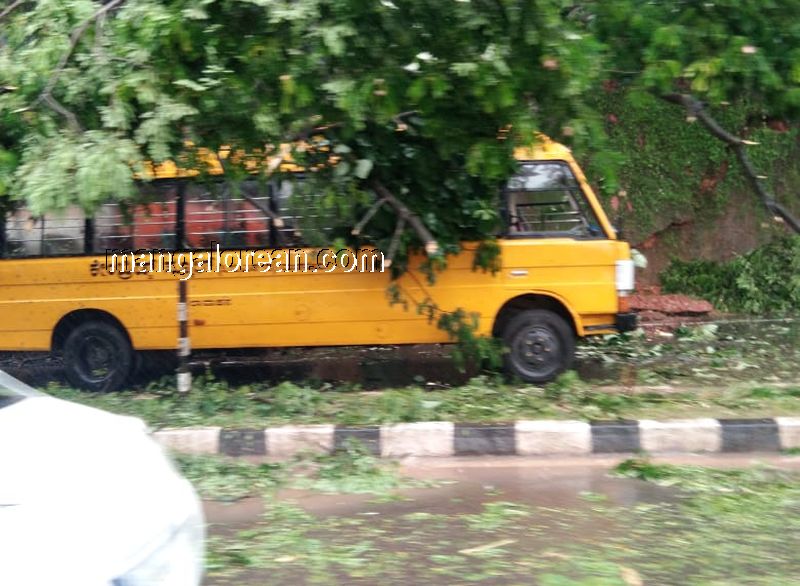 Most of the trees have no room for their roots to spread out and this leads to gradual decay. In other cases, growing trees had their branches cut regularly on one side because they leaned on to private property; the trees grew up lopsided and leaned far on to the roads. This means their remaining branches too were regularly being trimmed and they lost strength. The concerned authorities are expected to monitor a city-wide “tree census” to determine how many trees are really a danger to traffic or at risk of falling down during heavy rain and strong winds. Trees which are unable to bear the air pollution and decaying should also be identified. But seems like no one is doing their job right- and as a result, we have trees come crashing down on vehicles etc now and then.

While a few officials from MCC say that when they are ready to trim or cut down old and hazardous trees, they are usually stopped by environment activists or Forest dept officials- so they are in a fix. On the other hand, the problem with our MCC authorities is that they wait till the trees fall, and then only take action–like many trees had fallen due to rains recently, and also the one, today. The safety of pedestrians and of all road users should be the first and most important priority for National Highway authorities and also local authorities and also for a State body that has the responsibility in this area. Some of these trees may have a disease, which is a clear indication of root rot. Through this report, Team Mangalorean is asking as a matter of urgency with the concerned people at MCC and Forest department that old and hazardous trees are inspected and that those that appear in any way dubious should be promptly removed before they crash down resulting in injuries or death of motorists or pedestrians.